Send In The Clones

It is hard to say if cloning is an answer to a problem or just another problem for the human race. There have been books, movies, and even stories about mankind creating their own species of humans. A good example of what could happen if mankind learns to clone itself is Mary Shelly’s’ Frankenstein. A classic novel demonstrating what could happen when mankind takes the power of “God” in our own hands. Cloning is physically a new science but ethically is a century old debate.

Don't use plagiarized sources. Get your custom essay on
“ Send In The Clones ”
Get custom paper
NEW! smart matching with writer

A clone is a group of genetically identical cells that are borrowed from a single cell by asexual methods and used to create a new cell identical to the first ones.

Cloning happens everyday in the human body, muscle creates more muscle, the cells in the mouth, and the walls of the large intestines are constantly dividing. Besides for the human body, plants also are able to procreate by asexual means also create plants that are identical to them.

“The body cells of adult animals and humans can be routinely cloned in the laboratory. Adults cells of various tissues, such as muscle cells, that are removed from the donor animal and maintained on a culture medium while receiving nutrients manage not only to survive but to go on dividing, producing colonies of identical descendants.

By the 1950’s scientists were able to clone frogs, producing identical individuals that carry the genetic characteristics of only a single parent. The technique used in the cloning of frogs consists of transplanting frog DNA, contained in the nucleus of a body cell, into an egg cell whose on genetic material has been removed.

The fused cells then begin to grow and divide, just like a normal fertilized egg, to form an embryo. ” (Britannica) The process which was described on the previous page is the same way that human beings can be cloned.

The major misunderstanding is that all someone needs is a sample of DNA to put in this magical machine and a couple days later a fully grown identical twin is born. This is so science fiction that it is rather funny to the scientific community. The cloning of a human being would be a very difficult, time consuming, and risky venture. It took 277 attempts to clone “Dolly”, the sheep born as the first success in cloning an adult mammal. This was achieved in 1996 at the Roslin Institute in Edinburgh, Scotland by a team of British researchers led by Ian Wilmut.

The intent to clone a human

However, there is a group of people who have the intent to clone a human being within the next couple weeks. These people are the Raelians, they are a religion that believes that human beings are the result of a genetic experiment done by extraterrestrials named the Elohim. The founder of the religion, which has about 50,000 member, Rael was born to the name Claude Vorilhon. Rael has set up a corporation named Clonaid, which was founded three years ago with the specific intent of cloning humans. The company plans on charging 200,000 dollars for each cloned baby.

They see nothing wrong with this morally and will be beginning their first project in the next couple of weeks. ” The first baby would be the “genetic twin” of a 10-month old baby girl who died following an accident. The baby’s parents, a wealthy American couple, will pay “one million dollars to finance the first attempt”. (National Geographic Society) Clonaid plans on making this service available to anyone who can afford it and especially to homosexuals, infertile couples, and couples who have lost a child. Although it appears that they are attempting to provide a good-deed service to people who need it some experts do disagree.

Dr. Stephen Post an ethicists at Case Western Reserve University School of Medicine said; “The Venture violates several ethical principles Cloning Dolly took 277 attempts, that means there were 276 failures, In human terms that mean putting both the “gestating fetus” and the surrogate mother at risk for harm as the result of multiple miscarriages. The premise that one can replace a person with a clone is false because the cloned baby would be an individual and deserving of its own individual respect. ”

Post went on to say that he doubted that any certified qualified obstetrician would sign on to the Clonaid project. They may have a physician, but I would questions the qualifications of the physician, and any physician who participates should have his or her license to practice taken away for good” (NGS) Just to see the chances of a cloned embryo coming to terms look at the cloning of the Spanish mountain goats.

The guar is a species that has gone extinct. To create the guar clone 692 skin cells were taken from the last dead guar and fused with cow eggs which had been stripped of their nucleus. (The nucleus is comparable to the yolk of an egg. The 81 cow/ guar eggs that actually developed into embryos only 44 were implanted into cows.

Of that only eight cows became pregnant, and five of them miscarried. Of the three remaining, three fetuses were removed from two of them and the one remaining pregnant appears to be OK. So 81 44 8 1, one single animal from all that work done. Granted it is arguable that this was worth it to replace an extinct animal but the animal won’t even be pure guar. The newly born animal will have some cow DNA as well and now there will be a new species not the replacement of an old one.

Humans may think that we’ve found the answer to so many problems, when actually we have just opened the door to cloning, but that’s not the only door. Scientists seem to be the only ones who want to use this new technology with caution and reason. But yet the private sector just seems to be out there for their own interests. To be the first, be the best or to go down in history. They don’t seem to care of what a large responsibility this puts on the world as an entire population. Because it weighs down on us with moral problems, mental problems, and cloning problems.

Send In The Clones. (2020, Jun 02). Retrieved from https://studymoose.com/send-in-the-clones-new-essay 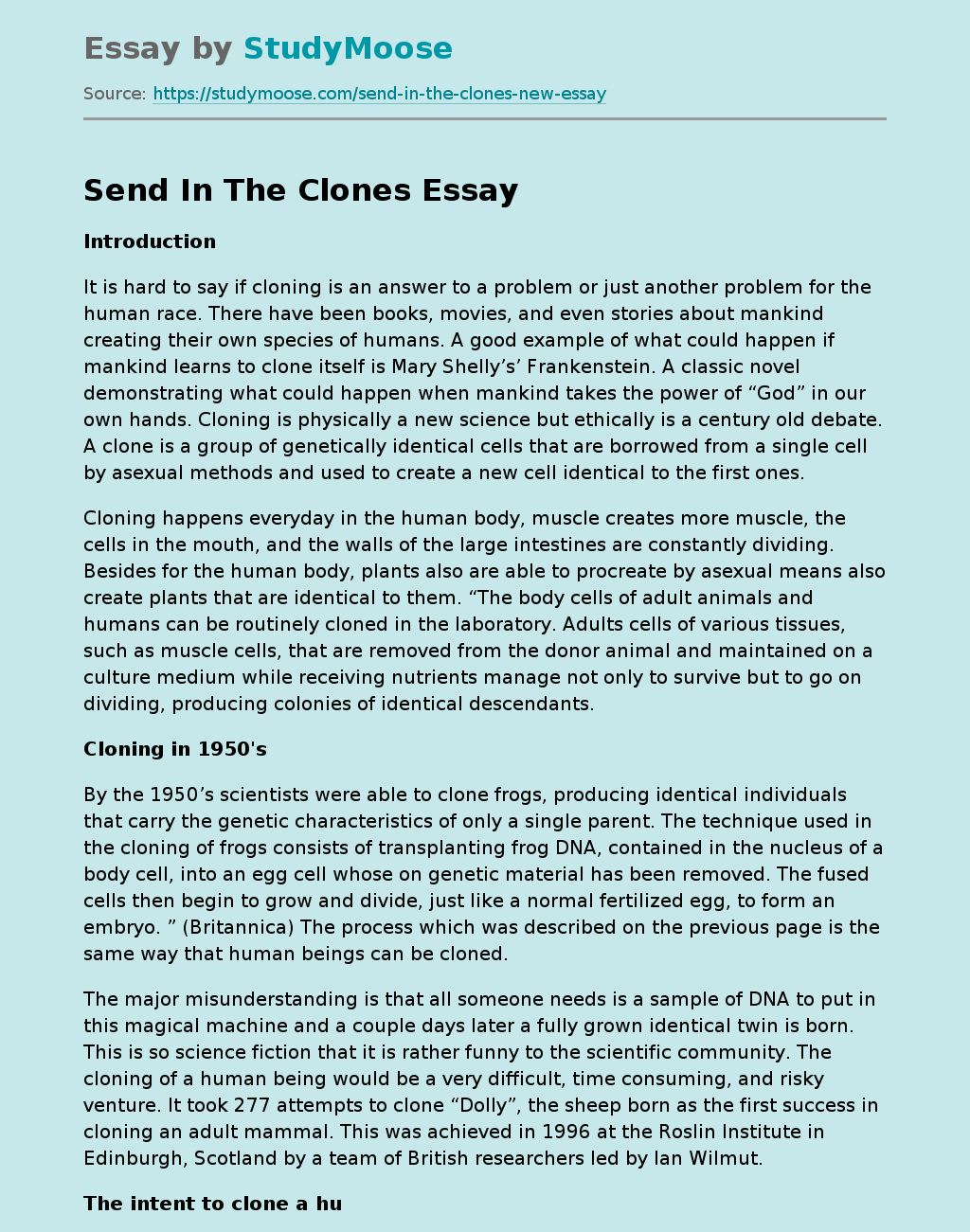