Senate to Blame for 49bc Civil War

o “The Senate was regarded as the central institution of the Roman state” (Beard and Crawford). o However during this period they did not live up to this duty to direct the Roman state. o Rather corrupt and after supremacy of the whole empire, using and manipulating certain power individuals in the form of PO, by breaking the constitution to achieve these means o It rejected and punished Caesar continually when he simply wanted equality to reach the same heights as PO.

Don't use plagiarized sources. Get your custom essay on
“ Senate to Blame for 49bc Civil War ”
Get custom paper
NEW! smart matching with writer

o This created monumental holes in the system and thus the true instigator of the civil war was not PO or JC, but the Senate. During period Senate adopted a policy of building up powerful individuals (PO) who were used to lead and direct the assembly only when it suited them

o 1) Allowing him to command an army at only 23, which led him to gaining his first triumph something not earned till the end of ones career or not at all o 2) Lex Gabinia- describe it & Lex Manilia o “His extraordinary career embodied everything the oligarchy opposed, yet they were largely responsible for granting many of his exceptional commands” Bradley The fault in this policy was made clear when these individuals became too powerful and together with their armies were able to lay siege on Rome and control all political aspects.

o One such example of this was his first consulship in 70BC. “He delayed disbanding his army despite orders to do so, therefore the senate had no choice but to grant him yet another illegal command” Bradley in the form of a special decree passed for him to gain consulship.

In the previous year the Senate passed a degree exempting PO from the usual age limit and experience of sub consular experience. o As such he was able to “vigorously help undo Sulla’s legislation by restroing the tribunes to their ancient powers” Suetonius o What the Senate allowed him to do as consul proved disastrous to the state as he set dangerous precedents and made it harder for the Senate to control him Perhaps what was most devastating about this policy was that it illustrated how popular generals could bypass the rule of the Senate. The fact that they had granted powers to PO because they believed he had exceptional leadership qualities, gave the ambitious JC sufficient reason to challenge their rule and stop at nothing with the prime aim of gaining equality. o “It is no lie that JC was ambitious but what he desired most from the Senate was equality between himself and PO” Cary and Scullard From the very beginning of his career the Senate showed inequity towards JC as he refused to break with his Marian connections.

This was evident when he vied for the consulship of 59BC as although rightly legible his attempts were meet with many difficulties by the Senate o As such they appointed him the wood and pastures lands as a proconsular command which was a slap in the face. “If anything further was needed to simulate JC to work with PO it was that the senate established a forestry command instead of the usual overseas command” Scullard o In addition to this the large success of Pompey had aroused the senates fears and distrust, and so they rebuffed him personally preventing him from fulfilling his promises to his veterans despite the fact that it was they who created him o Resultantly the first TRI was formed, and with the power PO wielded bcz of the Senate and with the assistance of JC, were able to govern alone.

Caesar was able to gain Gaul and PO get his acts ratified. o Senate became distressed by the fact that JC formed an alliance with their ‘golden boy’ PO as they knew very well their fears of JC rising to the highest power could became a reality. o “This first and worst disaster had not been the quarrel or split between PO and JC but the friendship which had existed between them” Cato o “In saying this then Cato must bear much of the blame for he and the optimates drove “Pompiues into Caesar’s arms”” Bradley and Seager which as Cicero recognised it, was the ultimate origin of the civil war of 49BC 52BC = Death of Julia + Death of Crassus + JC in Gaul = Senate slowly began taking advantage of situation at hand by slowly pulling back PO under the influence of the senatorial forces o Without hesitation 1)awarded rare sole consulship to PO

2) ignored JC’s plea for praetorship in absentia in 49 o the 10 year interval between consulships is ignored 55BC being his last one, “which meant putting the whole Roman empire into one’s man hands” Suetonius Sole con = Senate worked through exploiting and manipulating PO’s weakness of always wanting popularity and praise, to enact laws threatening JC o Senate = puppeteers pulling PO’s strings getting to JC THEREFORE obvious of their hidden agenda planning against him thru PO o xThis forced PO “to wonder if the triumvirate was of any benefit to him now” Bradley which ultimately broke down the triumvirate, meaning not only were they responsible for forming it but at the same time destroying it As such JC knew time was at the essence and made 1 last appeal to be elected in absentia BUT denied despite the fact that “the demands which Caesar made had the fairest colours of equity imaginable”- Plutarch o It therefore became clear that ‘The senatorial optimates would now go to any lengths to break Caesars power’- Hennessy Knowing JC’s ‘dignatus was dearer to him than life itself’- JC the Senate recalled JC to Rome hence justifying that demand was not for recall but an invitation to civil war o ‘Caesars immediate recall to Rome was in fact an invitation to civil war. Their feud with Caesar had now become a greater object than the welfare of the state’- Cary and Scullard

Senate to Blame for 49bc Civil War. (2020, Jun 02). Retrieved from https://studymoose.com/senate-blame-49bc-civil-war-new-essay 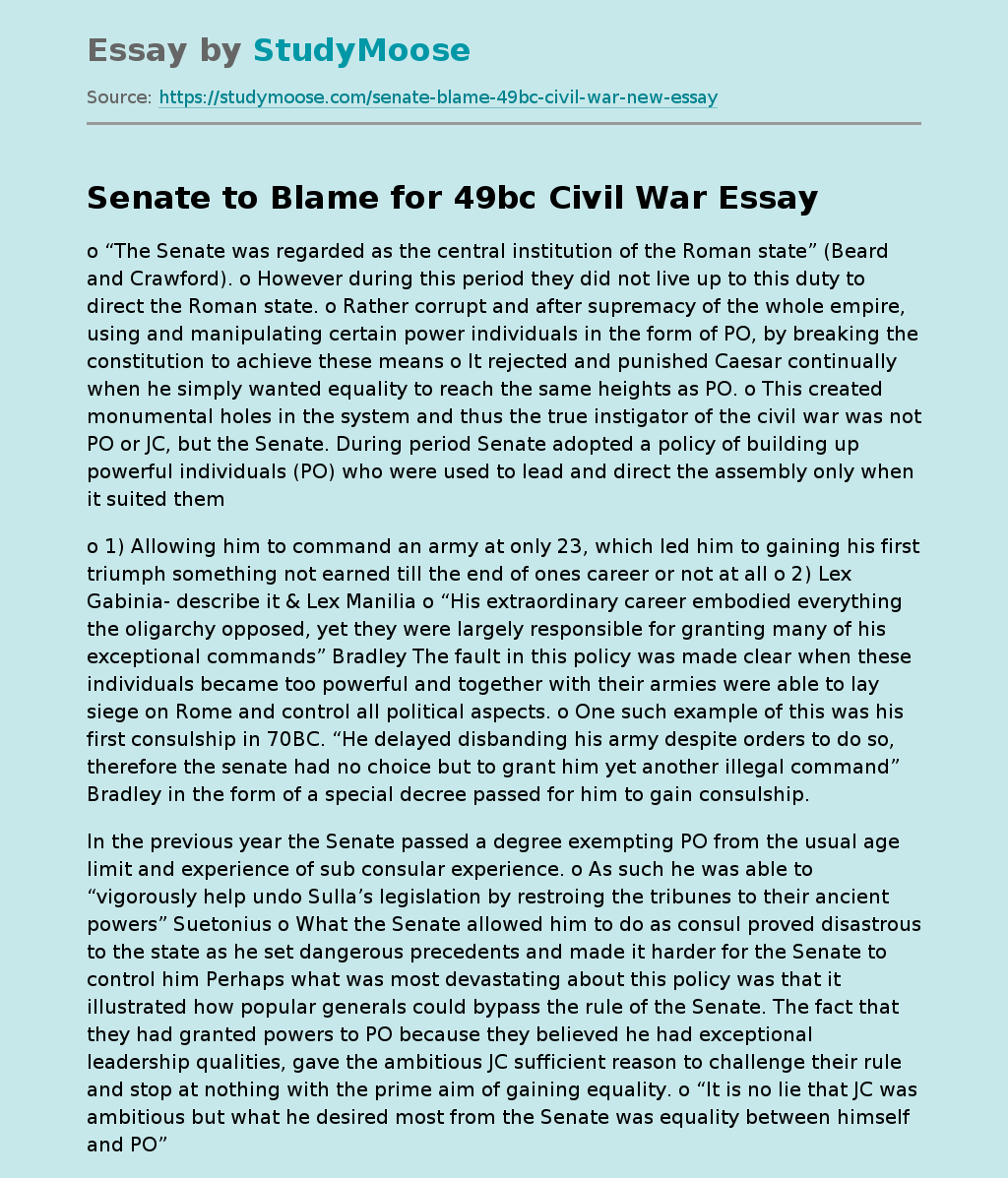