We have read a book called The White Tiger and seen a movie named Slumdog millionaire. These two stories take place in India, a place where the difference between rich and poor is extremely clear. We have learned that a successful life doesn’t come cheap, it often comes with a lot of baggage which reveals in both stories. Slumdog Millionaire and The White Tiger have many things in common, so we are now to compare the similarities between them.

In the White tiger we get to follow Balram on his journey from poverty to richness.

Turn in your highest-quality paper
Get a qualified writer to help you with
“ Semilarities White Tiger and Slumdog Millionear ”
Get high-quality paper
NEW! AI matching with writer

He comes from a small village in India called Laxmangarh. Balram was born to be a smart kid and everyone knew how special he was. His teacher loved him because he knew that Balram was different. He had something out of the ordinary, something that the other students never had. Unfortunately he was forced to drop out of school, by his family, in order to help raising money to pay back a big amount of debt.

After quitting school, Balram worked at several places where he got to learn different things. All of the experiences made him, as they say, “street-smart”.

As for Jamal, who is the main character in the movie Slumdog millionaire, his childhood hasn’t been the easy part of his life. He comes from a poor, small village in India as well as Balram. In early age, Jamal lost all of his family members, except his brother who he had to grow up with and but never be close enough.

The tragic loss of their family made both Jamal and his brother, Salim, fully strong to handle things on their own. They went from one place to another in order to find some food, a place to overnight and simply survive to see the sunrise the next morning. Just like Balram, Jamal learned a lot from his experiences through life that made him to a smart, strong and very intelligent young man. He was even smart enough to win the Indian version of “Who wants to be a millionaire?”.

As we mentioned before, their journeys to successful life hasn’t been easy. There were a lot of bumps along the way, but they made it through because of their strong desire to succeed. Slavery was one thing that Jamal and Balram had to go through to come out of the poor circle that they were trapped in. Servant, driver and making sandwiches were those things that (…..)They had different goals but in the end, they both got what they wanted.

Balram got the freedom that he always reached for and Jamal got the love of his life, the girl that he fought for the entire journey. The conclusion of our article is that anyone can succeed no matter what. You don’t have to be rich or famous to be successful, but it is small things that count. Never give up on your dreams, because you never know how close you are to reach them. Both Balram and Jamal fought through the winds and waves to reach their goals. The willingness of the stories shows us that anything is possible in our lives. 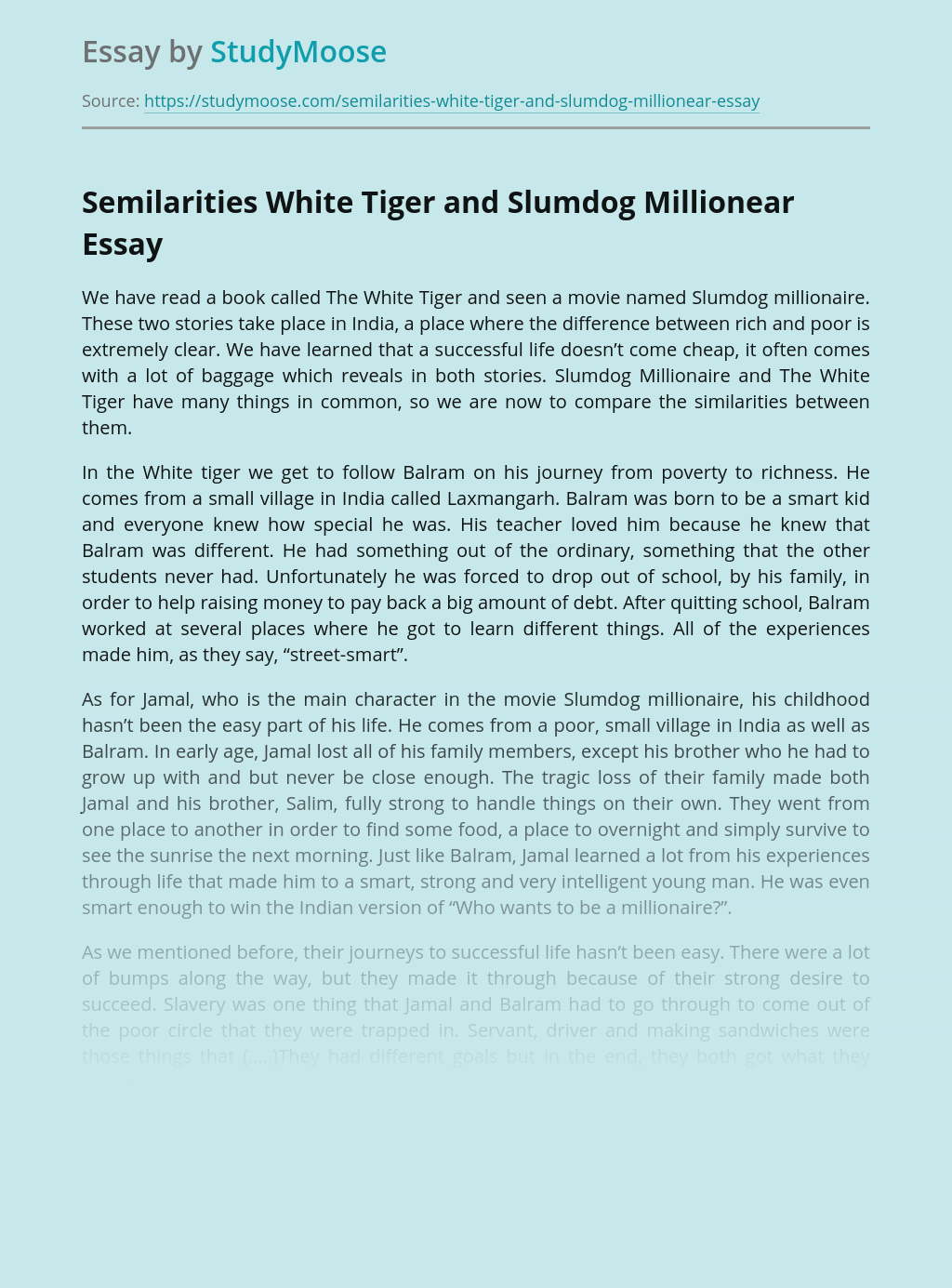 Turn in your highest-quality paper
Get a qualified writer to help you with
“ Semilarities White Tiger and Slumdog Millionear ”
Get high-quality paper
Helping students since 2015
Stay Safe, Stay Original