The novel, parable of the sower was authored by Octavia E. Butler. The novel was published in 1993. It is the first book in a two-book series of science and fiction books written by Octavia E. Butler which is set in a prospect where the government has collapsed. The novel is centered on Lauren Olamina a young woman who has the ability to feel and perceive pain and many other sensations of others. She develops a benevolent religious and philosophical religion in her childhood in the remaining parts of a gated community in Los Angeles (the writer has dubbed this hyperempathy).

Don’t waste time
Get a verified expert to help you with Self-relience and Drug Addition in Butler’s Novel
Hire verified expert
$35.80 for a 2-page paper

During that time, there is increased resource scarcity and high levels of poverty which has led the civil society to revert to relative anarchism. As soon as the community’s security is compromised, her home is shattered and her family is murdered. After the incidence that led to loss of her parents, Lauren Olamina travels to North together with other survivors to go and try to start a new community where her faith- Earthseed can grow and thrive.

The novel describes the conditions the society is going through in the city of California in 2024. The city has turned to hell and this has led to creation of three classes of people who are miles apart financially and in their societal status .i.e. the poor, the middle class and the rich. The poverty and insecurity levels not only in California but also in the whole of America are very high with different politicians giving empty promises on how they will alleviate the situation.

Against such unpleasant background, Butler presents her intelligent heroine, Lauren who is believed to be thoughtful and independent girl who apart from thinking about herself she suffers from what the writer terms as “hyperempathy syndrome”- She is exceedingly sensitive to the agony of others, feeling it as if it were her own. It is this feeling that keeps pressuring her to change not only the belief system but also economically change the society and redeem her people from the anguish they are going through. Lauren does not acknowledge the belief system of her elders but make an effort to start her own system that is true according to her experience and that is accorded with common sense and observation. From the novel we get to know that Lauren acquired the “hyperempathy syndrome.” from her drug-addicted mother who died while giving birth to her.

There is no freedom in Laurent’s society. At the onset of the novel, we find Lauren, her family and other families that live within the walled neighborhood living as virtual prisoners. Any time they want to go outside they must be armed. They live under endless siege resulting from drug addicts and thieves who aimlessly wander the streets outside. These drug addicts are desperate and many a times they break into their neighborhood, burn, steal and rummage whatever they can. In Laurent’s society, there are is no potentials for the young that are within the walls-they will continue to get poor due to lack of jobs and their lives continue to worsen slowly. For example what Bianca Montoya-seventeen year old expects when she marries is to live in a garage-like house. The national government is helpless to improve the condition.

The sole option for Laurent’s people is moving to urban of Olivar’s company. But for the people who consider this option, they do so for the sake of their security and not for freedom reasons since the company will assume responsibility of each part of their lives- Lauren refuses to go to Olivar. She instead journeys to the north for freedom despite the fact that she is aware of the danger of thejourneyand she does not clearly know her endpoint. Most of those people that travel with her are doing so as to escape virtual slavery. For example Zahra Moss escaped frequent fight from her husband, Allie Gilchrist and Jill were escaping slavery from their father who had forced them to prostitution and Jill and Allie Gilchrist was running from her employer who is enslaving her due to her debtr. Laurent’s arrival at Bankole’s property gives her to choose on of whether to stay there or not. Though survival in this new place is challenging, they have the privilege of freeing from outside oppression unlike their counterparts who sojourned to Olivar. (Butler 204).

From the novel, the author tries to point out the theme of Self-reliance. For instance, even when Laurent is young of age (at the age of fifteen years) she already has the knowledge of the state of her community-that it is doomed and that no one is ready to deliver it from the turmoil. This encourages her to live a self-reliant life and not to depend on any external authority to help her such as the police who are very corrupt-the rule of law in the community has broken down. This also encourages her to read everything that would help her know how to continue to exist when the time is ripe for her to leave Robledo (her community). For example, she learns how to use guns and how to handle medical emergencies. Once they start sojourning, Laurent and her group survive because of attentive and using their resources in a more wise way. After reaching the land where they intend to build their first Earthseed community, they still require to be self-reliant. Since there are no careers in this new area where they build their first Earthseed community, they have to nearly start from scratch and upkeep themselves by what they can cultivate and sell. Self-reliance therefore becomes a basic principle of the Earthseed religion. According to this religion which was founded by Laurent, it is imprudent for people to foolishly wait upon God to come and help them –they have to toil so as to bring food onto their table. It is their obligation to mold their own destiny based on their personal efforts. (ch. 11).According to Butler (158), the novel also shows the collapse of community and the steady reconstructing of another one. Societal orders are almost broken in Robledo in 2024 and the only places where community seems to exist is within the walled areas in which the middle class and the rich people live a normal live.

Though the people in the walled areas where the middle class live do not like one another, they take the responsibility to defend their neighborhood. This community is doomed and at the end when it is invaded; there is nothing left but pandemonium and anarchy. In this chaotic world, Laurent and her community must learn the links of affection and trustworthiness that bring bond people in unison. In Laurent’s new community, there is sense of community-hood, togetherness and loyalty to the ideals of the society. For example, after Jill Gilchrist is killed, Lauren consoles and comforts Jill’s sister, Allie (Ch. 24). This is advancement on the process of forming the Earthseed community of people that share common values and value one another. (Butler 182).

The novel also reveals a poor religion which Laurent is against. According to the Baptist religion where Laurent’s father is a minister, they foolishly depend on God. They believe that their God can do everything for them and therefore there is no need for struggle. This kind of religion has contributed to the increased levels of poverty in the community. This is why Laurent challenges her father’s faith. She completely rejects his father’s religion and instead creates her own-Earthseed which exclusively believes in toiling for one’s survival instead of foolishly waiting upon God. (ch. 7).Contrary to Laurent’s success after challenging her father’s religion, Keith-Laurent’s young brother after challenging his father religion chooses a detrimental course which ends in his demise. He struggles to be independent by running from his father’s religion but this independence costs him his life (ch. 9).

According to Margalit, Even though America is still in presumption democracy, there is no one in Laurent’s family and neighborhood that is ready to vote except her father. Basic goods are scarce and high-priced. Outside the enclosed neighborhoods, there is anarchy. People have entered in all types of depression. For example, drug addiction and disease is rampant, corpses lie all over the streets and many people are starving and homeless. The federal government keeps talking about alleviating the situation, but it is basically immaterial to most people’s lives. The police have worsened the situation also as they charge a fee before investigating a crime. 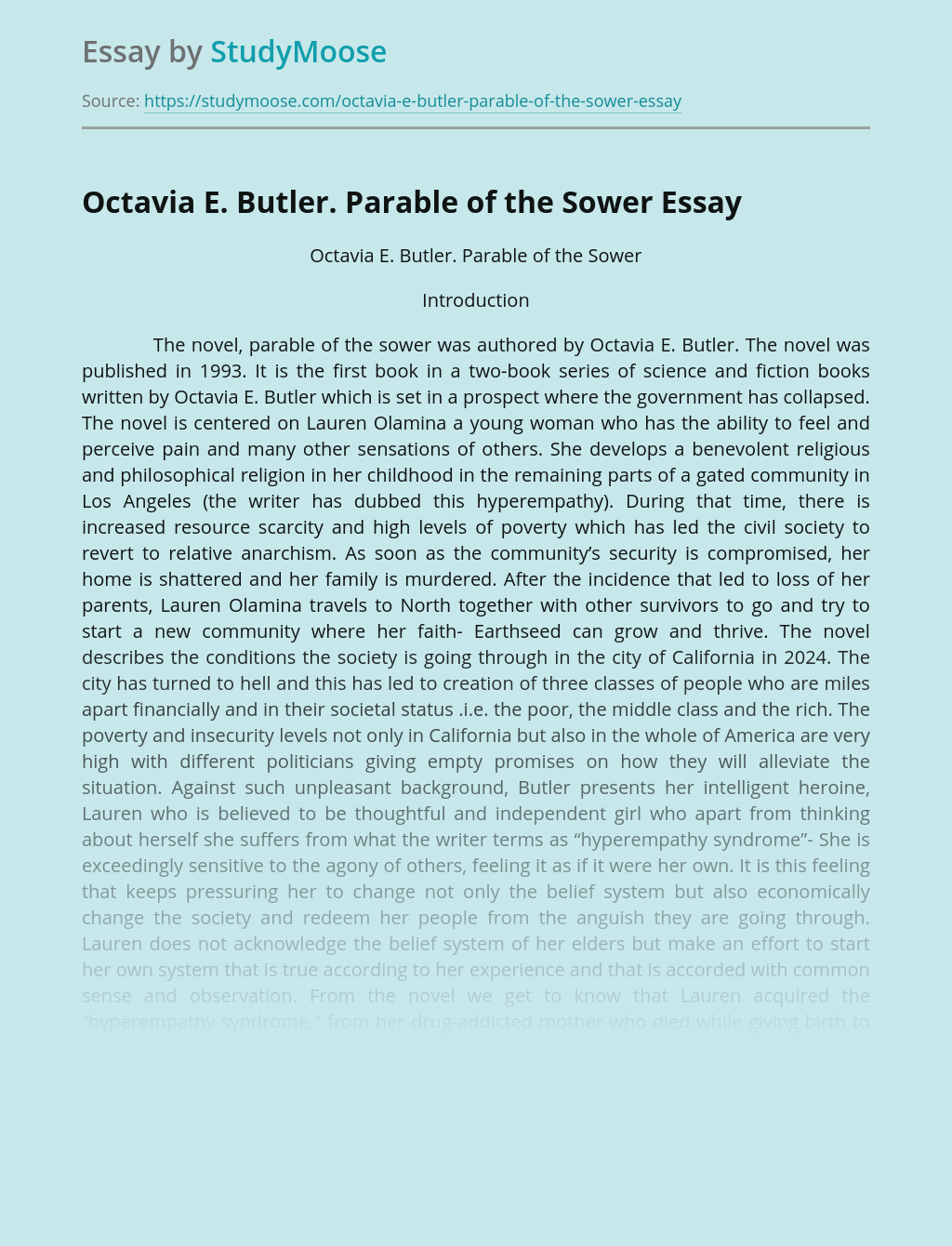 Don’t waste time
Get a verified expert to help you with Self-relience and Drug Addition in Butler’s Novel
Hire verified expert
$35.80 for a 2-page paper
Stay Safe, Stay Original