Get a verified writer to help you with Self Identity

Moreover, as an individual grows up from being a child, they receive cultural values from the family or the society around. There are questions raised on matters dealing with identity: Can an individual choose his or her own identity? If yes, how much can one choose? Identity is a very complex issue. It comprises of many inner qualities, as well as outer representations of an individual. There are numerous characteristics that do define what an individual is made up of.

The self can include things like gender, sexuality, and sense of belonging to a family, culture, nation, or any other group.

An individual’s identity incorporates the personality, looks, fears and beliefs. It is important to note that, the identity of an individual is not permanent. Moreover, nowadays, surgery can be done to alter the face or shape of an individual. There are also numerous books and workshops that have come up to help individuals grow personality. This means that people nowadays have greater choices in developing their self-identity.

Self-identity is influenced by how an individual lives, the work they do, and the way they carry themselves. It is also determined by perspective. The people around a person have different perceptions about an individual. They also affect how a person will behave or carry themselves. Identity has been equated to images and masks. This is because many individuals would mould themselves to be what a certain society or family wants them to be (Missy & Alan, 2004, 497).

The current forms used in social communication like the films, including the society rules, perceptions and many more others, play an integral part in shaping an individual’s identity. The question is how do these issues affect self-identity? It is certain that people could choose what to do or wear, but what influenced these decisions?

Scientific research has it that, beliefs, traits and emotions can be factors inherited from parents through the DNA. The memory of an event experienced by a grandparent could be passed through generations. This means that there exist certain identity traits in the genes of an individual. Images of violence or shows that are less empowering could have a certain negative amount of influence in self-identity. A grown up also faces pressure from family and community beliefs, which make them put on a different piece of identity from their own.

A theory known as the postmodern theory, explains that identity has become a mask put over an individual, and not from within. The mask is created as a result of influence from external forces that dictate what is right and what is wrong, or what is normal and accepted. The postmodern theory goes ahead to stipulate that, as an individual, one creates a self-identity through these external influences. People do this so as to fit into the environment around them. In the United States, for example, there is a tendency of consumer culture to influence the way most Americans think and make decisions.

Giddens has described that the lifestyle of an individual include a routine of practices, which are vulnerable to change in the nature of self-identity (Giddens 1991, 81) However, not all choices are open to people (Giddens 1991, 81). One other important question is how is cultural self-identity defined? Are they imposed on people or self-chosen?

People who are bi-cultural always find themselves in a hard position trying to adopt a culture or creating their own identity. These types of individuals go through an identity crisis. This is where families come in to play an important role in instilling values into these individuals. There have been cultural and national identities created by other people that are harmful to the self-identity of an individual. This means that individuals can face a hard time trying to adopt other cultures apart from their own. There are certain values that could be seen as imposed to the members of that particular society.

There are people who have had identities thrusted upon them that don’t reflect their own. For example, an American Muslim would always feel like a terrorist in the United States. This means that the Islamic culture influence affects their identity in a negative manner (Fin 2001). The today’s world poses a challenge to individuals in choosing their identity. Although one has an authority in deciding on how to live, there is a fraction of traits that have had an external influence.

An individual is influenced by the environment around because no one can survive by themselves. There are social structures that individuals are in, they also descend from a certain family, and are interconnected with other people. A genuine choice in creating a self-identity can be possible if individuals embrace the various influences assets and decide on how to use them in their lifestyles.

In conclusion, a child who is growing up experiences cultural identity. The family teaches these children about their culture as well as religious traditions (Missy & Alan, 2004, 506). These cultural practices could be passed on to the children during meal times, religious practices, or various different celebrations. These experiences add up to either enriching or influencing the self-identity of a child. An individual can also develop a self-identity after the influence they receive from interacting with the family members. An individual can also form a group identity and social identity by their affiliation to various groups. Self-identity refers to an individual’s knowledge, in addition to the understanding of his or her self.

Self Identity. (2017, Jan 06). Retrieved from https://studymoose.com/self-identity-essay

Get a verified writer to help you with Self Identity 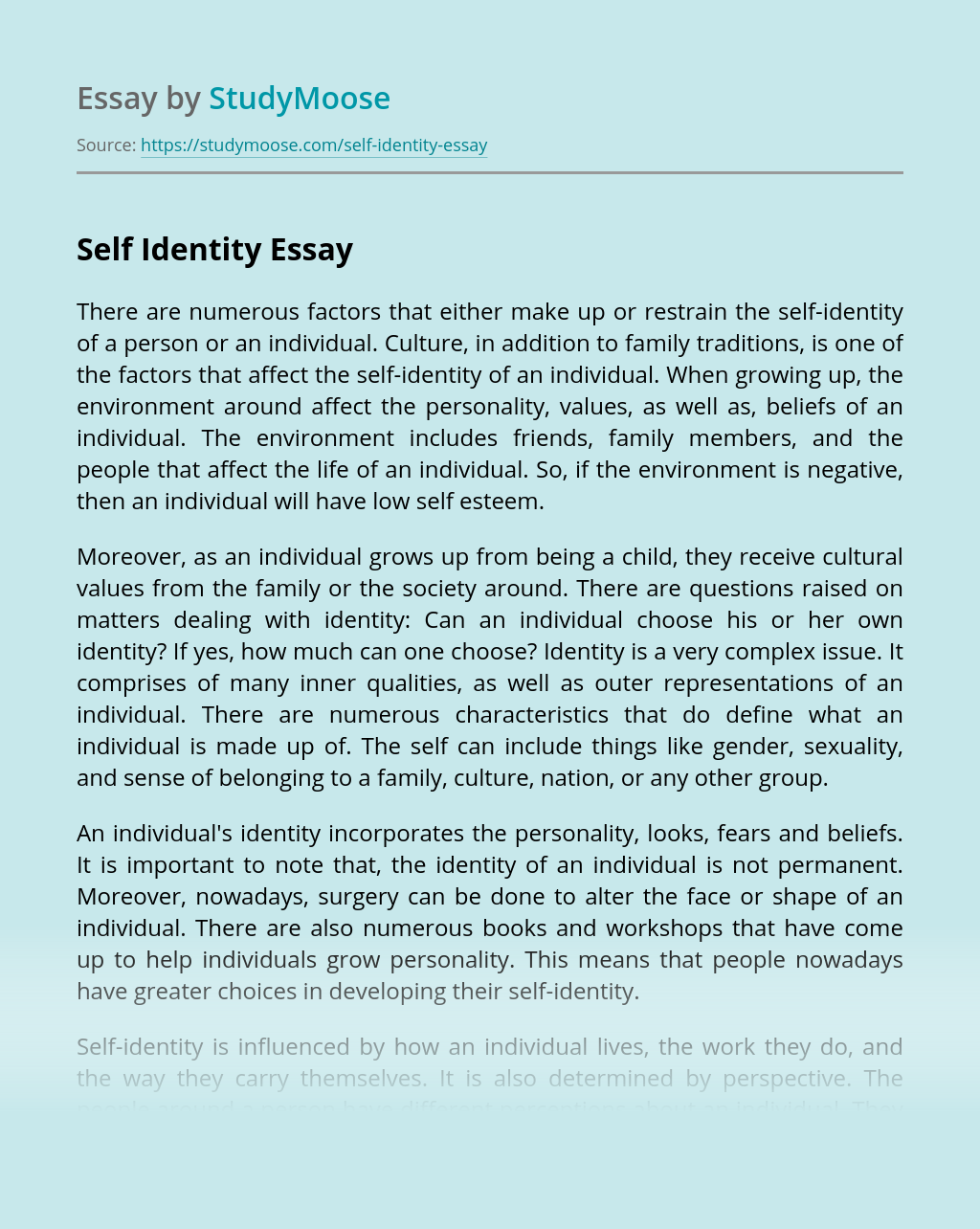 ‘Knowing where you belong is essential to our sense of identity’ The quest for personal discovery is a journey which every individual must undergo. The development of a sense of self is one of the greatest achievements one can derive from life. Identity is made up of a constellation of characteristics, none more essential than...

Our language our identity

Identity can be perceived through language; is one of the many ideas that are illustrated throughout Gloria Anzaldua’s “How to Tame a Wild Tongue”. The language you speak is a part of your culture, and your culture is what defines a person the most. Living in a country that is seen to be melting pot...

Get Essay
Identity and Sense of Belonging

1. Familial and societal values and expectations define who we are. Our parents are at the centre of our upbringing and teach us values, attitudes and beliefs that help to define us from our conception and birth. Family expectations can either act as a burden on a child’s sense of self and abilities, or an...

Analysis of 'The Presentation of Self in Everyday Life'

Erving Goffman’s The Presentation of Self in Everyday Life provides a detailed description and analysis of process and meaning in everyday interaction. Goffman writes from a symbolic interactionist perspective, emphasizing a qualitative analysis of the components of the interactive process. Through a sociological analysis he explores the details of individual identity, group relations, and the...

Discuss Research Into the Nature of Relationships in Different Cultures

Relationships Discuss research into the nature of relationships in different cultures. (9 marks + 16 marks) In Western Cultures, it has been found that relationships are voluntary, temporary and focus on the needs of the individual as due to the predominantly urban settings in which we live in, we are able to (on a daily...

Basic concepts and theoretical perspectives can be introduced in ways that students find accessible. * Primary socialisation and secondary socialisation; feral children (unsocialised). These examples can also be used to introduce the nature/nurture debate. • Socialisation as a process throughout life, including resocialisation (for example, to a different culture, or to life in an institution)....

Relationship Between Clothing and Identity

I What is culture?

I. What is culture? a. Culture According to UNESCO, the set of distinctive spiritual, material, intellectual, emotional feature of society or a social group that encompasses, in addition to art and literature, lifestyles, ways of living together, value systems, traditions and beliefs (Chernotsky and Hobbs 187). b. Culture Shock is physical and psychological response to...