Self-efficacy is a key concept

In the social cognitive theory, the term self-efficacy is a crucial concept. Experts regard it as one of the most popular hypotheses concerning human learning (Ormrod, 2008). The theory of self-efficacy is about learners’ beliefs regarding their capacity to fulfill specific tasks. Bandura, as well as many other researchers, have shown that self-efficacy influences endurance, motivation, efforts, performance, behavior, and success.

Don't use plagiarized sources. Get your custom essay on
“ Self-efficacy is a key concept ”
Get custom paper
NEW! smart matching with writer

Therefore they need to be distinguished clearly. As mentioned above, the term self-efficacy is about an individual’s confidence relating to their ability to fulfill a task successfully. On the other hand, attitude is about an individual’s opinions regarding a duty. It is related to an individual’s feelings towards the task being enjoyable, significant or challenging. Students who have a positive attitude towards maths are likely to think that finding a solution to math problems is pleasant and has significance to their everyday life.

Although the students may assume that math has importance, they may or may not suppose that they can solve a mathematical problem.

Therefore students with a positive attitude towards math may possess a low self-efficacy. Contrarily, if the students believe that learning math has importance for them, they are likely to develop persistence toward learning math and ultimately develop a high level of self-efficacy. Research on math education demonstrates that numerous studies have explained the correlation between success in math and attitude towards math.

The causal ordering between success in math and attitude towards math is based on the structural equation modeling (Ma and Xu 2004). According to the results, only one of the paths from prior attitude to later success had significance, and the standardized path coefficients ranged from .03 to .13. In addition to it, the paths showed significance from prior math success to later attitude to math, and the standardized path coefficient ranged from .11 to .23. According to these studies, it was found that attitude towards math is a primary predictor of achievement in math, and moreover, the causal correlation between the two concepts was distinguished. Even though there are various studies regarding the relationship between success in math and attitude towards math, there wasn’t enough research examining the correlation between self-efficacy and success in math. However, there is no study with large-scale samples conducted on this particular correlation across the nation.

Randhawa, Beamer, and Lundberg (1993) examined the function of self-efficacy regarding math and math achievement based on structural equation modeling. They used the Mathematics Self-efficacy Scale (MSES) to assess students’ level of confidence in participating and completing math courses, solving math problems, and carrying out daily life tasks related to math. Results showed that attitude towards math had both directly and indirectly affected math achievement; however, self-efficacy was a mediator variable between attitude and achievement in mathematics.

Self-efficacy is a key concept. (2021, Dec 03). Retrieved from https://studymoose.com/self-efficacy-is-a-key-concept-essay 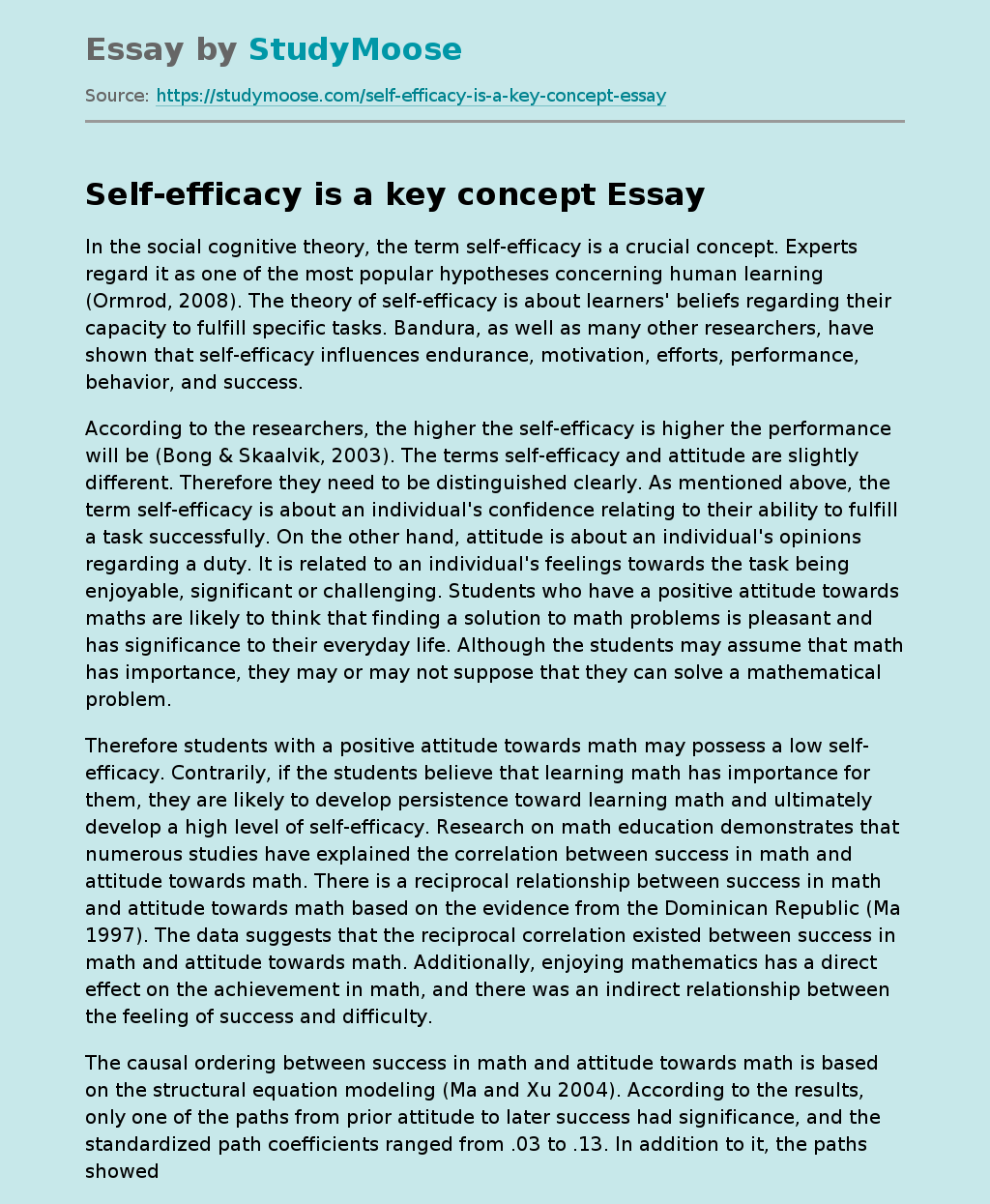