Self Confidence, Optimism and Success

Optimism- hopefulness and confidence about the future or the successful outcome of something
Reality- the world or state of things as they actually exist, as opposed to an idealistic or notional idea of them

Don't use plagiarized sources. Get your custom essay on
“ Self Confidence, Optimism and Success ”
Get custom paper
NEW! smart matching with writer

When you’re thinking of reality, you’re seeing things as they really are. There are some people who are pessimistic, and they see things as worse as possible, and they aren’t bright at all.

The reality of it would be, “Are we really sure that the glass is half full? You never know, it could always be half empty.” The optimism would be, “The glass is definitely half full because you are already filling it up.” Also, no one knows which side is right and which side is wrong. Even though both sides still think that they’re right, there could always be mistakes. For example, if the optimistic person were to accidentally fill the glass over halfway, and then the realist would soon think that they’re right.

Also, the pessimist would not know how to explain something like this, because they also didn’t have a cup to fill with water.
The definitions explain the differences between optimism and reality. A way to remember these words is, by remembering optimism is the brightest way you could. Remembering reality is by not thinking about the bright side and you think of things as the most realistic way possible. Also, when people think of optimism versus reality, they might think of it as a way of arguing. In most ways, it truly isn’t. One way is, if someone were to write an essay on this subject, they would choose either optimism or reality. If they chose optimism, they would write about how the subject would go, and they would look on the brighter side for things. If they chose reality, they would look at things and describe how they really are, so they would once again look in a realistic way. These two words also not only show how someone might be, but how they act.

Most people don’t know how to respond to subjects like these, and that’s okay. It might be a slight bit confusing, and it might get easier as they move forward with the subject or topic. Also, learning more about it might help with the confusion. Research, and writing could help with learning about how the subject might go. If you take the sentence, “Optimism is usually viewed as an attribute, but many people believe it is only really helpful if it’s realistic,” you may figure out what optimism can do for reality, just by looking at the sentence and thinking. The way that we view life tends to have a dramatic impact on how we behave. A realist and optimist aren’t the only people in the discussion. There’s the pessimist, and they see things in the darkest way, so they may seem like they’re the opposite of an optimist.

Our behavior can do some good things for optimists and realists because it can tell how we view our life. The optimistic person has a good, strong attitude. The realistic person has the “Well, do you really know how it would go?” attitude, and they’re also not very sure about things. Also, when realistic and optimistic people are deciding on something, they may start to argue a bit, but they will soon get over it. When optimism and reality come together, they can have some good roles in our lives. Whenever I say this, it means that optimism and reality have a 50/50 percent of the good and bad things in our life, and most of us don’t even know it.

Optimism is seeing the good, positive, and even better things in our life. It plays a pretty good role in our life, and most of us may not have optimism. If you’re playing a sport, the optimism would be hoping that you’d get that amazing play, and soon win. You would encourage everyone when they aren’t being optimistic, and you would also encourage them to get into what they’re doing, and you would be happy for them. Another example is an essay that you have to write, and the topic is not easy. You’re very optimistic that you’re doing great, and then it has to be 4-5 minutes long. Then, you might start to think, “What if this happens?” but, you shouldn’t give up. If you do start to think that, then your optimism would turn into reality. You haven’t given your hopes up yet, though. You are still very optimistic about things, and you’re excited when you are finished. Your essay soon gets handed back to you, and it has an astonishing grade on it. Your optimism helped, and you never gave up! But, that’s when the reality comes in.

Reality is when you’re not as optimistic, and you’re seeing things how they should be. Reality doesn’t play as big of a role as optimism does, but it’s still good for it to be in your life. Think of research on a bridge, for example. You are with an optimistic person, and they say that the bridge is still very strong. The reality of your thinking would be “Yes. But do we really know how strong this bridge really is?” Once you mention this, you really get to start to think hard. Also, if a person may not know what reality is, it’s not a bad thing. A lot of people don’t know it, and some do. A lot of us use reality in our lives, and we may not even notice.

Self Confidence, Optimism and Success. (2021, May 18). Retrieved from https://studymoose.com/self-confidence-optimism-and-success-essay 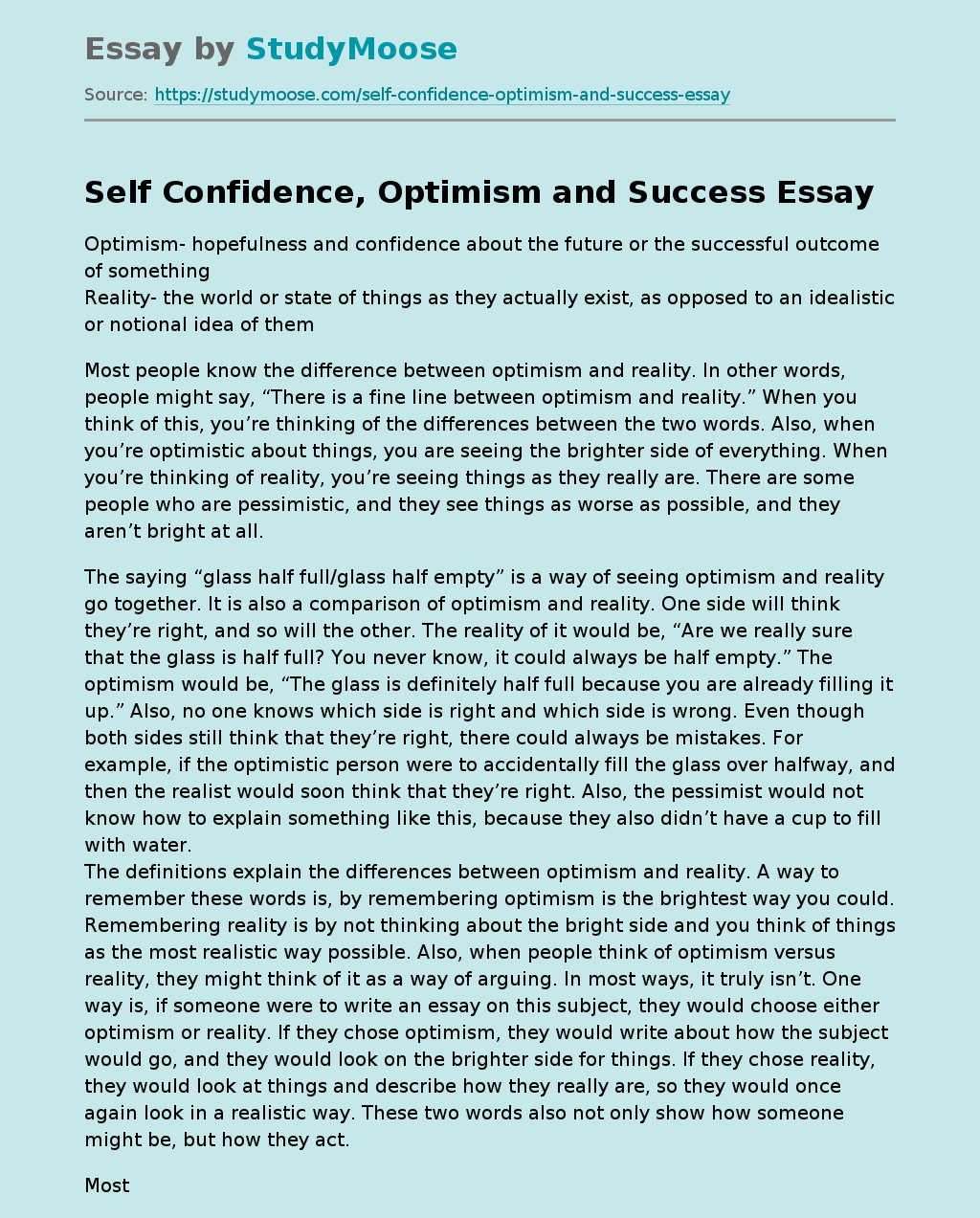