In Society, Many people conduct themselves unsympathetic towards one another. A great example of how someone would treat one another in society is in Willa Cather’s short story “Paul’s Case”. Where the Protagonist, Paul, displays a lack of sympathy in the way he conducts himself when he confronts himself with people and stressful situations. For Instance when Paul was “questioned by the Principal as to why he was there, Paul stated, politely enough, that he wanted to come back to school’” (pg171).

Don't use plagiarized sources. Get your custom essay on
“ Self centered ”
Get custom paper
NEW! smart matching with writer

Even though, he said politely that he “wanted to come back to school”; he lied. Although, it is important to reconsider that Paul didn’t say anything else, due to fear of disapproval from his father.

What was more inappropriate was his appearance of the scandalous red carnation in his buttonhole that he wore to the principal’s office that showed he had a lack of submission towards authority to his teachers. Furthermore, when also confronted by his teacher while he ushered at Carnegie Hall.

Paul reflected himself “the tickets had probably been sent her out of kindness”(pg 173), While adding “she had no business amongst these fine people and gay colors” (pg173). By reasoning this way, Paul shows no compassion towards anyone he knows that may be able to receive the rich possessions or entertainment that he longed­for. That he would have never experienced unless he ushered at Carnegie Hall.

Self centered. (2016, Sep 10). Retrieved from https://studymoose.com/self-centered-essay 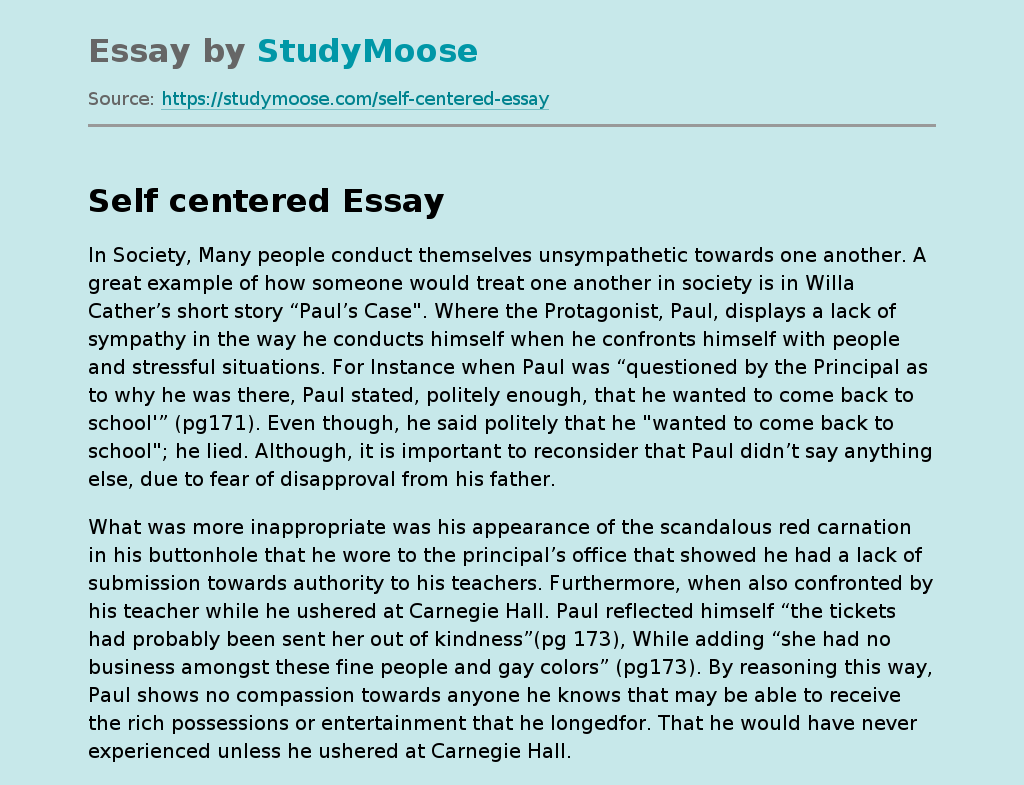