Protecting the user identifications in the network is an important task because they are located everywhere, such as airport lounges, hotels, hospitals, Bank, business centers, and cafes. All sorts of attacks may happen in such location, including key logger, malware, and phishing. So that it is needed to define an authentication protocols is highly important. Hence, this paper we define a threat model and identified that scheme is secure. We classify the following attacks in this authentication category such as password change attack, dictionary attack, brute force attack, impersonation attacks, forgery attack, stolen verifier attack, Replay attack and stolen smart card attack and GW bypassing attack [24].

Don't use plagiarized sources. Get your custom essay on
“ Security Analysis – User Identifications in the Network ”
Get custom paper
NEW! smart matching with writer

In case the illegitimate user Ul gets access to the smart card and extracts ei and fi, they still needs to enter correct biometric Bioi as input to proceed further which are impossible to forge.

The illegitimate user can be extract the security parameters of messages are like {M1, M2, M3, M4 and Ti} from the transmitted messages between GWNi and SNj for the brute force attack. Even the illegitimate user obtained these security parameter, they still could not find the password UPWi as the IAS secret key MK and also Secret keys of PKi and PKu. Therefore, the proposed scheme can resist the brute force attack.

In this attack, an illegitimate user Ul computes Message M1 = h {UIDi, PKi, UPWi} and try to pretend to be a user Ui by sending a valid login and authentication request message. But this is absolutely impossible, because they would not know UPWi and UBioi. Suppose that the illegitimate user Ul computes the following forged message M = {M1, M2, Trs, UIDi}, and sends the message to GWNi via SNj.

An attacker who steals the password verifier (e.g., hashed passwords) from the server can use the stolen verifier to impersonate a legal user to log in the system.

Our proposed scheme is not used any password tables, so there is no way that an illegitimate user Ul could not gather sensitive information of the user Ui. Thus the illegitimate User Ul could not try and impersonate a user on any other network. Furthermore, when the user Ui initiates the authentication phase, the gateway node GWNi forwards the message to the SNj sensor node so that the illegitimate user Ul cannot extract user Ui password from the message M1 = h { h { h { UPWi, PKi }, Xs } Xs, Trs}, because it is a complex one to calculate due to the one-way property of the hash function. Thus our scheme is resilient against stolen-verifier attacks.

Many cryptographic authentication schemes are used for securely store the user data in the smart card. Smart cards are in general tamper-resistant and are safe against simple information stealing. Let us assume a smart card has been lost by or stolen from a user then the illegitimate user has achieves the control of it. The illegitimate user Ul can crack the smart card and obtains the information of {MIDi, ei, fi, Xg } which is stored in the smartcard. If the illegitimate user is trying to use the stolen smart card, they would need to login with the smart card first. Even though they enter the smart card and get into login phase’s Step 1 successfully, but they could not know User Ui’s password and could not precede the Biometric fingerprint Biou. Because it is highly impossible to extract the password from ei = fi ? h { h { UPWi, UPKi }, Xg } , due to the one-way hash function. Thus, it is concluded that the proposed scheme is more strength against stolen smart card attack. 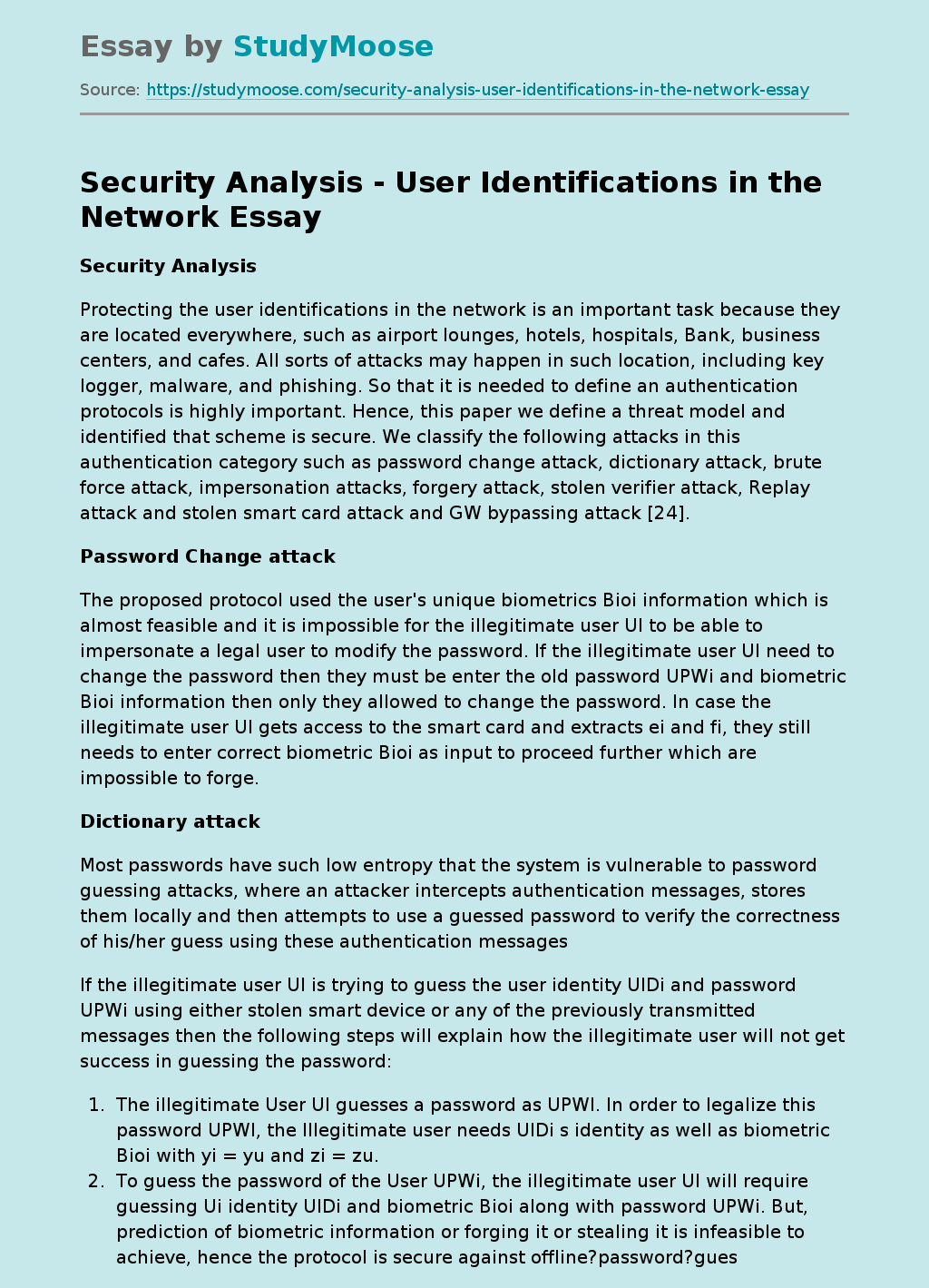