Sectional Tension Between North and South of USA

Sectional tension began when the North and the South had very different opinions on whether to have slaved states or free states. The North were against having enslaved people, and were a free nation. The South supported having enslaved people. The reasons that the nation split apart was due to the Missouri Comporomise, Fugitive Slave and the Kansas-Nebraska Act.

The Missouri Compromise had ll free states and 11 slaved states. The North and the South, having their differences grew into sectionalism. Missouri wanted to join as a slave state, but that would anger the Congress because they wanted an even balance on slaved and free states.

Don't use plagiarized sources. Get your custom essay on
“ Sectional Tension Between North and South of USA ”
Get custom paper
NEW! smart matching with writer

So Maine joined in as a free state to balance it out. The Senate wanted to settle the issue of slavery in the territories for good so there was a 36*30’N latitude line to seperate the free and slaved states for the North and the South.

In addition to the reason why the nation split is due to the Fugitive Slave Act.

This was a law part of the Compromise of 1850. This required people to help catch fugitives, anyone who aided fugitives could be fined or imprisoned. Slaveholders stepped up their efforts to catch runaways. Antislavery groups tried to rescue enslaved African Americans that were running away from being captured through the Underground Railroad.

Stephen A. Douglas proposed letting settlers in each territory to vote on whter to allow slavery calling it popular sovereignty. Border ruffians traveled across the border to vote in the election. The Kansas-Nebraska Act then became known as the “Bleeding Kansas” because the people there called it a “civil war” in the conflict between the citizens of the same country.

So these are the 3 reasons to why the nation split, and the reasons to the sectional tension between the North and the South. Some of the reasons were the Missouri Compromise, Fugitive Slave Act and the Kansas-Nebraska Act.

Sectional Tension Between North and South of USA. (2016, May 03). Retrieved from https://studymoose.com/sectional-tension-between-north-and-south-of-usa-essay 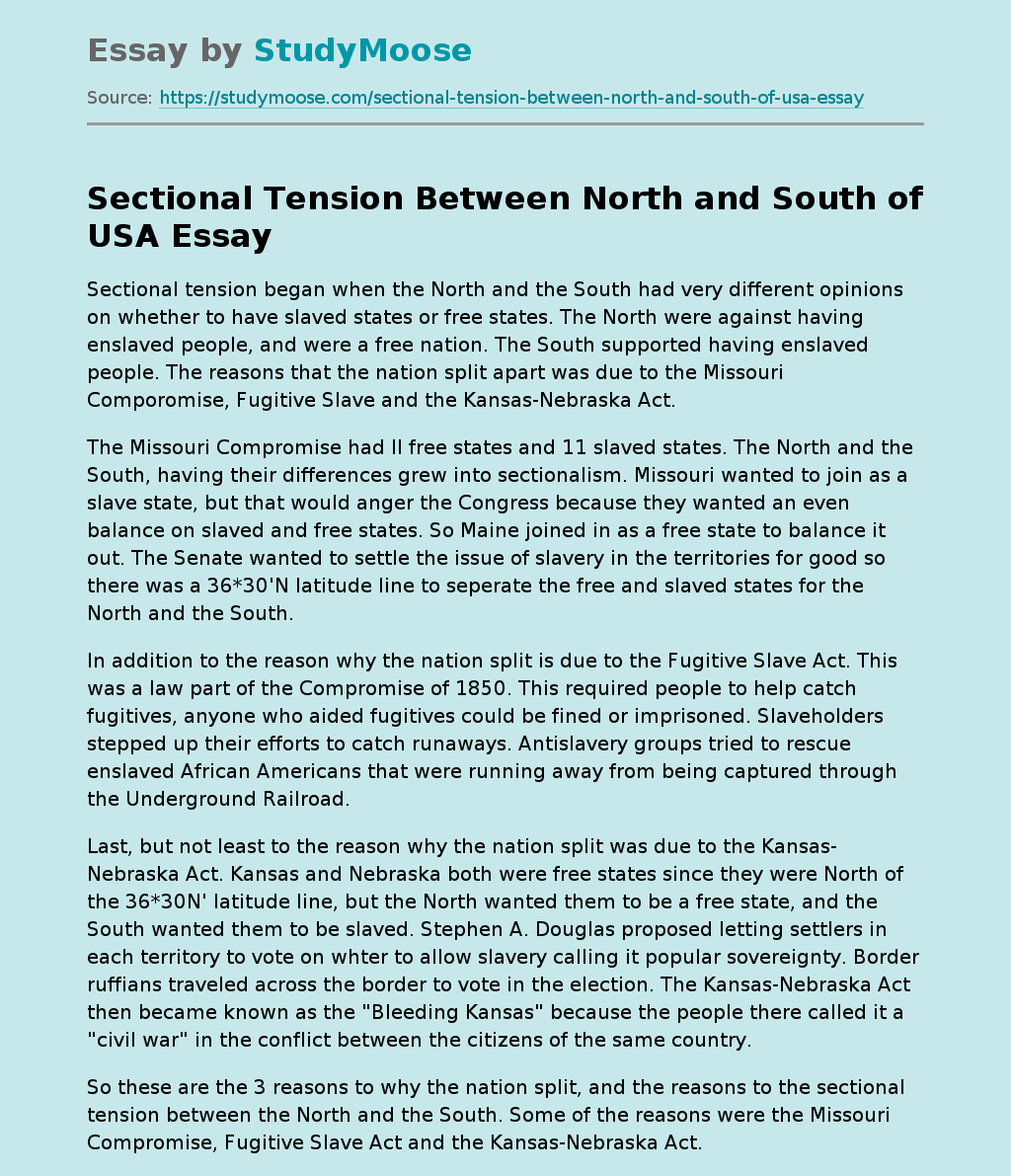