Don't use plagiarized sources. Get your custom essay on
“ Scope of applied linguistics ”
Get custom paper
NEW! smart matching with writer

It is important to mention that the definitions of Applied Linguistics have been closely related with its scope, and most of the initial definitions were closely related with an educational branch, particularly because its scope was the researched pedagogy of language teaching. During the 1950s, the focus was on structural and functional linguistics, which could be applied to language teaching and literacy in first and second language.

Years later, more and more focus where added, as language assessment, language policies and second language acquisition, all these, focused on learning rather than teaching.

So basically this means that applied linguistics has not been limited to language teaching only. In fact, according to Zoltan Dornyei (CUP 2009, 3) “it is a somewhat eclectic field that accommodates diverse theoretical approaches and its interdisciplinary scope includes linguistic, psychological and educational topics”. It is during the 1990s when Applied Linguistics finally assumes the incorporation of supporting disciplines, such as psychology, education, anthropology, sociology, political science, among other.

In other words ‘Linguistic applied’ is just the application of linguistic models, while Applied Linguistics studies the whole picture, including the analysis of many others disciplines like psychology, neuroscience, sociology, law, medicine, etc. and also models and theories. As these disciplines were included, the universe of language-related problems grew. So Guy Cook (2003:20) enlightened linguists pointing out that there is a systematic way to classify the kind of problems we are concerned with in order to solve them. In other words, we need to refer to specific instances to more general conceptual areas of study.

1. Language and Teaching Approaches & Methods Grammar Translation Method (GTM): Classes are conducted in the mother tongue. This method depends on memorization of lists of new vocabulary in isolation (i. e. no context provided). Great attention is paid to grammatical rules. The Series Method: Ls are exposed to a series of connected sentences (in FL) that are easy to understand. The Direct Method: It depends on the oral interaction using the FL inside the classroom. It is based on the belief that language should be learned the way we learned our mother tongue.

The Audio-lingual Method (ALM): It is based on the idea of over-learning and repetition. New Material is presented in a form of dialogues, broken into pieces. Cognitive Code Learning Method (CCL): It is a more student-oriented method as it focuses on his/her mentality and the complicated processes that take place as learning progresses. The Designer Methods: 1. Community Language Learning (CLL): It focuses on establishing inter personal relationships between Ls in order to make the classroom a family-like environment.

2. Suggestopedia: It is based on the idea that the human mind can learn anything if a suitable atmosphere (e. g. : music, visuals, imagination, meditation, relaxation … ) is provided 2. Language and Education/Learning 1st language education In this section, linguists try to answer the question: how infants learn/ acquire their mother tongue? Parents do not teach their children to speak. They correct their falsehoods when they misbehave rather than correcting their language mistakes. First-language acquisition is innate, meaning that we are born with a set of language rules which Chomsky refers to as the Universal Grammar.

These rules, Chomsky, who belongs to the Mentalists School, argues that these rules enable children to make new utterances of their own, i. e. they produce new language not only copy or repeat what they hear. Chomsky calls this idea Language Acquisition Device. Additional language education 2nd language education Second-language education is a young field that started systematically in 1950s and1960s. It is the study of how non primary language learning takes place. The SL can be used by the majority of the community, but it is not the mother tongue.

For example, 232 million Indians use English along with Hindi. Unlike the innate principles of first-education, the second-language education is based on cognitive mechanism. The 1st language is acquired, whereas the 2nd language is learned. Foreign language education FL differs from the SL in that FL is not a language of communication in the learner’s country. For example, Egyptians speak English as an FL not an SL. Clinical linguistics Crystal defines clinical linguistics as the application of the linguistic sciences to the study of language disability in all its forms (Crystal, 2001:673).

“Language Testing is the practice and study of evaluating the proficiency of an individual in using a particular language effectively. ” (Priscilla Allen, University of Washington) The purpose of a language test is to determine a person’s knowledge and/or ability in the language and to discriminate that person’s ability from that of others. (Alan Davies, University of Edinburgh) This branch is also called language assessment. This assessment may test listening reading, speaking and writing. The test pays attention to both knowledge, which is the theoretical understanding of a language and proficiency, which is the practical use of a language.

3. Language, Work , and Law Workplace communication It answers the questions what are the different techniques of communication in the workplace, what should be said in what situations at what time… etc. Language planning Language planning is bases on some principles. First of all, it is a multidimensional activity, that is to say, it should include all the communities and faculties that participate in the language planning process. Second, the idea that a nation has one language only is a myth. Third, the process of language planning should not be the responsibility of the education sector alone.

Fourth, in order that this process is to be successful, there should be continuous revision, evaluation and implementation. Forensic linguistics It is defined as the application of the theory of linguistics to the law including the language of legislation and the evaluation of written evidence. Some examples of this application may be the analysis of spoken statements (confessions), analysis of court room language (lawyers, judges, witnesses) voice identification, interpretation of the language of the law and legal writings and so on. 4. Language and Society This branch is also called sociolinguistics.

It studies the relationship between the society and language. It answers questions like how society affects the language, what are the varieties of a language, what the diglossic countries are, what is the relationship between language and gender, what are some examples of terms of taboo and euphemism and why they should be used, what are the social factors of language shift, why people resort to code switching, how languages die and how they are revived. 5. Language, Information, and Effect Language, Information and Effect Literary stylistics It studies the different styles of authors.

For example, one can feel the sarcastic style of the Egyptian writer Belal Fadl by only reading the title or one or two lines. We also have our own styles while speaking. The Egyptians use idiomatic expressions all the time while they speak. Nearly half of our speech is not literal. (CDA) Critical Discourse Analysis The terms Critical Linguistics (CL) and Critical Discourse Analysis (CDA) can be used interchangeably. CDA pays great attention to the context of the text (Wodak, 2000c; Benke, 2000).

CDA deals with `language as social practice’ (Fairclough and Wodak, 1997). It also considers the institutional, political, gender and media discourses.

As Krings argues, CDA is the practical linking of `social and political engagement’ with `a sociologically informed construction of society’ (Krings et al. , 1973: 808), while recognizing, in Fairclough’s words `that, in human matters, interconnections and chains of cause and effect may be distorted out of vision. Hence “critique” is essentially making visible the interconnectedness of things’ (Fairclough, 1985: 747; see also Connerton, 1976: 11±39 and see below). Translation and interpretation Translation sometimes is not as easy as it is believed. Specialized translators and interpreters have more complicated task.

Types of interpretations are consecutive interpretation (consec) and simultaneous interpretation (simul). Information design It studies how the message should be delivered, how the layout should be like, what font type, color and size should be used, in attempt to convey the information clearly and optimally useful. In other words, this branch deals with the typography or the shaping and design of the message. For example, Constantia is recommended for a PowerPoint slideshow.

Lexicography -This branch is divided into two sections: practical and theoretical. The practical section of lexicography involves compiling or editing dictionaries, whereas the theoretical section involves the analysis of the vocabulary itself paying attention to semantics and pragmatics and the relationship between the different forms. SOURCES: 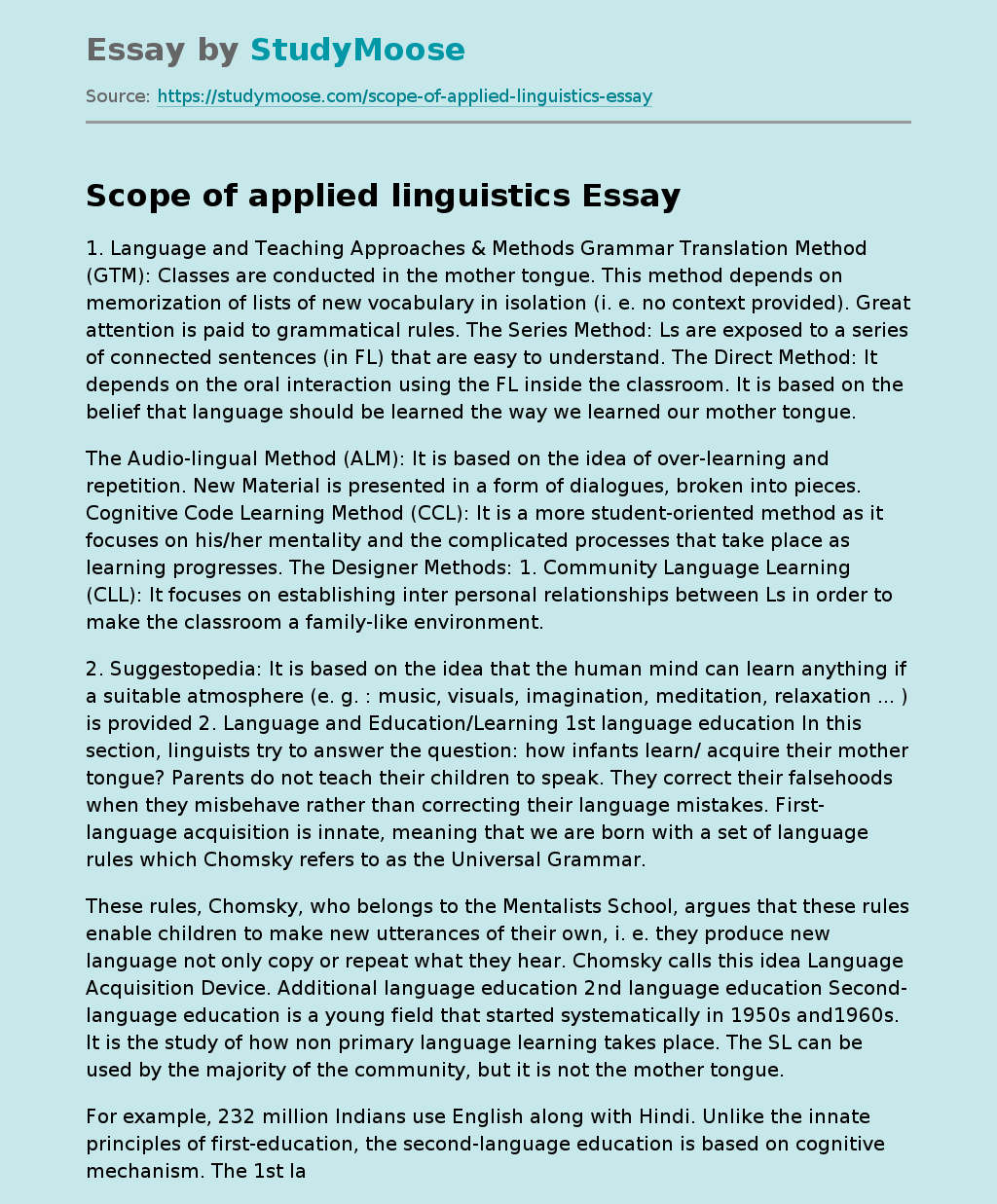