Part II: Design your own experiment using the scientific method. (40 points) Review each scenario below, and choose one to complete for your assignment. Each scenario contains specific questions that will ask you to provide examples, explain your suggestions for improvement, and refer to the lesson. Be sure to respond to each question in complete sentences. Part I: Scenarios (select only one)

Christopher and Kate noticed that after a rainstorm some of the rocks in their yard appear to shrink.

Don't use plagiarized sources. Get your custom essay on
“ Scientific Investigation ”
Get custom paper
NEW! smart matching with writer

They wondered how the mass of the rocks changed when dissolved in water. To determine this, Kate purchased a variety of rocks from a local shop, carefully recording the types of rocks in a data chart. Christopher gathered rocks from the backyard to add to the rocks Kate purchased. They measured each rock’s initial mass; then they inserted the rocks one by one into 100 milliliters of water and measured the mass of each rock after it had sat in the water for five minutes.

1. Describe why the investigation above is not adequate to explain what types of rocks will dissolve in water. 

2. Using what Christopher and Kate have already observed, suggest a possible hypothesis regarding how the mass of a rock changes when placed in water. Identify the independent and dependent variables.

3. Describe, in detail, a procedure to test your hypothesis. Identify the controlled variables.      

Lizzie loves to stargaze at night. She has noticed that the moon appears to change shape over the course of the month, and she wants to investigate why this happens. She hypothesizes that the relationship of the sun, Earth, and moon creates shadows on the moon. She sets up an experiment with a light bulb to represent the sun, a large beach ball to represent Earth, and a smaller foam ball to represent the moon. She researches the position of the sun, Earth, and moon at different times of a month and makes a model of the entire system.

1. Identify the parts of the scientific method in Lizzie’s experiment. 

2. List at least three variables Lizzie should control during the experiment. For each variable identified, give a specific suggestion for how Lizzie can control it.      

Matthew notices that if he walks barefoot on blacktop pavement, his feet get much hotter than if he walks barefoot on grass or dirt. He wants to determine if the amount of blacktop pavement in a city will affect the overall temperature of the city. His hypothesis states that because the pavement absorbs heat from the sun, a city with more pavement will have a higher temperature. Matthew uses a map to measure the number of miles of pavement within the limits of his hometown. He then records the temperature outside of his house to see how it varies each day for one week. He asks his friend in the next town to complete a similar experiment.

Once the data is collected, he concludes that the hypothesis is not supported.

Part II: Designing an Experiment (select only one)

For the second part of your assignment, you will apply the scientific method to a real-life situation. You will select a problem that leads to a testable question, similar to the scenarios presented in Part I and explain how you would follow each step of the scientific method to try and answer the question or solve the problem. Note: you are describing only what you would do at each step; you will not be conducting the experiment. Choose one of the following four problems to design your experiment.

Your family has planted a garden. You observe that some of the plants in the garden have teeth marks in them. What is eating the plants?

A local farmer notices that the level of water in the pond behind his house has been going down. Temperatures have been very high in the area, but there are also a lot of animals on his farm that may be drinking the water. What is causing the water to go down?

The crowds at the local beach have decreased over the last week. Temperatures are very high in the area, but people seem to be staying away from the beach. Why?

As you are walking down a wooded path, you notice a large depression in the ground that has burn marks along the outside. What caused the hole?

View this table to see what you will need to include in your experimental design.

Experimental Design Process
Parts of the Scientific Method
What You Need to Do
Example
Purpose
This step should include a description of the scenario you are investigating, along with the question that you are attempting to answer. It is important that each question/problem has a variety of possible solutions to investigate, thereby allowing you to use the scientific method. Scenario: My car won’t start. My question is: “Why won’t my car start?”

List all the possible observations that you can make about the question/problem stated in the purpose of the experiment. I noticed that the engine made a clanging sound when it started.

It has been more than two weeks since I last bought gasoline.

Explain what specific topics you would research to attempt to solve this problem, and describe at least two practical resources you would use for your research. I look through my car’s manual for reasons why the car might not start. I also call my friends to see if they have ever had this problem with their cars.

Describe an experiment to test your hypothesis. Be sure to identify the independent and dependent variables, as well as all the controlled variables. Make sure that the experiment’s procedure provides instructions for controlling the controlled variables and that it will test the hypothesis you are proposing. 1. Read the car manual to make sure I know where to connect the jumper cables. 2. Connect jumper cables from my friend’s car to my car, making sure not to change anything else in the process (i.e., do not move any wires or belts; do not change the amount of gasoline or oil). Follow all safety directions as we attempt to jump my car’s battery each day for two days.

Controlled variables: gasoline, oil, wire connections, and other components of the engine

Describe the data that you will collect to test your hypothesis. How will you organize your data to make sure that it is neat, verifiable, and easy to understand?

Date:
Results:
May 30
Car did not start; no sounds in engine; no lights.
May 31
Car still did not start, but lights came on.

Describe possible results you would be looking for or measurements you would be taking, based on the experiment you designed. The car didn’t start even after we tried to charge the battery with the jumper cables. 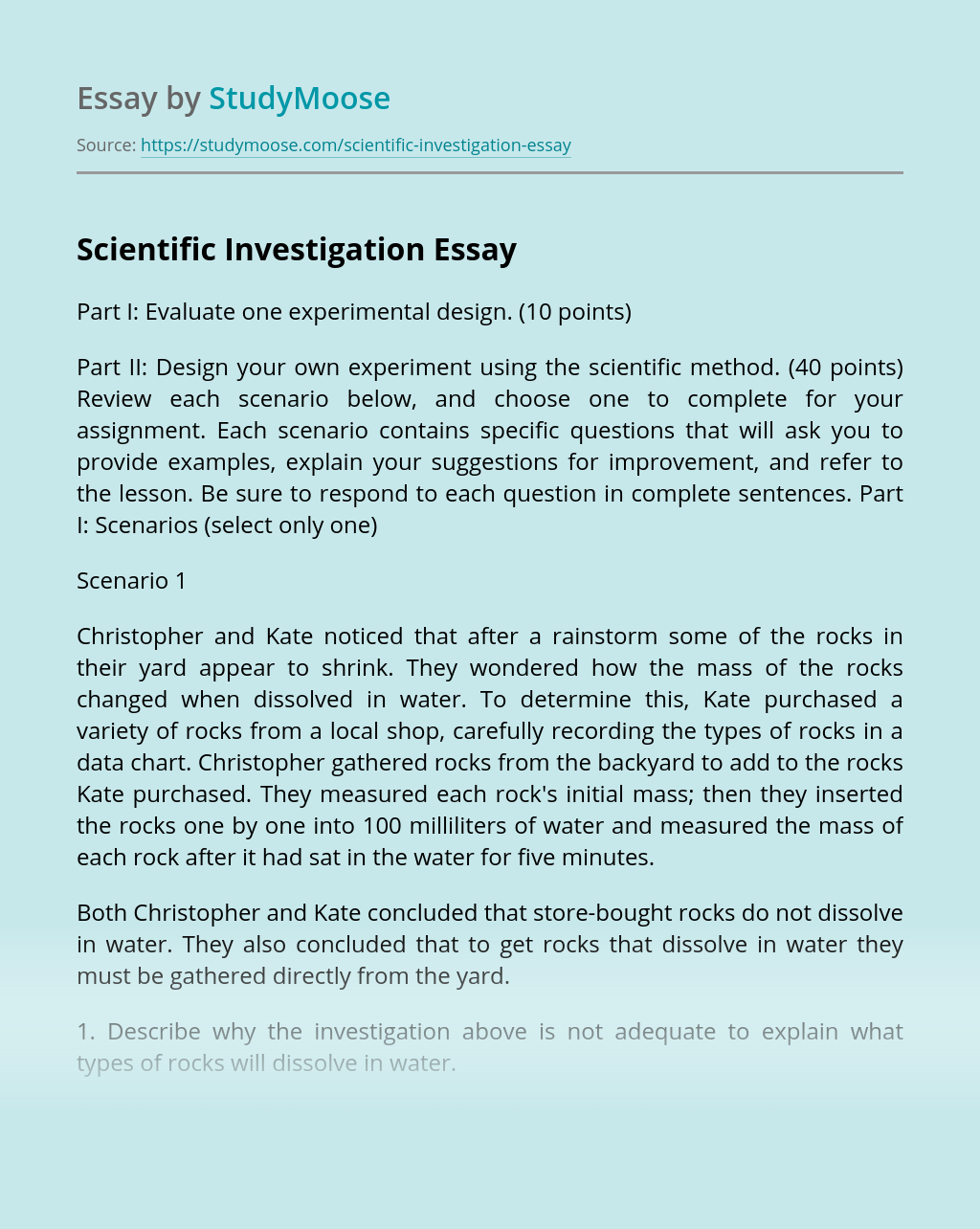