Scientific Impact on Art and Literature

When it comes to technology, there is always much to talk about. As is known to all, the development of technology relies on a combination of various elements, including economy, political situation, conventional values and so forth. However, science and technology, in turn, also play a significant role in the art and literature of different countries. Ancient China and the western are two typical cases.

Firstly, technology affects a lot on artworks. Early in human civilization, owing to the imperfection of social system and knowledge structure, it is not easy for people, even for scientists or artists, to have systematical thinking patterns.

Don't use plagiarized sources. Get your custom essay on
“ Scientific Impact on Art and Literature ”
Get custom paper
NEW! smart matching with writer

Thus, people think in a simple mode, leading to naïve cognition of many aspects of the real world. One of results is rendered as a simple use of tools. People create primitive tools for living and some simple artworks. With the improvement of stone implements’ techniques, original artworks developed to some extents. For instance, a part of Paleolithic paintings in the Caves of Lascaux are found to be created by using sharp tools and three main colors, which are results of early technology.

Only three colors are used in Paleolithic representation: red (hematite), black (charcoal, soot, bone charcoal or manganese oxide) and yellow (goethite) (Chalmin,2003). Now that chemical components are diverse, Paleolithic artists use different tools to produce works of art. According to the first study in rock art from Leroi-Gourhan’s study in

Charcoal was used mainly to draw and manganese oxide was used to paint since the powder is black. Also, the transformation of yellow goethite into red hematite under heat treatment was known by prehistoric people(Pomies,1999). The component of pigment is related to the measures people take such as charcoal applied on the wall. Similarly, frescos in Paleolithic China are in their embryonic period. On the rock of Yinshan Mountains of Inner Mongolia, Li Daoyuan, a geologist of the North Wei Dynasty found simple designs, being considered as one of the earliest cliff paintings by later archeologists. （No author, 2013）. Identified by a survey of scholars and experts from China, themes of these paintings are generally about nomadic life and hunting activities. Most of the paintings are believed to be chiseled with stones to dig designs on the rocks. The chiseling was done often unevenly in-depth and density due to immature technology. Therefore, Paleolithic technologies in China and the western both have an effect on original artworks.

Moreover, science theories give related materials to art and literary works. The 24 Solar Terms, generated during Pre-Qin period, is a classic science theory for ancient Chinese. The 24 Solar Terms covers the astronomical event and some natural phenomena. Each term is named according to the name of seasonal change of climate. Inspiration comes from real world. Many literary works in ancient China are based on scientific achievements. In Classic of Poetry, one of the poems describes husbandry work under the guidance of the 24 solar terms. Similarly, Tai Chi Graph created by Wu Zuoren who is a Chinese painter was inspired from Electric Charge. Tai Chi Graph is about Yin and Yang, has similarities to positive and negative particles, so this is where the inspiration lies. The Golden Section presents the rhythm of hammers in a mathematical way by Pythagoras who is a Greek scholar. Many discoveries and achievements should be attributed to The Golden Section. This theory was widely applied in paintings, architecture and mathematics. The Golden Section has strict proportionality and artistry. Thus, it’s an ideal theory applied to art field. Obviously, science gives material and insights to art and literary works.

Nevertheless, measures to use science and technology in China and the western are quite different. China was a world leader in science and technology before Qing Dynasty, where people innovated papermaking, printing, compass, and gunpowder. Although China took the lead at that time, it was defeated by Western nations. Chinese ancient scientists paid more attention on the observation of nature. Also, they didn’t form a completely scholarly system with criticisms. There was a trend on literature, art, and public administration while science and technology were restricted to practical applications instead of constituting a comprehensive system. Affected by lack of a rational thinking system, Chinese authors created more lyric works. By contrast, Europe is the home of some of the most prominent researches in various scientific disciplines, mathematics, chemistry, and engineering. Unlike China, scholars in Europe thought more systematically at that time. Aristotle’s writings cover zoology, logic, mathematics, biology, and so forth, and establish the first comprehensive system of Western Philosophy. Archimedes, a leading scientist in classical antiquity, applied concepts of infinitesimals and measures of exhaustion to derive and prove geometrical theorems (Robertson, 2007). Rigorous thinking in science and technology affects art and literature. Reflection of logic from science and technology is obvious. In Homer’s Epic, the author said that the gods shouldn’t be worshiped by average people since the gods are just extraordinary people. The gods shaped by Homer don’t compromise to destiny and never shy away from tribulations. Clearly, those gods reflect people’s characteristics in real life. That is, some literary works in ancient Greek cover realism which is distinguished from idealism.

To sum up, science and technology undoubtedly give contribute to art and literature. No matter what techniques, scientific theories or thinking patterns humans use in ancient time, they all provoke thoughts on art and literature. Chinese and western scholars both draw inspiration from science and technology, whereas they think differently. As a result, Chinese and western literatures have similarities and meanwhile, differences are distinct.

Scientific Impact on Art and Literature. (2021, Mar 05). Retrieved from https://studymoose.com/scientific-impact-on-art-and-literature-essay 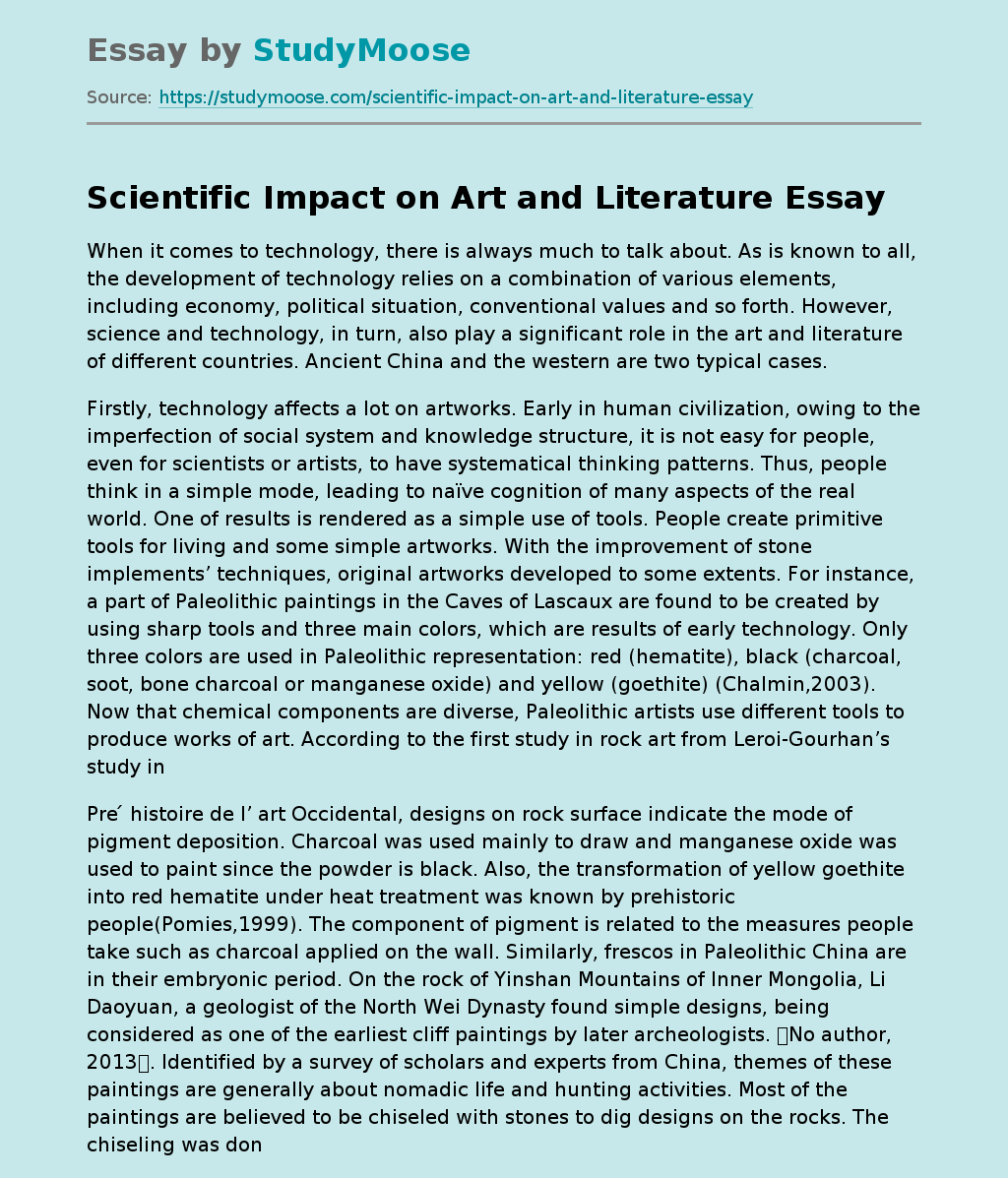