Does science make us narrow-minded?

I believe that science opens our views; however at the same time I believe that science can make us narrow-minded. Knowledge and science according to me includes logic, critical thinking and being able to support your own beliefs. And that is more open-minded than narrow-minded if you ask me. However there are narrow-minded scientists who claim that they are right and refuse to listen to other opinions or views, just like one of the lines in an old Simon and Garfunkle song; “A man hears what he wants to hear and disregards the rest”.

Don't use plagiarized sources. Get your custom essay on
“ Does science make us narrow-minded? ”
Get custom paper
NEW! smart matching with writer

And that is really narrow-minded. Actually I think not just some scientist are narrow-minded, I believe we all sometimes choose what to hear, and what to disregard. Perhaps we do not ignore the rest as in the song line, but some we do ignore. We should have different points of view and then be able to make our mind up, that is what makes us open-minded. Just having one view is narrow-minded.

I believe that people like Charles Darwin, Albert Einstein, Marie Curie, Benjamin Franklin, and Isaac Newton to mention some are scientists who have developed theories needed in this world, and made me believe that science is something excellent that opens our views and develop the world. But I think we also should be open for new explanations and believe that the theories we believe in today could be replaced if further studies disprove them. Ever since we were born we have been told what to do, and how to do it.

We have been told what is right, and what is wrong. Have you not heard someone telling you that you are wrong? Perhaps with a specific theory or law of science as explanation why you are wrong and why your belief is theoretically impossible? I believe that make us narrow-minded. Because you do not want to hear that your hypothesis which you have made up out of reason is wrong because a scientist perhaps hundred years ago said so. I believe that you have to let people use their knowledge and their reason to make up their own hypothesis or opinion.

Maybe it is proven wrong, but perhaps not. And if your belief, opinion or hypothesis is proven wrong, so what? Let people learn from their mistakes. But to go back in time the phenomenon that the world is flat was a theory that later has been proven wrong. So why cannot today’s science be proven wrong by new scientists and their studies? Back in history church and religion told us what to believe. Today sciences do, but as I said does knowledge and science include critical thinking which let us make our own opinion, and open our minds.

There are often two different explanations or points of views, the scientific and the religious, and to be able to make our mind up we should listen to both, that is what makes us open-minded. Just having one view is quite narrow-minded. Open minds are the best kind, but this is only achieved with understanding of science and religion and a respect for both. Because even if you do not believe in something, you have to know how to respect that others might do.

Does science make us narrow-minded?. (2020, Jun 02). Retrieved from https://studymoose.com/science-make-us-narrow-minded-8608-new-essay 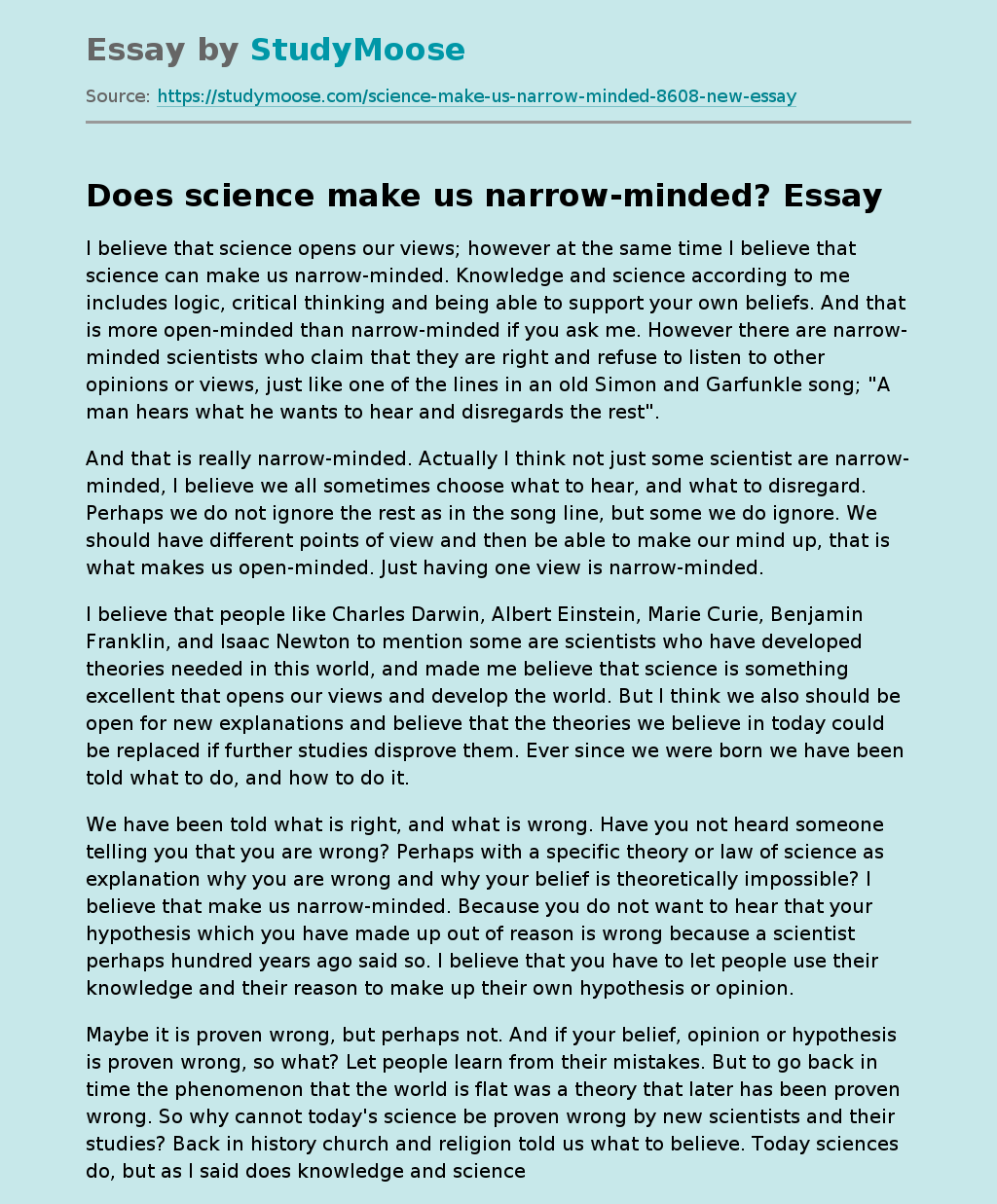