Science is a boon or bane

As we know that every coin has two faces, same with science. Good morning to everyone today I Anoohya is here to tell you about the given topic science is a boon or bane. Science” every person has his own thought about it some say it is good while the others say it is bad nothing is good or bad but it depends on the man how he uses it. Can you imagine the world without electricity? Of course not. Inventions are made with the thought of improving men’s life not with the thought of destroying the peace of the man.

Don't use plagiarized sources.
Get Your Custom Essay on Science is a boon or bane Just from $13,9/Page

Science in its is nothing, created by humans, and is used by humans only in any way they want. So, why to criticize science if there is any wrong effect of it? Science not only bane but a boon to whom it is properly used.

For scientist like Edison and Einstein it is a boon. Now-a-days due to wrong usage of science& technology by some youngsters makes parents to think that it is a bane.

They think improvement in social and technological development makes their wards to move in wrong path who doesn’t understand even without science their wards may move in the same path. Improvement of science results in development of technology which we need for a sophisticated life. This only helps in this super fast century to make our work easier within the short span of time. Sir Alfred Nobel experimented with dynamite to clear huge mountains to turn it into productive land. But modern man is using it to kill his fellow human beings and destroy nature.

The destructive potential of atomic energy was witnessed in August 1945, when the United States dropped atom booms on the Japanese cities of Hiroshima and Nagasaki. Those who survived the nuclear bombing suffered from its aftermath. It is a horrible fact that much of the national income of even a developing country is spent on acquiring latest weapons, bombs and missiles.

Guns, revolvers, tanks and fighter planes, explosives, nuclear bombs etc. Were invented to develop a strong security system to protect the innocent masses, but their misuse is now crushing humanity. Apart from atomic weapons, man has also started stockpiling biological and chemical weapons. These weapons are also extremely dangerous. So, in my view science is always a boon for right people who utilize it properly. Every coin have two sides as science also have two sides based on the person who use it Thank You

Science is a boon or bane. (2016, May 12). Retrieved from https://studymoose.com/science-is-a-boon-or-bane-essay 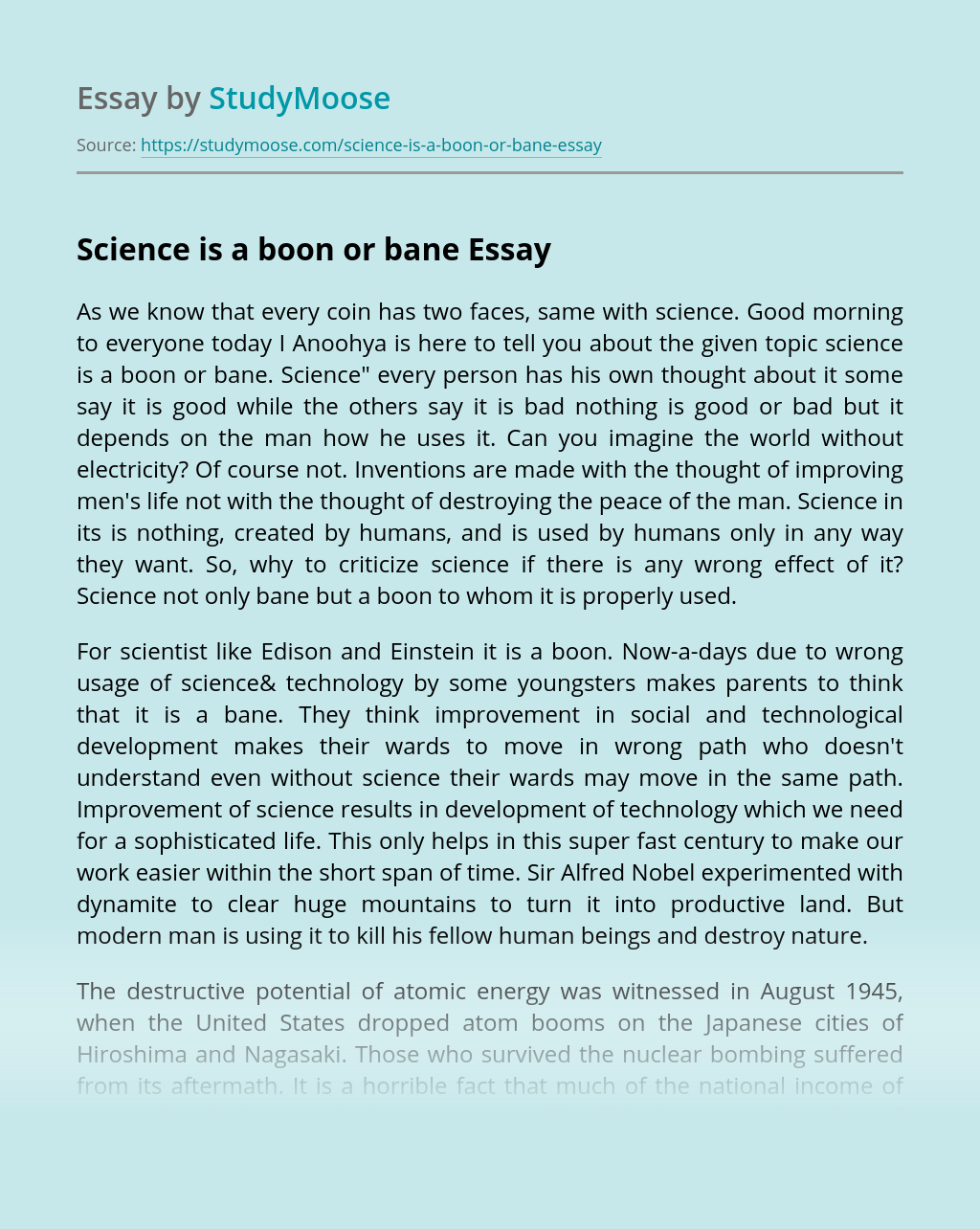 Born in a prominent Bengali family, Subhas had dedicated much of his younger years by being actively involved in freedom movements in India, for ridding India of the British Imperialist rule. For this purpose he joined hands with stalwarts such as Nehru and Gandhiji; he expressed his frustration, especially with Gandhijis’ slow and painstaking way...

Duck and Cover The society we live in today is so different than that of World War II. In that era the biggest threat of destroying society was the atomic bomb. In these times of today we face so many different threats of terrorism from other countries and from within our own cities. Even more...

View sample
Get Essay
What did Machiavelli mean by the statement “the end justifies the means”?

What did Machiavelli mean by the statement “the end justifies the means”? Analyze why it is still relevant to leadership today. Support with examples. Niccolo Machiavelli watched as French, Spanish, and German armies wreaked havoc on Italy in 1469-1527. He became convinced that political unity and independence were ends that justified any means. Machiavelli meant...

There are primary and secondary documents which support both sides of this very controversial issue. Throughout doing this research I have found it incredibly hard to take a one-sided approach to this essay and therefore have decided to remain neutral. I will present my conclusions of both perspectives on the bombing of Hiroshima and Nagasaki....

View sample
Science is a boon or bane

As we know that every coin has two faces, same with science. Good morning to everyone today I Anoohya is here to tell you about the given topic science is a boon or bane. Science” every person has his own thought about it some say it is good while the others say it is bad...