The science fiction film genre is absolutely the hardest to define. It can easily be confused with or applied to Fantasy films and some horror films as well. Genres are used to identify types of films, and outside of science fiction this is a fairly simple process. A Western is set in the west and has cowboys and Indians. A gangster film has a plot revolving around the mafia. A horror film is centrally purposed to scare the viewer. Science fiction, on the other hand, is not easy to nail down what it is.

However, as often as not the “science” in a Hollywood sci-fi movie can be considered pseudo-science, relying primarily on atmosphere and quasi-scientific artistic fancy than facts and conventional scientific theory. The definition can also vary depending on the viewpoint of the observer. What may seem a science fiction film to one viewer can be considered fantasy to another”. This is the definition proided by an academic website called WordIQ. This definition is very interesting. It is sometimes ambiguous as to whether the definition is written for literature or film, but this is obviously written for our purpose, the film genre.

See more: how to write an analysis of a research paper

This definition acknowledges that even though the genre is science fiction, the science is very often the fiction. I’ve seen countless sci-fi films that were premised on a new technology or futuristic technology that many times defies current laws of physics or simply put, is impossible. That is what makes sci-fi so appealing as well though. It is nive to watch a good drama or “based on a true story” film, but science fiction will take the mind to places that it never considered before, and that is because they do not exist!

I believe that this is what the definition is alluding to when it says that what is science fiction to one viewer may be fantasy to another. To me, there is a distinction between the capabilities of a human or the unknown being accepted by the viewer as artistically possible, and your “Lord of the Rings” fantasy genre that includes entirely alternate worlds that are not exaggerated, but impossible to imagine existing. Sci-fi films, even though they may contain alternate worlds or beings can be imagined to exist if the viewer is willing to give the director the artistic license to bring science fiction to the screen.

The second definition that interested me is from Rod Serling, and also discusses the closeness and the difference of fantasy and science fiction. Rod Serling says “Fantasy is the impossible made probable. Science Fiction is the improbable made possible. ” This touches on the fact that science fiction deals with improbabilities rather than impossibilities. I believe this to mean that a science fiction film may present a completely fictional event or area, but while it is highly improbable, the well-done sci-fi film makes it seem possible.

Fantasy, on the other hand, deals with a set of plotlines that are far more hard to believe, and they understand that, but unlike science fiction, the goal of fantasy is to take the impossible and just make it probable, not actually possible like science fiction. I personally prefer science fiction for this very reason. I want to be convinced that what I am watching has a chance at being possible, and that is what makes it so interesting. Fantasy has its uses, but at the end of the day, it can only see probable at best, and never possible, like science fiction can.

The third definition I chose to address comes from the American heritage dictionary and says that science fiction is “a cinematic genre in which fantasy, typically based on speculative scientific discoveries or developments, environmental changes, space travel, or life on other planets, forms part of the plot or background”. This definition sees to fall in line with the last due to its use of the word “speculative”. This means that what this genre puts to us in its plot should not be written off as impossible or ridiculous, but is possible.

This shows that we watch it to get a feeling of making the unknown known and the unproven proved. We watch to see things that we may not see in our lifetime because they are so improbable, but they are possible, and therefore provides for interesting and engaging films within the genre. The genre may discuss known or unknown worlds that could include everything from distant alien worlds to other dimensions, but just because they are unknown to us does not mean they do not exist.

Something I’ve neglected to mention thus far is that the genre relies on plausibility as well due to how much imagination is required. If you see black and white and cannot wrap your head around the ideas or plotlines presented in a science fiction film, it does not mean that the film is not good, it means the viewer is not capable of grasping the artistic and plausible elements presented for entertainment. The fourth and final definition that I will present is the longest, but I will wade through the pros and cons of this definition.

It is as follows: “Science fiction film is a film genre that uses science fiction: speculative, science-based depictions of phenomena that are not necessarily accepted by mainstream science, such as extraterrestrial life forms, alien worlds, extrasensory perception, and time travel, often along with futuristic elements such as spacecraft, robots, cyborgs, interstellar space travel or other technologies. Science fiction films have often been used to focus on political or social issues, and to explore philosophical issues like the human condition.

In many cases, tropes derived from written science fiction may be used by filmmakers ignorant of or at best indifferent to the standards of scientific plausibility and plot logic to which written science fiction is traditionally held”. This definition starts very well explaining what goes into the making of a science fiction film, and what elements are used to creatively present scientific scenarios that are plausible, even though they are not accepted by mainstream scientists, but that is the point.

If it was science non-fiction, then that would be a problem. But it is science fiction, and the key word is not science, but fiction. It relies on its ability to tackle the seemingly impossible and make ot possible, even if the audience knows it is not something they will learn in an upper level biology course, Viewers do not watch films like these for an education, the y watch to be drawn into imaginative and creative worlds that do not exist as far as they know, but they are willing to buy in for the duration of the movie.

When Rod Serling says that Fantasy is the impossible made probable and that Science Fiction is the improbable made possible, I agree with him. This is the easiest way to differentiate between the two genres and allows one to accept going into their viewing experience that even though they may buy into the movie and believe it to be possible by the end of the film, that that is okay and is actually to be desired. 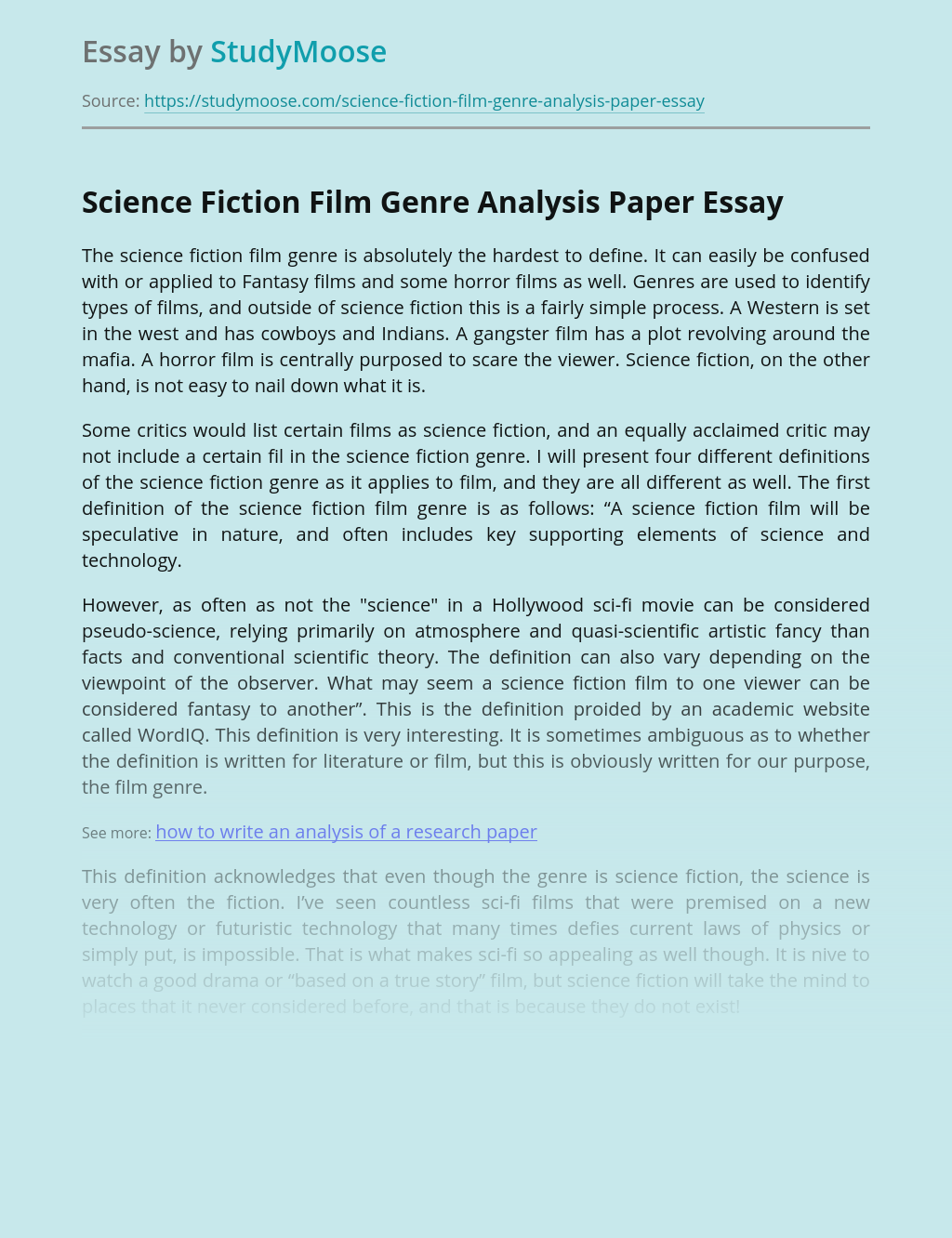 Owen Marshall’s short story ‘Mr Van Gogh’ is an explanation of society’s harsh attitudes towards individuals today. Through characterization, religious allusion and imagery Owen Marshall portrays Mr Van Gogh as someone who is overcoming society’s acts of judgement. This is reflected on the audience because Marshall makes us question our own behavior in the hope... VIEW ESSAY

The famous horror writer ‘Edgar Allen Poe’ first introduced detective Fiction in 1841 with ‘murder in the rue morgue’. Although Mr Poe was the creator of detective Fiction, he was not the one to make it as popular as it is today. Readers were more intrigued by Poe’s creative genre ‘Horror’. Poe’s ‘murder in the... VIEW ESSAY

When preparing a movie production a great deal of things require consideration, for instance money is a crucial component that will be needed to money the production of the film, with the crew/cast requiring payment for their work. Props need buying and depending upon the discussion of the motion picture they might be quite costly... VIEW ESSAY

View sample
What is the importance of Simon in Lord of the Flies?

Write about * the importance of the part Simon plays in the plot * how Simon is different from the other boys * what Simon might represent * the ways the writer user Simon to convey his ideas Simon appears only in very few occasions, when compared with other main characters such as Ralph, Piggy... VIEW ESSAY