Public school settings are not always the professional learning environments that we hope for our children. There are many factors that create a school’s culture, one of them is the way that the students dress. Some schools try to control dress with dress codes, other schools opt for school uniforms. While school uniform policies have their critics, the positive effects of school uniforms overshadow the criticisms.

As stated by Holloman, LaPoint, Alleyne, Palmer & Sanders-Phillips (1996) ‘Many school stakeholders—students, teachers, staff, families, community members, and elected officials— believe that uniforms… curb negative behaviors associated with student dress such as teasing, absenteeism, tardiness, gang-related activity, and school violence” (as cited by Mitch & Knechtle, 2003) and these beliefs are backed up by the fact that a large California school district reported to have made, “a remarkable decrease in….

Don't use plagiarized sources. Get your custom essay on
“ School Uniforms in Public School ”
Get custom paper
NEW! smart matching with writer

sex offenses, weapon offenses, assaults and battery offenses” (West, Tidwell, Bomba & Elmore 1999) after having implemented a school uniform policy. Mixing words such as “murder” and “assault” with the thought of children’s safety is terrifying, but there are still other equally terrifying problems in schools that uniforms may alleviate.

Another student safety area that should be considered is of outside violence coming in to our children’s schools. Cohn (1996) asserts “Arguments for school uniforms include such claims as school uniforms promote student safety by making it easier to identify people who do not belong on school grounds” (as cited by West, Tidwell, Bomba & Elmore, 1999). Given the increased frequency of school shootings in recent years, it is of the utmost importance to be able to easily distinguish between those who do and do not belong in the school.

That means that students, teachers, security guards and administrators as well as visiting parents should be able to identify peculiar persons within schools, which could be more easily achieved if all those who belonged in the schools were in uniform.

It is impossible to remove all negative aspects from our children’s public school environment and school culture, but if changing clothing requirements can help to make our children safer while in school, imagine the impact such a change can make in other areas that are equally important. Clothing affects culture, and school culture affects academics. Who does not want their child to be successful in life? Teaching children from a young age how to dress professionally is a step in setting them up to be the successful child that will grow into the successful adult, after all our children are future leaders. Do children who start out going to a school with a uniform policy always understand the importance of dressing professionally? They may not, but if they do not know anything else except for wearing a uniform, chances are the children will not fight a public-school uniform policy, and they may take more pride in their appearance. One study done by West, Tidwell, Bomba, and Elmore (1999) with parents of children in the fourth-grade shows that forty-six percent of parents surveyed believed that uniforms create a climate conducive to learning and forty-nine percent believed that uniforms promote a spirit of school pride. It is also interesting that seventy-four percent of participants believed that uniforms eliminate visible differences in family socio-economic background. By eliminating socio-economic competition, kids are less likely to compete with each other over inconsequential things, and we may anticipate that they will instead work harder to compete academically. By removing the stress of worrying about what they are going to wear, and having a precise set of rules and expectations 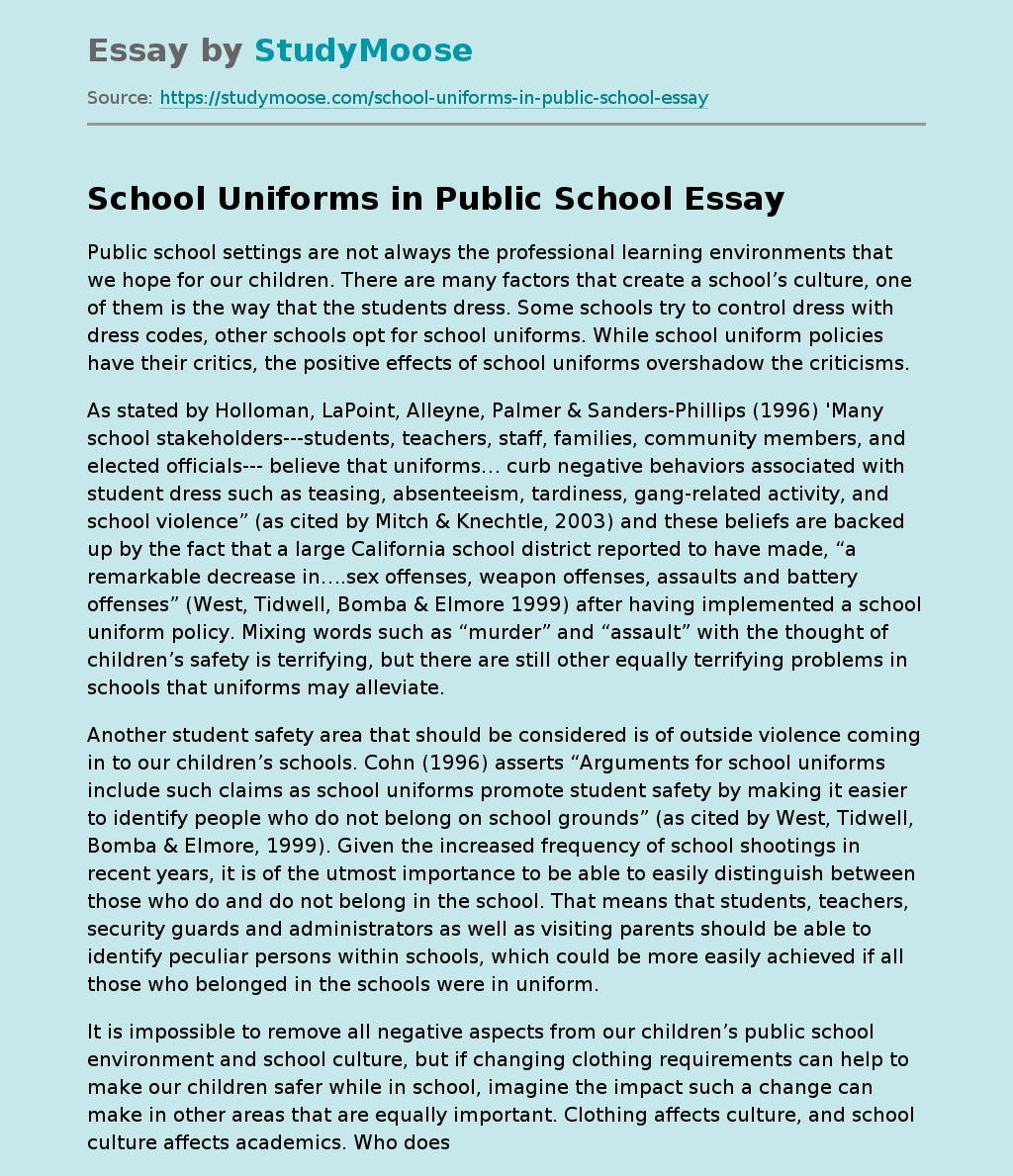