Abstract School’s safety and security have been taken into consideration. After the past few historical events, that have changed the way that citizens look at school’s security and safety has changed dramatically. School districts and the government are taking action in fixing this problem that is continuing to become worse. Their goals are to make these schools a safe environment for students and staff to attend to. The ideas and bills that have been made and are taking place are going to affect the schools and the way that they will run.

School security and safety will one day not be an issues in society.

School Security and Safety Children have grown up thinking that school is a safe place to be. Through recent historical events, children’s safety and school’s security is something to be questioned. Are children really safe at school anymore? Since a couple of the last school shootings, school districts and the government have been making changes to the way that they are running their schools now.

The schools have come up with emergency plans, making of a bill, hiring more officers to be on the school campus, and doing whatever is possible to make their school safer than they thought it already was.

In some schools, they are wanting to push “intruder” drills, so in case an incident were to occur, the school would be prepared. School security and safety should be improved so in the future there won’t be a new historical event in the news.

School incidents have been happening for over decades. The most recent ones are the ones that many will remember and be effected by forever. Many are familiar with the school shooting at Sandy Hook Elementary School. Adam Lanza, a twenty year old man, entered Sandy Hook Elementary one morning and shot twenty young children and 6 staff employees, and then committed suicide.

It was a traumatic day for many. Since this event, the United Stated has taken action into making our schools safer for the children that attend any school. Many bills and plans are being presented and passed in order to make these schools safe. In taking action, schools have started to hire police officers or hire more than what they have now. They feel that having police officers on campus makes the students and staff feel safer. Another action that schools are taking is having fences put around the school, and also installing more security. Incidents like these don’t only happen to elementary, middle, and high schools.

These events can also happen on college campuses. One of the major events that took place was the Virginia Tech Massacre, where 33 students died. It occurred in different events during the day. The students were not notified or evacuated from the campus until later that day. The urging to have school “intruder” drills, is a great idea. In the article “How First-Graders Prepare For Armed Gunmen Trying To Get In Their Classrooms”, it tells how a school in the Bay area do an “intruder” drill every 14th of the month, in memory of the Sandy Hook Elementary School shooting.

They teach the children what to do if they hear the code word for intruder in the school. For this drill, the school has volunteer parents and police officers come on campus and pretend to be the intruders for their drill. During the drill, the principal picks out a student that may be chattering or making some other noise and explains to them that if they were to be doing this during a real intruder incident, it could possibly bring the intruder into their room first and cause harm to everyone else.

The principal does not mean to scare the child or make them upset, but he is just trying to show the children what the slightest noise could do. Having this idea as a possibility, for having a safer school, is very smart. It gets the children into a routine of experiencing something like that, so if it were to really happen, there wouldn’t be any problems or complications from trying to protect the children from danger. From the past shootings in the school, the government and school districts have pushed having an emergency plan in hand to where if something were to happen, they school knows what to do.

It has a total of 188 relevant bills. From the few listed bills that were provided, the only one that hadn’t died and was resolve was the School Climate and Student Supports. It has been introduced and passed from the Senate to the House. It is still in action of being passed fully. This bill is to emphasize the importance of having school counseling available in the school. It states that programs from the American School Counseling Association should be included in education every day. The U. S. Senate is considering making a School Safety Bill.

This bill will benefit any school because it allows the school distracts to use the grants that are provided to improve their schools safety and security. The U. S. Senate has come up with many ways of using the money for the schools. The bill good for the states and local governments because it is a way of upgrading security from anywhere between having fences to installing surveillance equipment. This is extremely good because these are ways of making a safer school and environment for everyone. Another advantage that the money can go towards is having teacher and administrators trained on security.

This bill is going to authorize $40 million for the grants. The local governments will have to be responsible for fifty percent match for the federal resources. This idea is not something that is brand new and recent. All of this is based off of the first program that was created by the Congress in 1968. It was made on part of the Omnibus Crime Control and Safe Streets Act. This bill not just be going towards the K-12 schools; it will also be available for universities to create a safe environment for them as well. It created a National Center for Campus Public Safety.

This will provide the research and training to help keep universities safe as well. In “White House Issues New School Safety Guidelines”, it discusses Obama’s guidelines for school districts. It is 75 pages long that is full of information that is to help school emergency planners create new plans or to update and improve their plans. It is to help show how to respond if an incident were to happen in their school. Obama is working on trying to pass a second part of this plan, so schools are able to make the changes in their emergency plans.

He wants to do this by proving a $30 million grant to states to help improve their districts with the making of their new emergency plan. He also asked Congress if he could have the state and school district accept a school safety funding from the Education Department, so they can have their school’s plans up to date. From the past events that have changed many people’s lives, these actions should be taken. Through all the actions that were stated, they should all be taken in consideration for making these schools have a better environment for the children and staff members to attend.

Children should be able to go back to school without worrying is something bad is going ot happen at school that day. Children should feel that school is one of the safest places for them to be at. In these actions, I think that is has a nice start. Over time, hopefully schools will improve and have the feeling of being safe again. I think that there are more ways that school safety can be improved, but it is being taken care of, one step at a time. School safety and security will one day be taken care of and not have to be an issue to worry about daily. 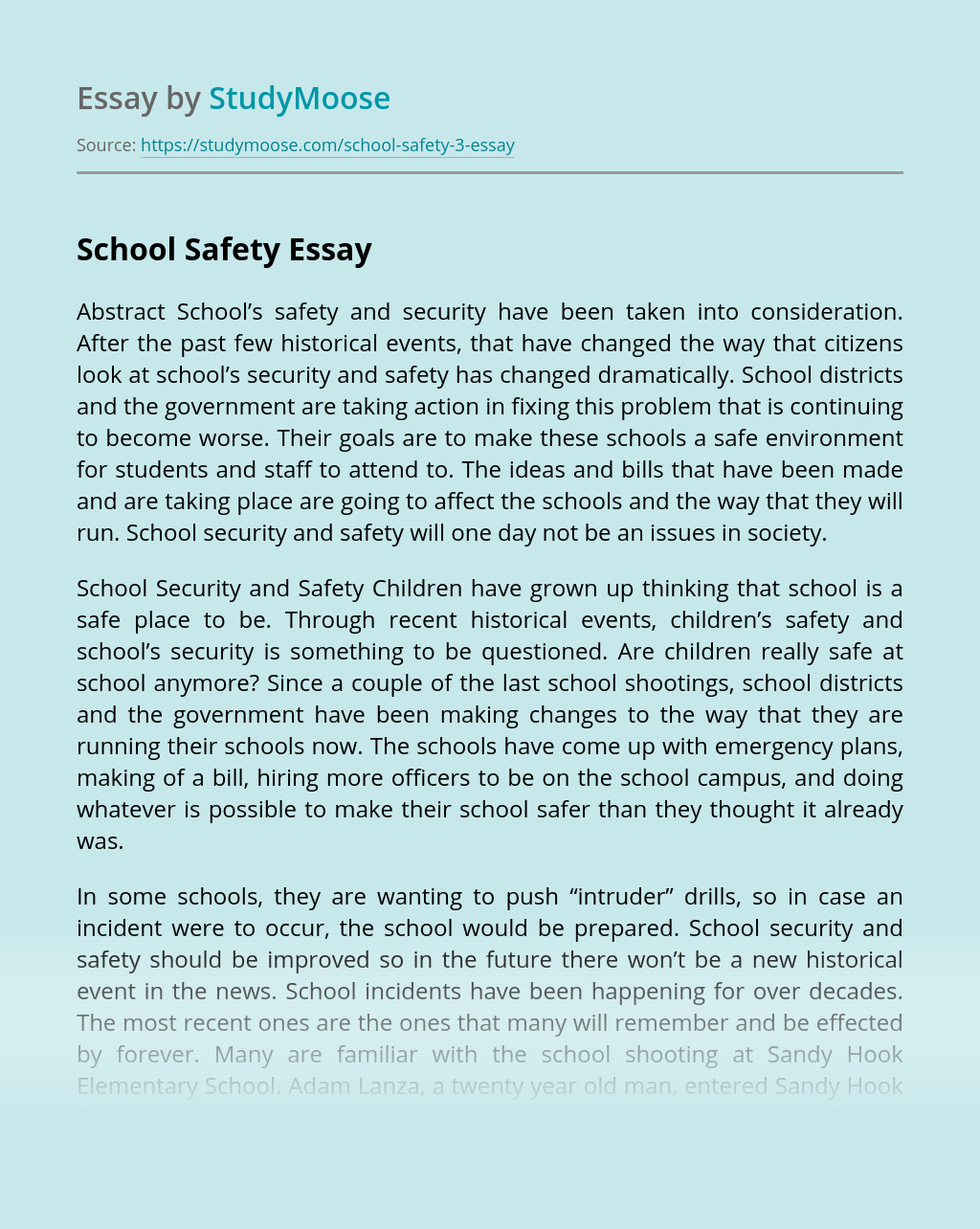