Scenes in Plays Cyrano vs Romeo and Juliet

Shakespeare and Rostand employ unique writing methods in order to show the battle the characters in each of their plays, Romeo and Juliet and Cyrano de Bergerac partake in to express their true feelings for one another. Each play utilizes the motifs and themes of light versus dark and societal views that work against or shows the true meaning behind their love for one another through a balcony setting which resembles each other well. Settings are important components in any piece of literature, they set the mood and atmosphere for the particular scene.

Don't use plagiarized sources. Get your custom essay on
“ Scenes in Plays Cyrano vs Romeo and Juliet ”
Get custom paper
NEW! smart matching with writer

In both plays the balcony scenes occur at night under the cover of darkness, which plays an important similarity in the plays as well. While the scenes occur at night both Romeo and Cyrano compare their lovers to light. In act three of Cyrano de Bergerac Cyrano agrees to help Christian court Roxane and by doing so he must hide underneath the balcony to conceal his identity. Eventually Cyrano takes over for Christian because he wishes to express his fondness for Roxane himself, but still hidden by the darkness.

Night, making all things dimly beautiful, one veil over us both… and I [see] the whiteness of a summer gown, you are all light- I am all shadows. ” Cyrano is comparing his repulsive nose to Roxane’s beauty, calling himself the darkness of the night which cannot be described or mentioned, versus Roxane’s exquisiteness which reminds Cyrano of summer. Not only does he compare her to light but he calls her the light of his life, that without her his life would be dismal.

Technically Cyrano is supposed to be speaking for Christian in this situation but he is in fact speaking from the heart. He is concerned that Roxane will not love and respect him because of his nose, and because of this he keeps himself in the dark literally and metaphorically. Whereas Cyrano has loved his dear cousin all his life, but hidden his true feelings, Romeo falls in love at first sight and takes no hesitation to express his love for Juliet. While hiding in the gardens surrounding Juliet’s window, Romeo states, “But soft, what light through yonder window breaks?

It is the east and Juliet is the sun! ” (II, ii 2-3). This scene initiates one of the plays most beautiful and famous sequences, it is a prime example of the light and dark motif that runs throughout the play. The beauty of the night, with the moon rays shinning, adds to the romantic nature of the scene and seems to “light up” the act. Shakespeare uses a metaphor here to express Romeo’s love for Juliet. He has such belief in her that he knows she has the power to banish the night and turn it into day with her beauty.

They both feel as if the other is the bright light in the darkness, and that they will guide each other through the dark obstacles to a life of pure love and happiness. Through out the plays society also fights against each set of lovers, society has taught them that it is not reality for them to spend their lives together. Rostand expresses through the play that society during the 1600’s did not consider a person for their inner personality but only judged them for their outer appearance.

During Cyrano’s speech to Roxane in the third act he says, “Is it not so to be myself to you, and have no fear of moving you to laughter? In this situation Cyrano does not feel confidence in himself and almost lets his hidden identity to become discovered. He does not feel he is worthy of Roxane’s attention so he hides behind the poetry he reads to her. Because Cyrano doesn’t think that Roxane will have him, he enters into the deceptive relationship with Christian, who is society’s standard of physical beauty in a man. Cyrano verbalizes his innermost thoughts to Roxane through Christian’s name which reveals his true love for her. He successfully woos her with his words, and Christian and Roxane eventually marry.

Thus, he loses the love of his life because he can’t approach her due to his lack of confidence based on society’s views of him and his rather large nose. Much of Romeo and Juliet involves the lovers’ struggles against social standards that oppose the existence of their love. Without knowing that Romeo is below her window, Juliet speaks, “O Romeo, Romeo, wherefore art thou Romeo? Deny thy father and refuse thy name. And I’ll no longer be a Capulet” (II, ii 33-35). Juliet knows that not only society but the raging families would not approve of their love, but that does not stop her from caring for Romeo.

She asks him to deny his family for her love but adds that if he will not, she will deny her family in order to be with him if he merely tells her that he loves her. There is clearly tension between family names and personal identity. Juliet believes that love comes from one’s inner identity, and that the feud between the Montague’s and the Capulet’s is based only on names. She later states, “What’s in a name that which we call a rose by any other word would smell as sweet” (II, ii 42-43).

Her love for Romeo surpasses her family’s hatred for the Montague name. She says that if Romeo were not called Romeo he would still be the person she loves and that societal views will not deteriorate their love. The characters within each play express true feelings and work hard and fight the odds in a balcony scene in order to live with one another, expressing their love eternally. Rostand paralleled Shakespeare’s balcony scene in order to convey the true love Cyrano held for Roxane the way Romeo expressed his love for Juliet.

Scenes in Plays Cyrano vs Romeo and Juliet. (2017, Jan 07). Retrieved from https://studymoose.com/scenes-in-plays-cyrano-vs-romeo-and-juliet-essay 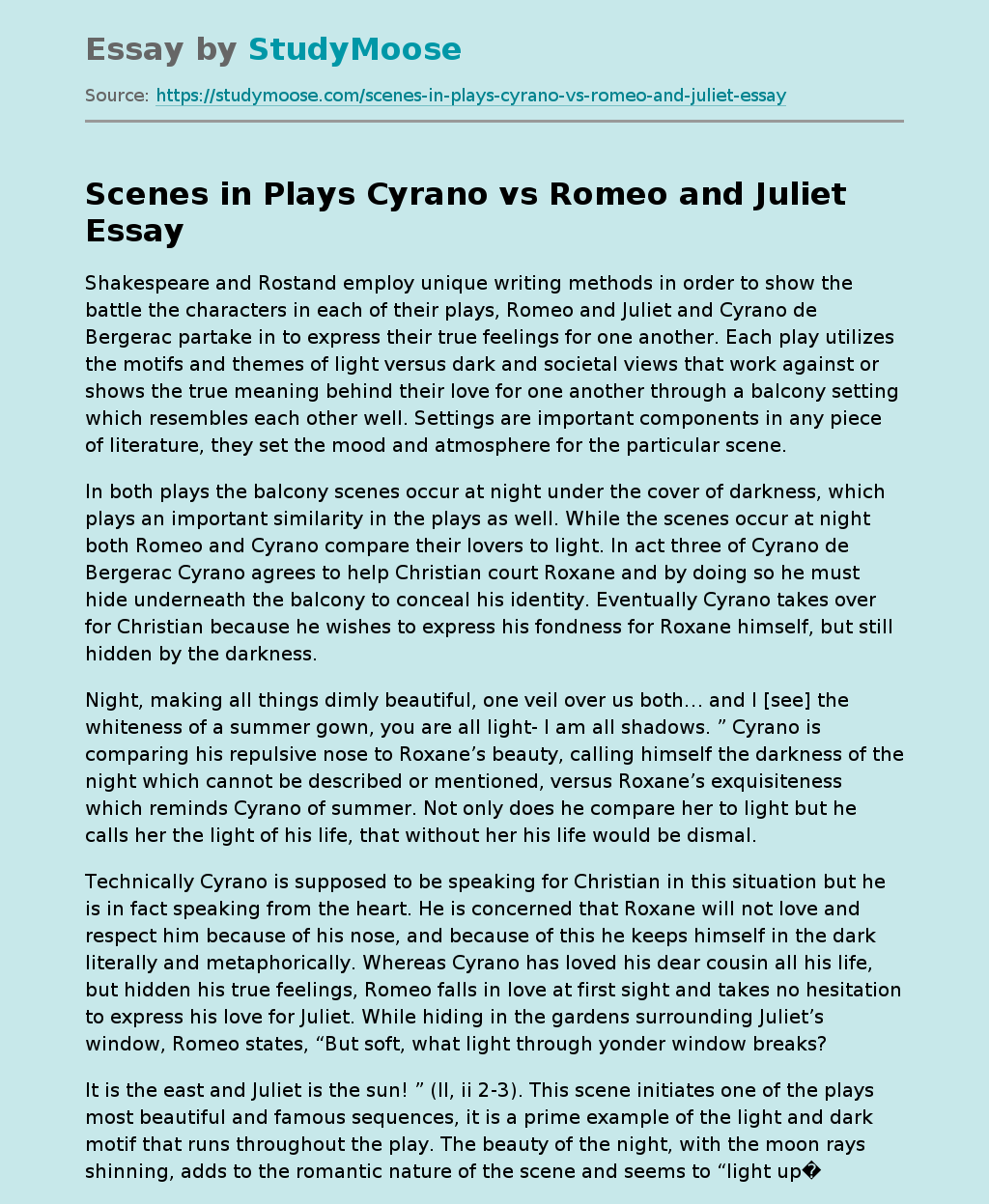