Saying No to Bullying in the School System

Abstract: Bullying has always been a part of the school experience, but In recent years everyone is learning that while bullying still exists, it has become more dangerous to our children and taken on different forms. This awareness has led to growing attention and plans to protect U. .S. students from the evolving phenomenon of bullying. Bullying in schools is a much more serious problem than it was in the past. Over a number of years, bulling has gone from just being picked on in the school yard to being cyber-bullied via text messaging, e-mails, and several social internet websites.

Don't use plagiarized sources. Get your custom essay on
“ Saying No to Bullying in the School System ”
Get custom paper
NEW! smart matching with writer

There are many other types of bullying such as verbal, derogatory comments, name calling, bullying through isolation or social exclusion, bullying through lies and rumors, being taunted or ridiculed by those that feel they are above others, sexual bullying as well as the ever popular physical bullying. All of these forms of bully have caused devastating and traumatizing effects within schools and communities across the Unites States.

Bullying within the school systems has now become a nationwide fight that parents, teachers, and even government and city officials are taking very seriously.

The stand against bully has become so serious that students that bully others are now being prosecuted, suspended, and expelled depending on the degree of the actions committed. I feel that the structure of the school systems as well as the mass media and other social networks have inadvertently cause separation amongst the students and created social segregation amongst the students within the schools, which in turn has helped to create some of the environments for bullying.

An example of this would be drawing attention to, catering or pointing out students that have more money than others.

The creation of caste type systems, such as “jocks”, “cheerleaders”, “nerds and geeks”, and then the groups that are shown special privilege are just some of the caste types that are ridiculed, bullied or bully others. All of these are forms of social segregation amongst the students that causes some to feel more superior or more inferior to others. Ordinarily, one would think that the individuals that are left out or don’t fit into any of the social categories or groups are the bullies when in fact the bullies can be found in all social groups and categories of school networks.

According to the Statistics of Bullying, “30% of U. S. students in grade six through ten are involved in moderate or frequent bullying, whether it be as the bully, as the victim, or both”. (1) (Statistics, 2001))Bullying is now considered to be one of the contributors to the rise in youth violence, youth suicides and youth homicide cases. These statistics remind me I was bullied when I was in school, through Jr. High and High levels. I also watched as other students and friends were bullied or abused in some fashion.

According to the Bureau of Justice Statistics – School of Crime and Safety, “46% of males and 26% of females have reported that they have been in a physical fight”. (Statistics, 2001) Now, what surprised me was that children in “lower grades reported being in twice as many physical fights as those in the higher grades. (Statistics, 2001) However there is a lower rate of serious violent crimes in the elementary level than in the middle school and high school levels. (Statistics, 2001) Some of the youth that I know say that the “revenge factor” and retaliation is one of the biggest problems in resisting bullying…

Today many parents are faced with the reality that their children must to go through school security, pass through metal detectors, and have their belongings searched for weapons before they can even begin the learning process. I know this from personal experience. I have friends who are parents considering homeschooling their children because of the level of fear they have for their children’s safety while at school. Now that bullying has become a national concern, task forces have been formed to help minimize and de-escalate situations within school.

Many schools across the nation, as well as my own high school, have police satellite stations set up on school property and police patrolling the school premises. Efforts within the education system are being made to try to minimize the new techniques students use in bullying. For example, some teachers do not allow cell phones in classrooms and some schools make their students sign their cell phones in and out of the main office on a daily basis. Schools have gone so far as to block social networks from all educational computers n school premises. As we continue to fight and monitor bullying within the U. S. School System, cities and states are also taking measures to let parents, students, and citizens know that bullying has evolved but will not be tolerated in any form that hurts our children. In closing, I feel that bullying has progressively gotten worse over the years, but the American publ ic has determined that now is the time to say “NO” to bullying in the U. S. School System because the reality is that it has gotten worse over the years.

Saying No to Bullying in the School System. (2020, Jun 02). Retrieved from https://studymoose.com/saying-no-bullying-school-system-new-essay 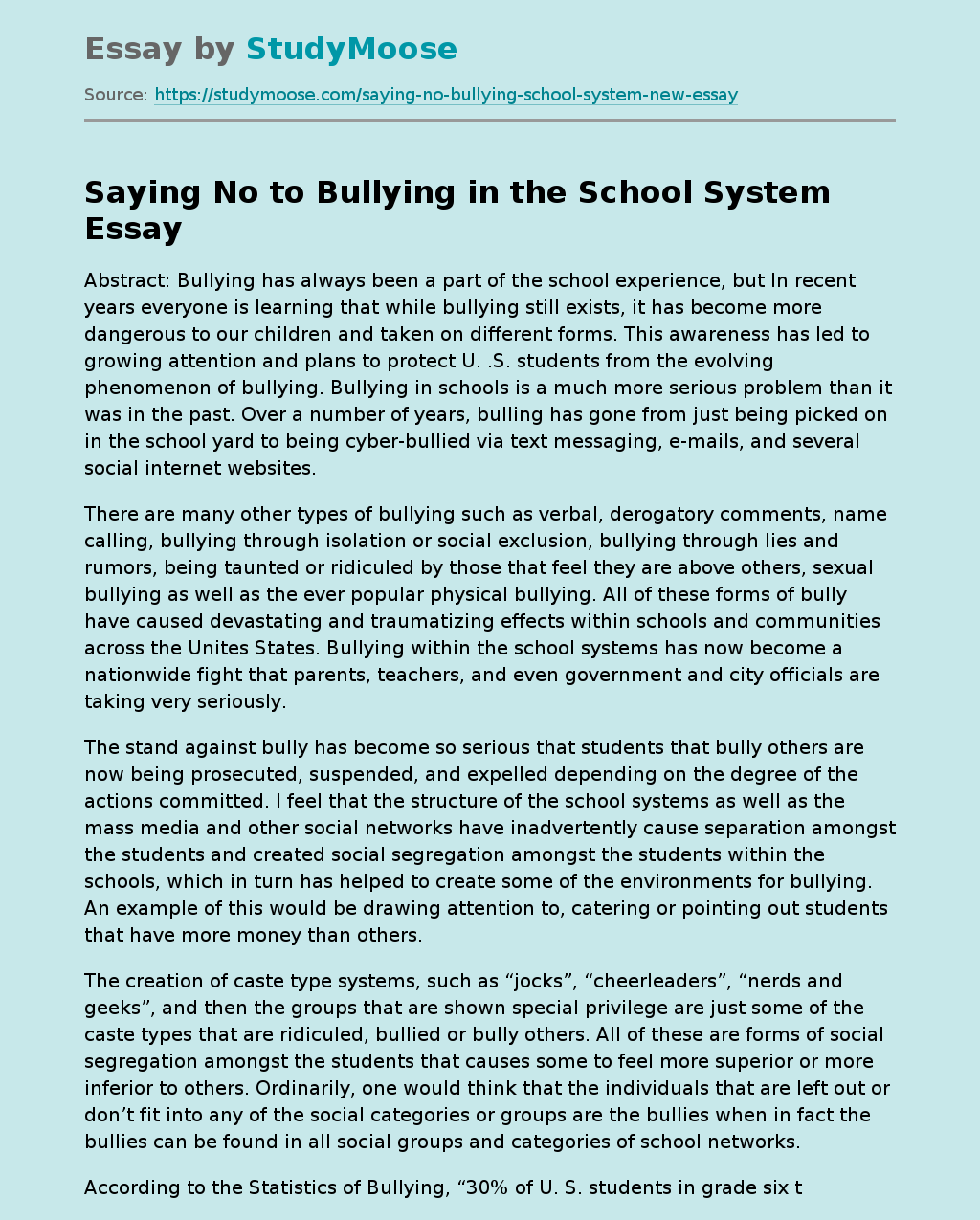