Save Nature For Future

With today’s growing population, resource consumption is becoming a huge concern. It is important that humans realize what is best for both our present and future generation, and what is best for our planet. We must preserve certain areas from being destroyed to keep their natural beauty. We should also conserve resources, so they can continue to flourish, but also so we can continue to live our lives without depleting these resources. Every individual unit of the environment works together to maintain a balance that supports the cycle of life.

Don't use plagiarized sources. Get your custom essay on
“ Save Nature For Future ”
Get custom paper
NEW! smart matching with writer

Humans must co-exist in a positive way with these units.

We should live in a way that does not exploit any part of nature. We should not only respect and sustain the environment for our own benefit and for future generations, but also because nature itself is good on its own. When looking at preservation and conservation, there is not one that is better the other. Like many other rules and sets of standards, there are exceptions.

Preservation is the action of protecting a certain thing or area completely. Conservation is a form of preservation, where we can use a particular resource or portion of land, in this case, but it is used sparingly and sustainably.

There are certain situations where preserving something is beneficial. Then there are other situations where conserving something would be better for a larger number of living things. It would be ideal to say that we should strive to preserve nature in all scenarios but that is not a practical approach because there are certain needs that we as human beings have to fulfill that we can only get from nature.

Certain medicines that keep people alive can be found in nature. If for instance a plant has the ability to save someone’s life, then it would be acceptable to cut that plant down to help heal the patient.

There are some exceptions to this of course. It would be wrong to cut down the plant if it was unable to be replaced. The plant should be plentiful and able to thrive as a species before we use it to help our own species. For the most part, humans are put on a higher scale than some other species. This is not to say that we should disregard those species or over-use them, but if it came down to a life or death situation for a person, using the plant would be ethical. There are other scenarios in which preservation would be a better approach. An example of this is mountaintop removal.

It does not seem ethical to be destroying such a beautiful object that forms naturally just so that we can have access to coal seams. The coal extracted from the mountain is only beneficial for a certain amount of time but the negative consequences from the whole process will be felt a lot longer (Copeland). Even though the mountain itself since it is not a living, breathing organism, it is important to respect the natural beauty of the mountain. The animals and plants that may reside on the mountain are also affected by this, and that should be taken into consideration.

Another example of a time when it is best to preserve is in the case of an endangered organism. Say for instance that a certain tree is being cut down at an alarming rate to make paper. The tree will cease to exist if we continue at the rate that we are going. Then we should stop all chopping down of that particular tree. We should preserve it and allow it to continue to live, not just so that in the future we still have that tree around to produce more paper, but because it is a living thing that has value on its own.

Our population is growing, and we have to figure out the best way to use our resources. Garrett Hardin also recognizes this as a problem in his essay “Lifeboat Ethics”, but takes the stance that if we help the poor people; we are hurting them in the long run. He believes that the biggest factor for overpopulation is the fact that poor countries multiply and increase their population at a much faster rate than countries that are predominately rich. Because of this, the problems associated with too many people in one area will continue to grow larger.

This is because rich countries have the resources to support their people more so than the poorer countries that cannot even begin to help their people (Hardin). Getting food is a major concern of many people who think that overpopulation is becoming a problem. Hardin also recognizes this as a problem, but takes the stance that if we help the poor people; we are hurting them in the long run. Conservation becomes important when taking the population into consideration. Overpopulation will have a large impact on the environment because there will obviously be more of a need for basic elements such as water, food, and shelter.

The increase of human life will create a huge blow for the environment. It is important that we prevent our world from becoming a commons open to everyone, where people use their resources foolishly and greedily. Since people are part of the whole equation that makes up the environment, we should care and respect others. However, in feeding the poor, they do not realize their problems and continue to reproduce, thus putting them and the country in a deeper hole. This too has an effect on the environment because in the search for food, people do things that do not support a sustainable cycle.

An example of this is the fact that since there are more people and getting meat to them is a long process, factory farms have taken the place of actual farms. Animals are now bred to grow faster and jacked up with hormones in an attempt to get them to the slaughterhouse faster so that the demands of consumers can be met. Also in order to keep up with more people, that means that there must be more animals to begin with. Livestock are crowded into small cages where they are unable to turn around, they are not able to live with their young, they pick up diseases and many other problems arise from this.

This affects the life of the livestock obviously, but also affects the life of the consumer who then eats the meat. It is understandable that individuals want to eat meat because they say it tastes good, it is high in protein, and it’s convenient as well. However, the way that humans do it is immoral and wrong. We do not give the animals any chance of survival or even a chance at life to begin with. It would be more justifiable for people to go out and hunt their meat like people used to do. Then the animals would be able to live a normal life up until they were killed.

Thus the crops that are grown to feed the cows could be fed to the people who need it. We could also stop cutting down trees and destroying forests that is normally needed in order to make room for all that food that needs to be produced. Around the world 756 million tons of grain is fed to livestock and almost half of the 225 million tons of soy that is produced yearly also goes to feed the animals that we eat (USDA). These crops could be used to feed people in starving countries. It could affect the lives of people right here in America.

Our population is growing very quickly and resources are becoming scarcer every day. We should want to preserve and conserve the natural world around us. Whether a person believes that another living thing has rights or not, they should still treat it with respect and care. One person or a small group of people should not make the ultimate decisions on what is considered worthy of life or unworthy. If people took the time to consider the feelings and consideration of the living things in nature, the world would be a better place not just for us now, but for future generations.

Save Nature For Future. (2018, Oct 04). Retrieved from https://studymoose.com/save-nature-for-future-essay 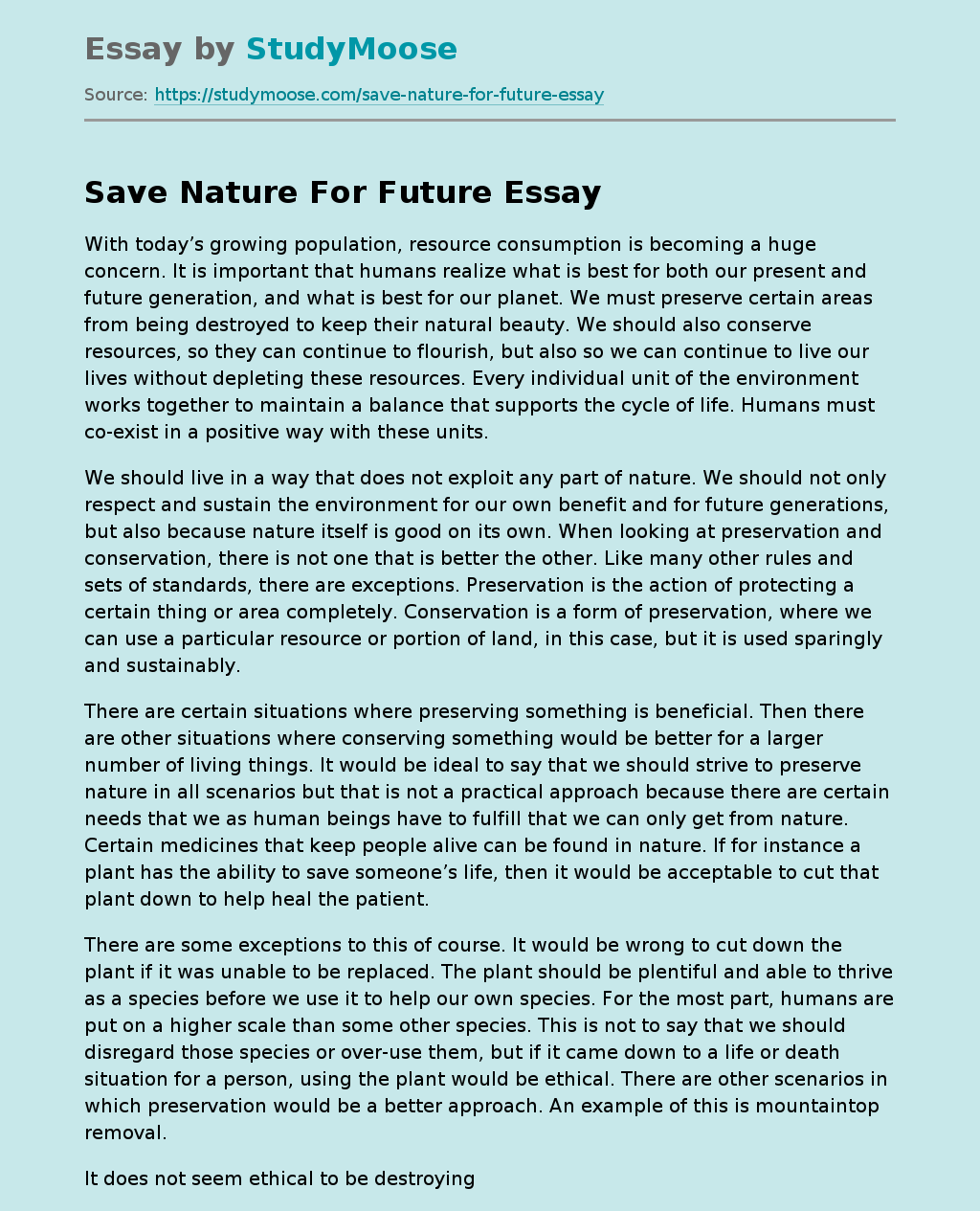