Joseph Heller’s most famous novel, Catch-22, was published on November 10, 1961. The novel was so successful the title even got a spot in the dictionary as a catchphrase. Catch-22 is a satirical war comedy that shows the times Heller had when he was in the war. Although Heller actually enjoyed the war, he uses histhe experiences he had to write the novel Catch 22 to make the novel become successful and popular among the anti-war community. Many people question what changed Heller’s opinion on the war.

Joseph Heller was an American author who was born on May 1st, 1923 in Coney Island, New York. His parents are Isaac and Lena Heller, and he has two siblings named Lee and Sylvia Heller. At the age of 19, Heller joined the war and became a bombardier during World War II. After the war, he went to Columbia University to receive his bachelor’s degree in English.

There are no statements from Heller as to why he changed his opinion on the war. Regardless of his opinions, Joseph Heller became popular among the anti-war community. Heller had many instances where he made jokes throughout the story, which caused it to make people laugh, and believe it was an anti-war novel, which it was. This is not the only reason though. In an article by Charlie Reilly, he interviewed Heller and asked him a few questions, but before that he stated, “Heller composed a brilliant attack not only upon the horror and lunacy of a just-completed war but upon the hypocrisy and savagery of the ongoing McCarthy witch-hunts (Reilly).

” The McCarthy witch-hunts were an instance where the Senator composed an idea of searching for people who were practicing communism, and send them to prison, or back to Russia. Heller wanted to point out how this stripped away peoples’ First Amendment rights. Not only did he focus on the McCarthy witch-hunts, but he also mainly focused on the war and how terrible it was. He told stories of instances in the war that were brutal, and he also told of instances in the war that made the American military look childish. His goal was to not only show his thoughts on war, but also show his experiences he had from the war. In the interview, Heller said “ I never wanted to write an autobiography, but part of my plan was to write a novel which contained autobiographical elements” (Heller). This quote from Heller tells us that a good bit of his novel is based on true facts that he had experienced when he was in the war. Knowing this, we can see how bad the war and military seems to either act towards other military members, or how it can drive people crazy. Even though at first he enjoyed the thought and just war itself, Heller saw how everything could change in an instant on the battlefield and he decided to base his novel off of it.

One peculiar thing that somehow made Heller’s book so successful was that he never followed a specific story line. All Hheller told were stories of instances that had knew had happened during his war experience. One critic explains the situation in this quote, saying “The chapters follow no evident plan; time in the novel is confused because there is no narrative line” (Muste). Muste said that readers would get confused, which could also mean readers would get hooked on the novel and keep wanting to read it until they understood the whole novel. This is how the novel became so successful, because many readers enjoyed the cliffhangers that were left in each chapter. Another reason this novel became so popular is because Heller planned on writing it similar to an autobiography. Robert Merrill explains this in one of his critical essays on Catch-22. He says, “there is the peculiar nature of Heller’s flashbacks. Indeed, to use the term “flashback” is a bit misleading, for the word usually implies an episode rendered dramatically and at some length. In Catch-22 there are a number of such episodes, but Heller presents much of the relevant material in oblique references, radically truncated scenes, and passing remarks in the dialogue”(Merrill). In a more simplified version of this quote, Merrill is explaining how experiences that Heller had written about were exaggerated. This really caught the eye of the anti-war community mainly because people did not see it in an exaggerated way, but they saw it in a way that made the war seem crazy. This made the novel very popular among the anti-war community because it showed, in their opinions, how their beliefs about war were correct. 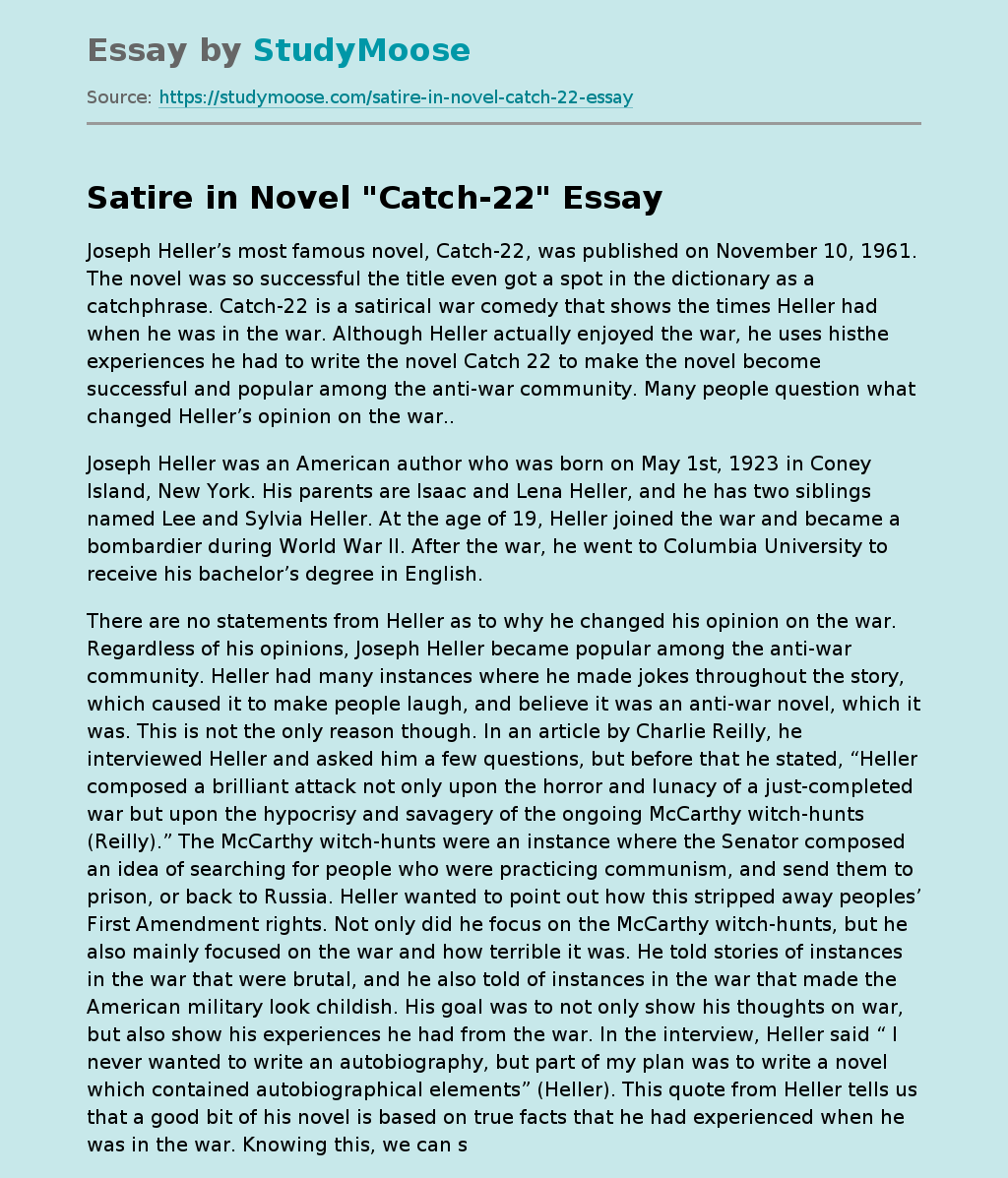