Sartre Said Hell Is Other People While Streisand Sang

Topic: Sartre said Hell is other people while Streisand sang; people who need other people are the luckiest people in the world. With whom do you agree with? The above statements present two very different perspectives regarding the social behaviors practiced around the world. One could even say that in the end it boils down to an extrovert Vs introvert or even optimism Vs pessimism debate, depending on how you look at it of course.

But let’s not make it more complicated than it already is.

Don't use plagiarized sources. Get your custom essay on
“ Sartre Said Hell Is Other People While Streisand Sang ”
Get custom paper
NEW! smart matching with writer

All the same, this Streisand fellow seems to be a complete picture of flamboyant merriment, the ideal optimist one can say—all due to the fact that he places utmost importance in the company of other people, obviously pointing to a philosophy that the pleasant company of other people is all that is needed to attain happiness. Dominated by an “optimist headed” society, one can’t help but agree with this perspective.

After all, aren’t we human beings described as socially dependant creatures? As human beings, we are thoroughly intelligent and full of emotional highs and lows…and what better way to share those highs and lows than with a faithful companion? It makes the ride much more enjoyable if we have an extra ear to hound, after all.

Usually our faithful companions (or rather “Naive dopes” as Alaster likes to put it) turn out to help us with more sticky situations and are promoted to being friends.

These friends have an undeniable positive affect on our practical lives as not only do they provide a vent for any wayward emotions and magically come to understand our ramblings, but it seems nice to share different perspectives every once a while.

Often you might have noticed that one of your friends takes something very seriously while you take it as a joke; this either stimulates a mind storming debate on an educational platform or rather, a personal dejection of the idea but rewarding the friend with a smile while they go on rambling, pretending to listen while really, you know how much of a nincompoop that friend really is.

Their good sense is not what matters here anyway. Secondly, many case studies have shown that the more friends you have, the firmer you’re footing is since you have so many people to back you up. They help you in your time of need, are always there for you. Heck, even family members can qualify for such a treatment; when you’re surrounded by people who give your opinion value and are there to listen to your near-nonsense ramblings, who is to say that your life is not perfect?

In contrast, even when you play the desperate card and seek out other people for their company or wisdom—it just shows how eager you are to increase the horizons of your perception and thinking, how interested you are in listening to what everyone else has to say, inevitably placing the building blocks of a society where everyone is heard and given importance to. All the more to go around! It is the perfect world don’t you think?

Either that or this Streisand fellow must have been some over-dosed hippie riding the imaginary train to Nederland; honestly, does this world exist? In our present time can we even hope for an existence close to that? Sartre makes more sense in this realm! Should we even bother to believe that we’re all saints? There is always some uncalled for black sheep to pull every golden-happy thought down from cloud nine and in the too-real mess of reality. It is not in human nature to allow the benefit of doubt, and honestly, neither does our over-inflated ego allow it.

Examples can be seen from history in the likes of Edison, Galileo and Socrates who were all scientists and philosophers in their own regard; when one of them came up with the discovery that the Earth was sphere, the ruling authority cried bloody murder and had him assassinated…and we all know what happened to Socrates, one of the leading philosophers of the Greek era and teacher of Aristotle who has a say in every subject. He was assassinated too; Poor fellow got poisoned by the very people he tried to educate.

Who is to say that there are not budding geniuses out there being kept quite by the fear of mass dejection? Masses decide the outcome after all. Logic would tell them to keep their words to themselves, while the martyr would probably try again and again to reach out to the uninformed public. Well there is a reason why they are called martyrs. Even on a small scale, there are always some groups who share a higher intellectual and a “holier-then-thou” platform and often prey on weak strays in order to completely butcher their individual sense of thinking.

Under the false pretense of the betterment of society, and a promise of popularity continue to pull them under their perspective. The more the merrier right? Our constantly supplied ego, enlarged to the size of Texas would make it seem safer to completely ignore the screaming voice inside your gut and “just do what he says” Trust is always an issue, so is the de facto dominance factor. You can never be too sure of who is doing what behind your back.

This is also to supply the never ending chain of he-said-she-said-what?! But this might be the bitter Sartre talking; we aren’t that bad are we? As an optimist, well maybe not. The pessimist might beg to differ though. In retrospect, however, one can not possibly deny the numerous good advantages derived from seeking other people’s company but on the other hand the evils of society and the annoying habit of our youth to do exactly what we warn them NOT to do…no wonder Sartre is complaining

Sartre Said Hell Is Other People While Streisand Sang. (2017, Jan 05). Retrieved from https://studymoose.com/sartre-said-hell-is-other-people-while-streisand-sang-essay 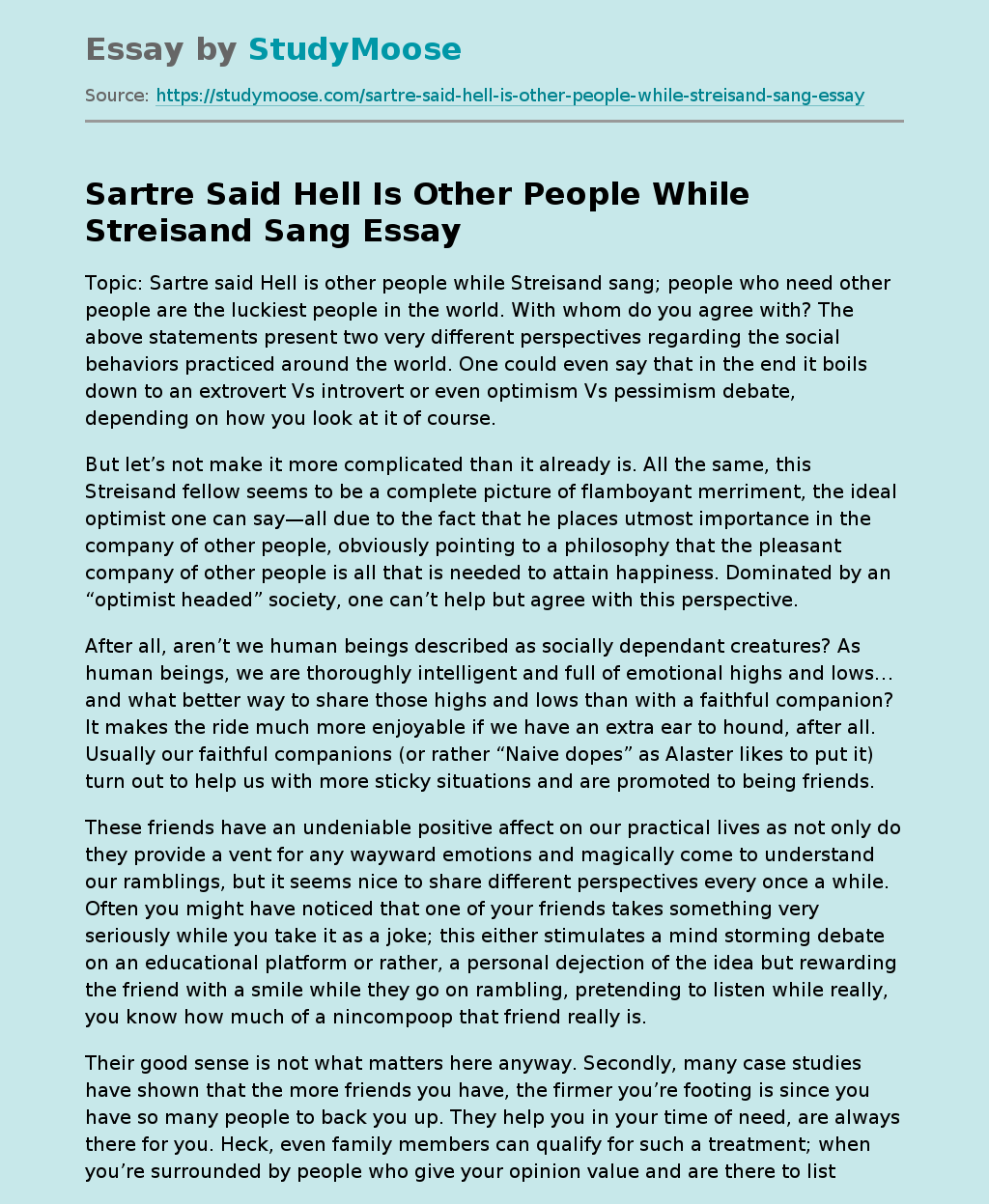