Sarojini Naidu - The Nightingale of India

Sarojini Naidu, also known by the sobriquet as The Nightingale of India, Naidu was born in 13 February 1879 in Hyderabad to a Bengali Hindu Kulin Brahmin family of Agorenath Chattopadhyay and Barada Sundari Devi. Her father was a doctor of science from Edinburgh University, settled in Hyderabad State, where he founded and administered the Ahmadabad College, which later became the Nizam’s College in Ahmadabad. Her mother was a poetess baji and used to write poetry in Bengali. Sarojini Naidu was the eldest among the eight siblings.

Don't use plagiarized sources. Get your custom essay on
“ Sarojini Naidu – The Nightingale of India ”
Get custom paper
NEW! smart matching with writer

Education Sarojini Naidu passed her Matriculation examination from the University of Madras.

She took four years’ break from her studies and concentrated upon studying various subjects. In 1895, she travelled to England to study first at King’s College London and later at Girton College, Cambridge. Marriage During her stay in England, Sarojini met Dr. Muthyala Govindarajulu Naidu, a non-Brahmin and a doctor by profession, and fell in love with him. After finishing her studies at the age of 19, she got married to him in 1898 during the time when inter-caste marriages were not allowed.

Her father approved the marriage and her marriage was a very happy one. The couple had five children.

Jayasurya, Padmaja, Randheer, Nilawar and Leelamani. Qualities of Sarojini Naidu Sarojini Naidu was truly one of the gems of the 20th century, a child prodigy, Indian independence activist and poet. Naidu was one of the framers of the Indian Constitution. Sarojini came through as a fragile woman, but an indomitable spirit, forward-minded and always open to new ideas, self-disciplined, optimistic, forward-looking and utterly free from prejudice of caste, creed, race, gender, nationality and religion, determined to fight for the cause of Indian women but above all for Hindu-Muslim unity.

She was famous for her wit and humour, for her capacity to laugh at herself and such was her closeness to Mahatma Gandhi that she could call him Micky Mouse and a man on whom riches had to be spent to keep him poor. Sarojini was a “die-hard bourgeois liberal”, a “faithful espouser of her party line” but and events. Indian Freedom Fighter Sarojini Naidu (extreme right) with Mahatma Gandhi during Salt Satyagraha, 1930 Sarojini Naidu joined the Indian national movement in the wake of partition of Bengal in 1905.

She briefed the struggles of freedom for independence to the political stalwarts of European nations, she had visited. She came into contact with Gopal Krishna Gokhale, who later introduced her to the stalwarts of the Indian freedom movement. She met Mahatma Gandhi, Pandit Jawaharlal Nehru, Annie Beasant, C. P. Ram swami Iyer and Muhammad Ali Jinnah. With such an encouraging environment, Sarojini later moved on to become leader of the Indian National Congress.

She traveled extensively to the United States of America and many European countries as the flag-bearer of the Indian Nationalist struggle. During 1915-1918, she travelled to different regions in India delivering lectures on social welfare, women empowerment and nationalism. She awakened the women of India and brought them out of the kitchen. In 1916, she took up the cause of the indigo workers of Champaran in the western district of Bihar. She also helped to establish the Women’s Indian Association (WIA) in 1917.

She was sent to London along with Annie Besant, President of WIA, to present the case for the women’s vote to the Joint Select Committee. In March 1919, the British government passed the Rowlatt Act by which the possession of seditious documents was deemed illegal. Mahatma Gandhi organized the Non-Cooperation Movement to protest and Naidu was the first to join the movement. Besides, Sarojini Naidu also actively campaigned for the Montagu-Chelmsford Reforms, the Khilafat issue, the Sabarmati Pact, the Satyagraha Pledge and the Civil Disobedience Movement.

Sarojini Naidu played a leading role in the civil disobedience movement. In 1942, Sarojini Naidu was arrested during the “Quit India” movement and was jailed for more than a year. Sarojini Naidu was the first woman Governor of Uttar Pradesh. Her chairmanship of the Asian Relations Conference in 1947 was highly-appraised. Poem hunter Sarojini Naidu was a brilliant student. She was proficient in Urdu, Telugu, English, Bengali, and Persian. At the age of twelve, Sarojini Naidu attained national fame when she topped the matriculation examination at Madras University.

Her father wanted her to become a mathematician or scientist but Sarojini Naidu was interested in poetry. Once she was working on an algebra problem, and when she couldn’t find the solution she decided to take a break, and in the same book she wrote her first inspired poetry. She got so enthused by this that she wrote “The Lady of the Lake”, a poem 1300 lines long. When her father saw that she was more interested in poetry than mathematics or science, he decided to encourage her. With her father’s support, she wrote the play “Maher Muneer” in the Persian language.

Dr. Chattopadhyaya distributed some copies among his friends and sent one copy to the Nawab of Hyderabad. Reading a beautiful play written by a young girl, the Nizam was very impressed. The college gave her a scholarship to study abroad. At the age of 16 she got admitted to King’s College of England and later at Girton College, Cambridge. There she met famous laureates of her time such as Arthur Symons and Edmond Gosse. It was Gosse who convinced Sarojini to stick to Indian themes-India’s great mountains, rivers, temples, social milieu, to express her poetry.

She depicted contemporary Indian life. Sarojini’s prose compares poorly with her poetry, but both are recognised for their emotional warmth and extravagant and high-faulting vocabulary. Her collections “The golden threshold (1905)”, “The bird of time (1912)”, and “The broken wing (1912)”, the sceptred flute (1943), the feather of the dawn (1961)”, the Indian weavers (1971)” attracted huge Indian and English readership. Her poems were admired by many prominent Indian politicians like Gopal Krishna Gokhale.

Her poems were lyrical with a “heightening of sensuality in the imagery, until every sense is stimulated to excess”. In the Bazaars of Hyderabad is a 19th-century poem. The poem is written in five paragraphs and it was published in her collection of poems “The Bird of Time (1912)” published from London, where she was attending higher studies. Naidu has described the beauty of a traditional Hyderabadi Bazaar. In this poem Sarojini Naidu describes the magnificent things of life along with common scenes in the Bazaars of Hyderabad; the poem is set in the form of conversation between customers and vendors.

The variety of activities and its colorfulness is vividly represented by the poetess to present an awesome picture of Indian culture. Each line of the poem contains rhythm and a beat, and the sequence What do you and O ye mark the rhyme scheme of the poem, and the poet often repeat these words, phrases, lines to create a musical effect to emphasize a point to draw attention to a point and to lend unity to a piece. To present the pictorial scene of the bazaar, Naidu has used rich sensory images-feel of touch, sense of sound, smell, sight and taste vibrantly.

Naidu presented the lively pictorial scenes of merchants, vendors, peddlers, goldsmiths, fruit men and flower girls selling their goods, they all similarly answer to the questions of purchaser who buy their articles after a detail bargaining. She presented the scene of the music produced by traditional instruments played by the musicians and the chantings of the magicians, the fruits like citron, pomegranate and plum are being sold by the fruit-men, while the vendors are weighing saffron, lentil and rice. The fragrance of sandalwood and henna can be smelt along with the smell of flowers which are woven into chaplets and garlands.

One can see the richness of wares in the bazaar; the poetess has mentioned coloures such as crimson, purple, silver, amber, azure and red. This shows what all goods are sold in a Hyderabadi bazaar. Turbans of crimson and silver, tunics of purple brocade, mirrors with panels of amber, daggers with handle of jade, chessmen, ivory dice, anklets, wristlets, rings, bells for the feet of blue pigeons, girdles of gold, and scabbards for the king are all examples of the expensive wares sold in the bazaars of Hyderabad. Sadly, few textbooks published in India on poetry carry her poems.

Sarojini Naidu - The Nightingale of India. (2016, Nov 26). Retrieved from https://studymoose.com/sarojini-naidu-the-nightingale-of-india-essay 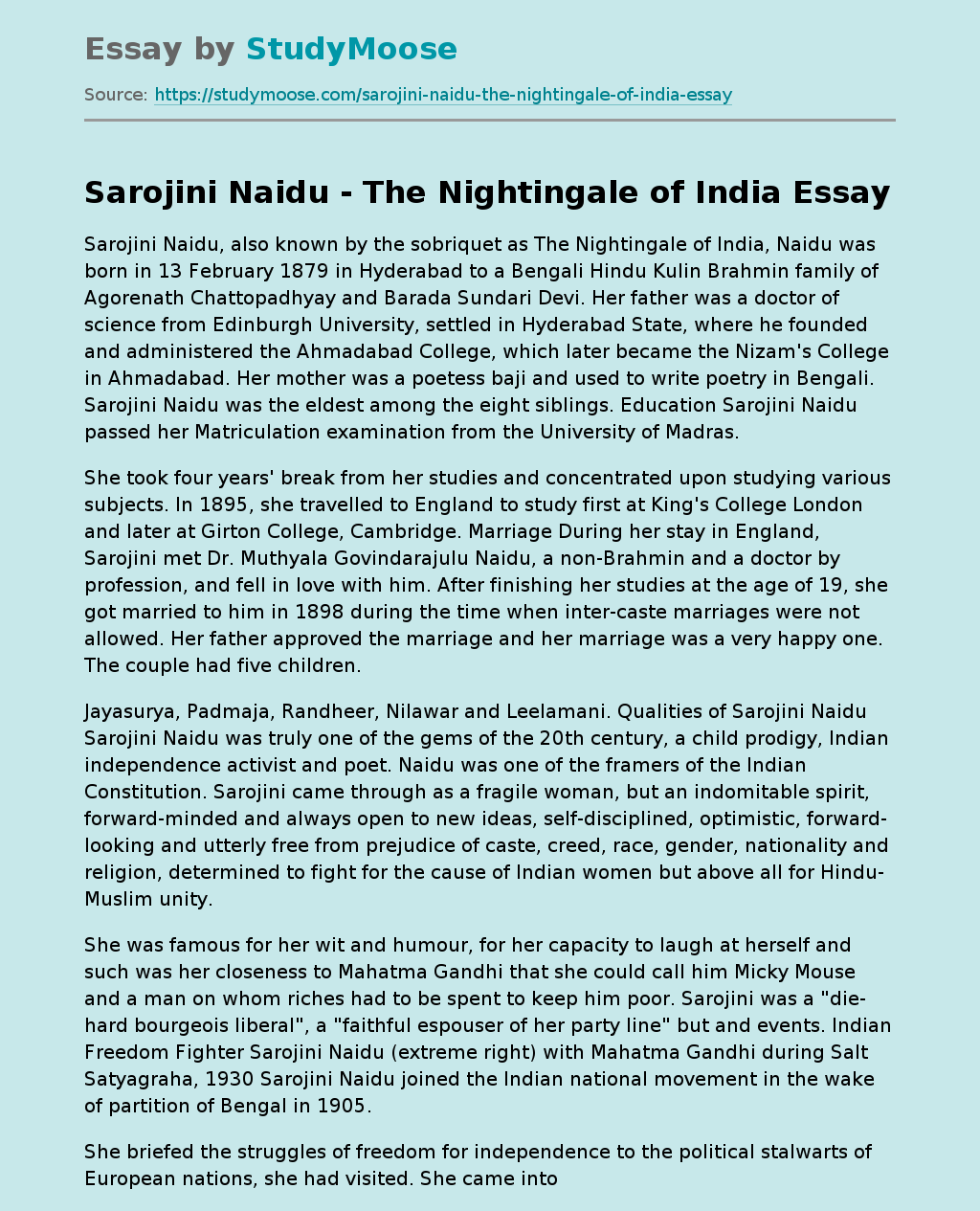