Santiago’s Sacrifice as a Christlike Figure

Throughout Chronicle of a Death Foretold, Gabriel Garcia Marquez symbolizes Santiago Nasar as a Christlike figure by utilizing numerous parallels with the physical and moral characteristics of Jesus Christ.

While the shared themes of fate, sin, and honor are chronicled within both texts, Marquez underlies his narrative with subliminal allusions between Santiago and Jesus Christ to provide commentary on cultural traditions and social order in Latin-American and Biblical societies. Marquez draws upon these cultural traditions like honor, that were destroyed during the lives of Santiago and Christ, but redeemed through their respective sacrifices.

Don't use plagiarized sources. Get your custom essay on
“ Santiago’s Sacrifice as a Christlike Figure ”
Get custom paper
NEW! smart matching with writer

Through the use of religious subtext, Gabriel García Márquez portrays the sacrifice of Santiago as a Christlike figure to prevent the destruction of order within his community.

By utilizing biblical allusions through character names and Santiago’s portrayal, Marquez is able to further delineate the community’s link to Christianity, culminating in Nasar’s murder. Firstly, this is denoted by Santiago’s own name, which is much akin to that of Jesus Christ. Translated from Ladino, the Sephardic-Spanish language, Santiago means Saint, which suggests sanctity and purity. Correspondingly, Nasar is derived from Nazareth, most commonly used in Jesus of Nazareth. The culmination of these names contrast substantially with the guiltiness of his community and “their own crime,” (Garcia Marquez, 118) resulting in Santiago’s death. Comparatively, Santiago’s community members are characterized as having similar names to Biblical ones as well. Clotilde Armenta, for example, can be translated to St. Clothilde, while Pablo and Pedro Vicario are analogous to the conflict-ridden Peter and Paul.

Likewise, their father Poncio Vicario can be compared to Pontius Pilate, who allowed for the crucifixion of Jesus, as he took no action to prevent his sons from murdering Nasar. With these numerous parallels, Gabriel Garcia Marquez directly compares the innocence of Santiago with the sanctity of Jesus, as well as the community’s sins with the historic social woes of Judea. Acting through sacrifice, Jesus and Santiago restore social order by dying for the honor of those who are guilty; their respective societies. By examining Santiago and his community through both their personal identity and through the lens of Christianity, the Christlike aspect of Nasar’s fate is further cemented to prevent the destruction of social order.

Moreover, throughout the novel, Marquez poses the question of whether or not the actions of society can overshadow the actions of an individual, which leads to Santiago inadvertently dying for the sins of his community. As seen through the Christian religion, the figure of Jesus died for the sins of his people, but to Pontius Pilate, who ordered him killed, it was a matter of honor. Despite reportedly finding “no basis for a charge against this man,” (The Bible, Luke 23:4) Pontius Pilate fell to pressure of those who expected him to take Christ’s life due to social order. Comparably, Santiago’s characterization of being a sacrificial lamb “in white linen” (Garcia Marquez, 3) falls to his Latin community’s moral obsession with “a matter of honor,” to cite Pablo Vicario, that existed “before God and before men.” (Garcia Marquez, 49)

This theme of moral submission is common within the social order of both Pilate’s regime and Santiago’s community, and helps Marquez argue that the desires and cultural traditions of societies can squander any individual moral virtue. This similarity creates an even stronger link between these two men through the redemption of sin in their deaths as they both act as a foils to their community’s guilt and sin. While Santiago and Jesus themselves had not committed any serious crimes, they are the ones that receive the blame and punishment through their respective sacrifices in dying for the sins of other.

Within the text of Chronicle of a Death Foretold, the actions surrounding the death of Jesus Christ are replicated to portray the of Santiago’s murder and establish the importance of fate in social order. “On the day they were going to kill him,” (Garcia Marquez, 1), as the first line of the novel claims, fate is symbolized as fact; it is unchangeable due to unmovable social forces in Santiago’s world, like restoration of honor, and the inability of his community to act. Similarly, the fate of Jesus Christ had been foretold by Old Testament writings, and was seen as an immovable force, as mentioned with “He would suffer execution but without the breaking of any of His bones” (The Bible, Psalms 34:20).

In Chronicle of a Death Foretold, it was the sins of his community acting as an ulterior force that brought about Santiago’s fate. From Father Amador, who “thought it had all been a fib” (Garcia Marquez, 35) to Mayor Don Lázaro Aponte, who believed Santiago “wasn’t in any danger anymore” (Garcia Marquez, 36), the foretold chain of guilt continues throughout the social order, far beyond Bayardo San Roman, Pablo and Pedro Vicario, and Angela, who sinfully blames Santiago; engulfing Santiago’s whole community. It is not only the community, however, that reflected his fate. Even further evident is Santiago’s choice to put on “a shirt and pants of white linen” (Garcia Marquez, 5), which Marquez utilizes with dual implications. Firstly, it shows an unquestionable resemblance to Jesus Christ, foreshadowing that he would be ‘sacrificed.’ Particularly with Santiago’s choice of white, representing purity and innocence, Marquez provides foreshadowing imagery of a “lamb being led to slaughter,”(The Bible, Acts 8:32) an allusion to New Testament scripture.

Secondly, the white linen alludes to historical Christian burial tradition in which the deceased are wrapped in a white linen shroud to represent what Jesus had worn during his crucifixion. Gabriel Garcia Marquez employs this knowledge to characterize Nasar as if he were already dead, symbolizing that his fate had already been prophesied, and that he will die a symbolic death. Similarly, as Marquez describes near the conclusion of the novel, Santiago is stabbed through his hand before the knives of Pedro and Pablo Vicario, actually reach his body. The knife is described as going through the palm of his right hand and then sank into his side” (Garcia Marquez, 117). This way of death is comparable to that of Jesus Christ, in that his hands and feet were nailed to the cross. This was referred to as the bleeding of hands in The Bible. Biblically, this cause of death is later supported by Santiago’s autopsy when Father Amador reports that it looked like a stigma of the crucified Christ. (Garcia Marquez, 75) Marquez uses these biblical descriptions help symbolize the societal magnitude of Santiago’s death, as he dies an innocent man for the sinful actions of his own community. Santiago’s fate restores honor to the Vicario twins, therefore preventing the destruction of the community’s social order.

Throughout the novel, Gabriel Garcia Marquez’s utilization of religious subtext helps portray Santiago as a Christlike figure whose sacrifice prevents the destruction of order within his community. With this, Marquez draws numerous parallels between Santiago Nasar and Jesus Christ to symbolize their sacrifices’ significance in restoring social order and taking ownership of their societies’ guilt and sin. Ultimately, the Chronicle of a Death Foretold serves as a literary testament to how the sacrifice of Christlike figures serve as universal commentary on the themes of fate, sin, honor, and the actions of society.

Santiago’s Sacrifice as a Christlike Figure. (2021, Dec 02). Retrieved from https://studymoose.com/santiago-s-sacrifice-as-a-christlike-figure-essay 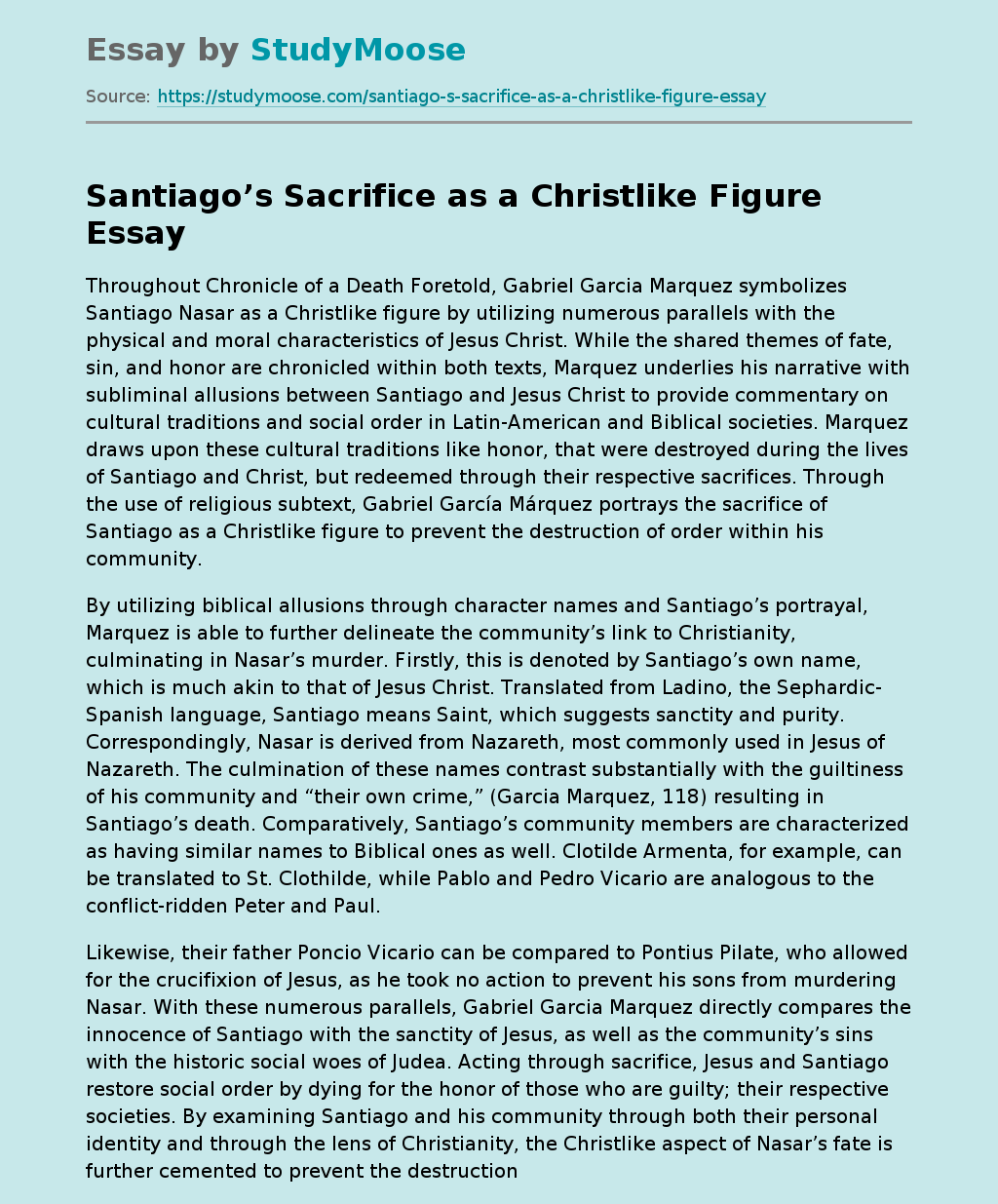