In 1946 in Cuba, which became the second home for the American writer Ernest Hemingway, the famous novel-parable “The Old Man and the Sea” was written.

The main hero of this story is Santiago, an old and experienced battle-scarred fisherman. He loves and belongs to the Mother Nature. Not only did he live his whole life in unity with nature and the sea, he is a particle of this world of nature. Despite his simple, compassionate nature Santiago remains one of the literature’s finest examples of a character exhibiting what Hemingway called “grace under pressure.

Don't use plagiarized sources. Get your custom essay on
“ Santiago character ”
Get custom paper
NEW! smart matching with writer

Santiago has been failed to catch the fish for eighty-four days. He is characterized as someone struggling against defeat. As a fisherman, all his dignity and honor depended on whether he could finish the task. He seems to struggle with the fact that he must prove himself to the other fishermen who mock him and believe him to be a fallen hero. Going eighty-four days without a catch, Santiago embarks on a journey initially to prove himself as a fisherman but later discovers that it was not the material possessions but rather the experience gained.

At first the old man catches small fish, after a while he felt that something huge was bumping into him, pulling the boat forward. Old fisherman Santiago finally found his long-awaited fish. However, the fish was so strong that it pulled the ship and the old fisherman towards the calm sea. Old fisherman Santiago believes that he could keep on, no matter how much longer the fish could hang on.

He withholds the will to continue and the courage to overcome what is believed to be the impossible. Despite the fact that situation got worse with the sharks all around his boat, the old man managed to return back as a winner. Even though only his marlin’s carcass is left by the end of the story, Santiago may be considered victorious because he never quit, valiantly fighting off the sharks until there was nothing left to fight for. He is optimistic by temperament. He has strong faith in success and confidence in future.

Santiago appears to be the spirit of struggle and hope in the difficult circumstances when defeat is certain for him. The way he hooks the big marlin seems like a miracle because no other fisherman would even think of staying against such a big fish in even less deeper waters than those where Santiago fought for his supremacy over the might of nature. Manolin is the only human being that is close to the old man – the only personal relationship that he has left in his life. Though lonely at times, Santiago’s love and determination to win never diminishes.

For Santiago, what matters most in life is to live with great fervor and nobility according to his beliefs, to use his skills and nature’s gifts to the best of his ability, to struggle and endure and redeem his individual existence through his life’s work, to accept inevitable destruction with dignity, and to pass on to the next generation everything of value that he has gained.

We also can see the love an old fisherman has for a boy, and the sacrifice he is willing to make for him to become his fishing partner. Santiago represented a man full of strength, and similar to Christ, displayed the love a Father can have for a son – this is the character Santiago had, and who he was.

In a word, Hemingway described the old lonely fisherman, confronted the difficulties under the great pressure, which is desolate but full of tragic beauty. At the same time, this novel successfully created a real tough guy, making the audience admire Santiago’s brave character very much. The protagonist personality of old fisherman Santiago is quite successful, pushing people to a new level. It is really unique, and inspires today’s young people, and it creates a very far-reaching practical significance to the young people.

And finally, the most important conclusion of the story – the old man is defeated, but he also remains undefeated, and his human dignity triumphs. The story “The Old Man and the Sea” is close to the literary genre of the parable, which is based on allegories and contains a moral precept.

, and that he himself, because he is able to fight so hard, is a worthy fisherman. This connectedness to the world around him eventually elevates Santiago beyond what would otherwise be his defeat. Like Christ, to whom Santiago is unashamedly compared at the end of the novella, the old man’s physical suffering leads to a more significant spiritual triumph. 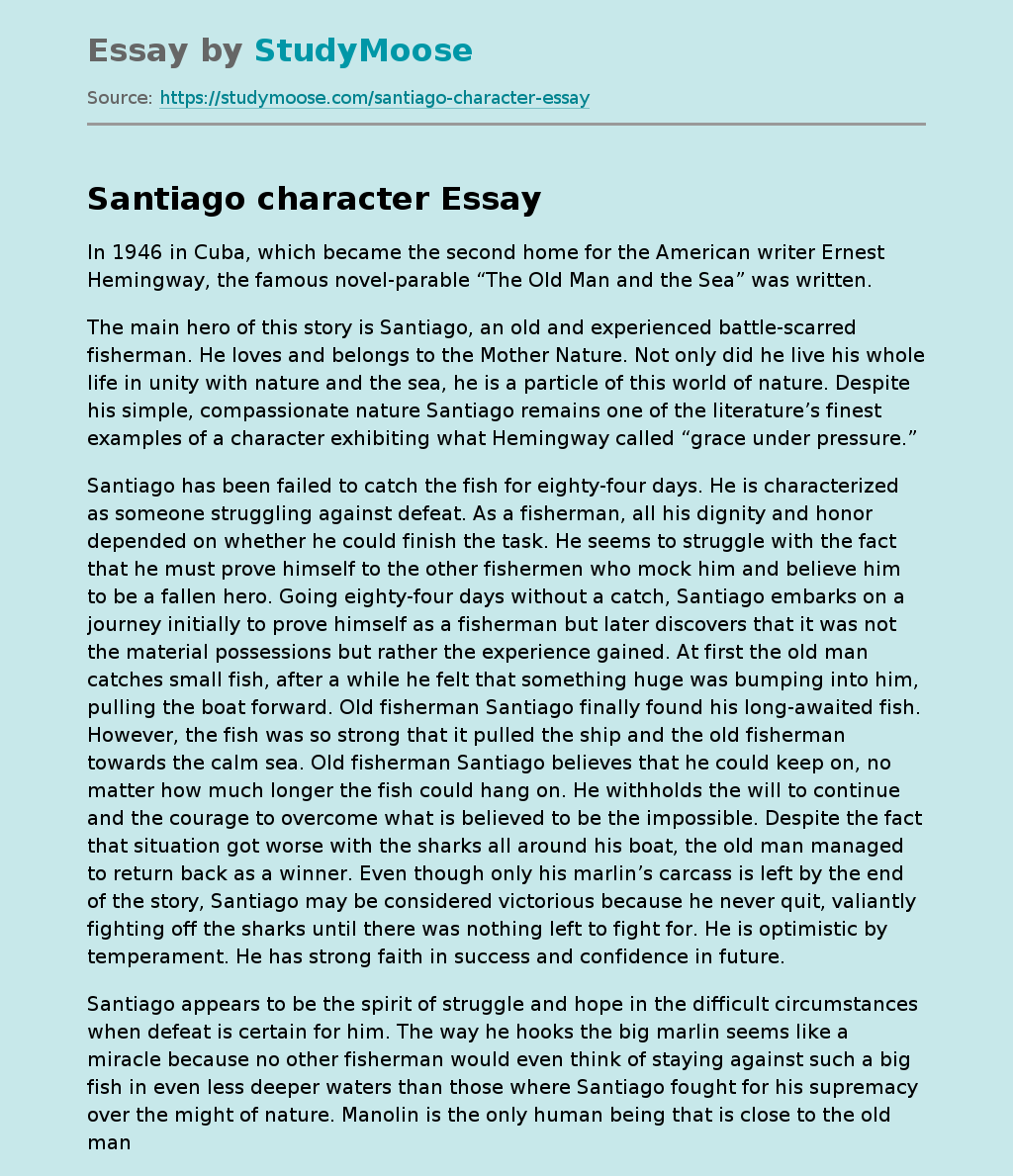