The company was tottering under a P47.1 billion on debt, high fixed cost and weighted down by large-scale expansion projects in China. Its three breweries in the said country were operating way below capacity. To get much needed cash infusion, Cojuangco sold off SMC’s 45 percent stake to Nestle Philippines.

San Miguel Foundation, Inc. is committed to the empowerment of San Miguel host communities and various stakeholders by harnessing corporate social responsibility among the various. San Miguel business is pursuing mutually beneficial programs that lead to self-reliance and responsibility.

Fundamental and Historical Philosophy-Profit with Honor.

A. BOARD OF DIRECTORS

-Asia has an emerging economy. Asia is widely known provide its cheap labor. When China and Taiwan were admitted into the WTO in 2002. Beer could now be compled and expented to the two countrie. The South Korea mostly brewed from rice. Only the Hites’svMax Prime brand contains 100% barley malt.

-The rapid technological advancement will affect the San Miguel and also their prices will affected.

– The similar of the culture around Asia greatly affect San Miguel Corporation. SMC was the first Filipino Company that publish an Environmental update in 1996,which wa received by local business Community and Stockholders. The Uniqueness of SMC environment program is it deals focus on both the external and internal environment. The Corporation not only takes care the natural environment but also of its people.

– Although Foreign beers are popular with in the country, the Thai government seek to shelter its domestics breweries through the imposition of import duties, in addition, all imported bers must bear an imported stickers on their bottle caps. As a result, Thai brewers stuck partnership deals with western brewers such as SAN MIGUEL CORPORATION.

– SMC is the leader in the beer industry in the Philippnes, its main rival is ASIA BREWERY, but the competition is low.

THREAT OF NEW ENTRANTS
– The beer industry in the Philippines is almost monopoly by San Miguel Corporation.

THREAT OF SUBSTITUTE PRODUCTS
– With Local and Multinational Company offering products and campaining for follow lifestyle to Consumers. They can chat with each other during drink the beer and something like peanuts,pork,& chicke.

– The Suppliers of the company hold a major role. Without it presence, the company could not produce its product and basically, could not offer anything to customer. The suppliers of San Miguel to each country are being standardized, thus, it could not purchase it locally unlessit has been approved & has passed the company’s standard.

– San Miguel has a significantly high bargaining power to its customers due to the monopoly in the Philippines. Now in the modern life, there is heavy pressure from life and work. As a result, the role of the San Miguel beer generally provide one way to slow the pressure.

It is very diverse and it has its hard on many business which includes:

San Miguel will be among the largest food, beverage and packaging companies in the Asia-Pacific. We will carry into new markets our over a Century-Old tradition of quality and integrity. Consumers will take pleasure in reaching for our products and services because they are the best value for money. Our food and beverages brands will be in every household and every retail outlet. We will meet our customer’s everyday needs, delightning their every taste. Through our products and services, every occasion to drink and eat will bring enjoyment-a Celebration.

MARKETING- The SMC has a marketing team that study their product in the market. FINANCIAL- The Financial Resources of the SMC comes from their Shareholders.

OPERATION AND LOGISTICS
– The SMC has an Operating and Logistics Team that forecast their salesnand demands and monitors the prices of their product.

HUMAN RESOURCES
– SMC strong social responsibility commitment contributes to better employee retention, resulting to a considerable reduction in turnover and training cost. Employees normally remain working with the corporation because of their feeling that SMC cares. Employee programs that help reduce absenteeism actually save the Corporation money as they encourage increased in productivity. On the home font, programs that address employee welfare instill a sense of pride in the people for being part of SMC.

– SMC has a information system that will serve as a news to feeder for them.

It is known a leader in the beer business
It is already Globally & Internationally known.
It is largevgroup of company.
All things are being detailed.
The company is diverse into not-allied business.
The company is strict with the quality of its product.
The company implement strategic planning.

The company has large market sale.
The company suffered from credit rating downfall.
Dynamic market environment.
Losing its International assets.
Their planning process is too long.
Competition is very tough.
There are lots group of people to be involved. 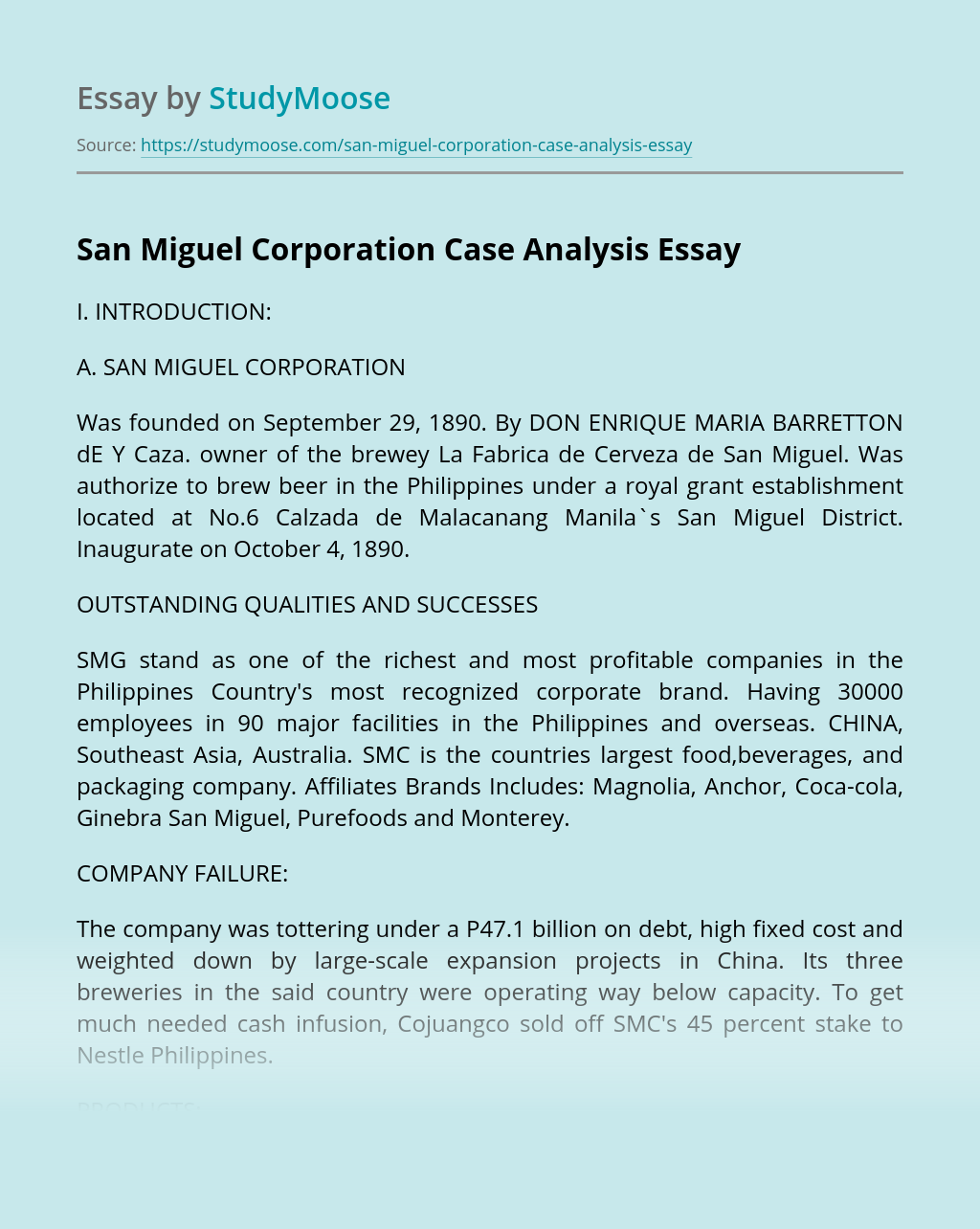