This response is in the form of a persuasive speech that might be presented to a group of senior high school students who have begun to ask questions about their identity and belonging, such as ‘Who am I?’ and ‘Where do I belong?’ It’s intended audience are adolescents who, as they are trying to discover who they are and where they fit into school, society and on a global scale, are wondering how much influence their appearance has on how they are perceived by others.

Don't use plagiarized sources.
Get Your Custom Essay on Sample Flap + C Just from $13,9/Page

References have been made to a range of recent articles that have appeared in the ‘Herald Sun’ focused on ideas of both identity and belonging, and popular literary texts such as ‘Does my head look big in this?’, as well as the selected text, Skin.

One of the central representations of identity in Skin is Sandra’s appearance, and how being a black woman in a white family living in apartheid South Africa impacts not only on how Sandra views herself, but also how she is viewed by her family and the wider society.

Sandra questions her identity and her first experiences of being an ‘outsider’ occur when she reaches school. Being subjected to ridicule and racial stereotypes not only leaves her questioning her skin color and her relationships with those she loves, but also where she fits in and belongs.

A speech provides a suitable form for a personal exploration of these ideas, with the aim of encouraging the audience to question who they are, what they base their opinion of others on, and where they belong in the world. The speech has been written from a young adults point of view, allowing the students to further connect with the speaker, and what they are saying. The incorporation of informal language and colloquialisms has allowed the speech to come across as personal, and yet at the same time touching those listening. The informal language connects to the disengaged students who have been made to attend the talk, and allows all students to be able to listen and take in what is being said.

The film Skin has been drawn upon in several parts of the speech. There has been a large focus on Sandra’s first arrival at school and the reaction to her black appearance that the majority population makes. The impact of this, as well as her father’s reaction, has been drawn upon to highlight how
appearance effects the way that people are viewed within society. The ways that Sandra questions her own identity, such as what does it mean to be a black woman living in a white household, is she still classified as white if her skin colour is black and what effect her skin colour has on who she is and how she views herself have been drawn upon within the speech. These have been linked to how the protagonist in ‘Does my head look big in this?’ and her friends, school and wider societies reaction when she decides to wear a hijab full time, and the ideas portrayed within the article ‘Good looks do matter’. 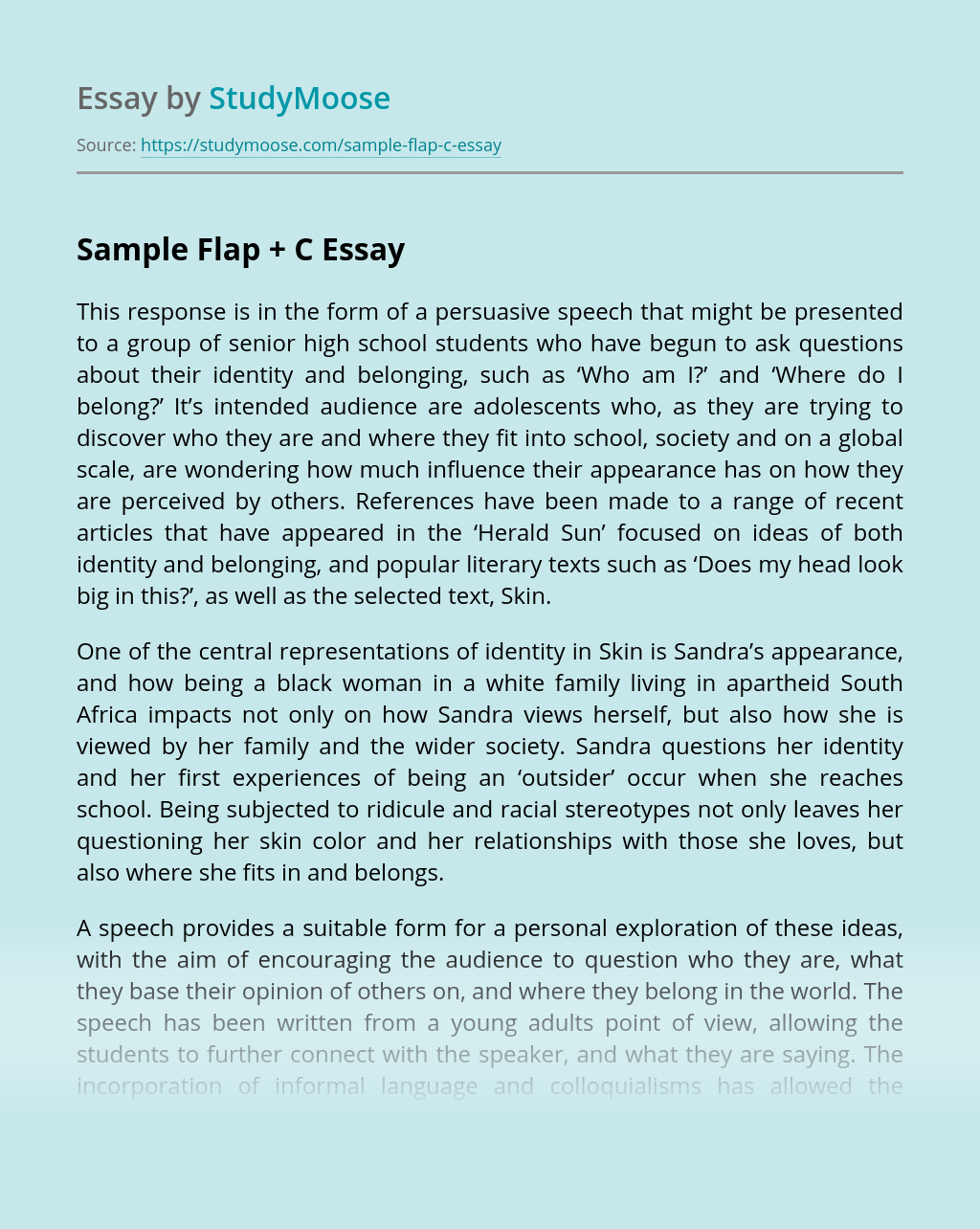 The Important of Having Cell Phone

In the past, people were used to drinking instant coffee. This was before the advent of specialty coffee shops in the country. Today, coffee shops are a common sight especially in the Manila metropolis. Specialty coffee refers to the highest-quality green coffee beans roasted to their greatest flavor potential by true craftspeople and then properly...

Accounting, known by and large to be a skilled, remunerative, but rather dry profession, has a long and fascinating history. In existence practically from the dawn of civilization, in one form or the other, accounting activity has been integral to some of the most important phases of history. Responsible for the invention of writing, accountants...

The Red-Eared Slider Turtle (Trachemys scripta elegans) inhabit freshwater lakes, streams, swamps, ponds and rivers. Male sliders become sexually mature when they are between 2 and 5 years old and are about 4 inches long. Females take longer to mature, reaching maturity when they are 5 to 7 years old and 6 to 7. 5...

Galileo on religion and science

Explain Galileo’s attempt to make science and religion compatible, with particular reference to methods of justification. How successful is he? Use Kuhn’s notion of incommensurability to investigate Galileo’s attempt to reconcile the propositions of science and religion. There will always be a battle between religion and science, it is a truth universally acknowledged. Galileo attempted...