Should We Spend More Money on the Military?

This topic has been going for debate for decades between the Pentagon and the Welfare State. When our country was first starting off the military was an essential part to this country. At our state of time, I don’t think this much money should be going to it. A lot of people think we are vulnerable because we are spending a lot of money on different things, such as welfare, food stamps, social security, medicare, and other benefits.

Don't use plagiarized sources. Get your custom essay on
“ Should We Spend More Money on the Military? ”
Get custom paper
NEW! smart matching with writer

NATO spending is still rising, and they are pushing for higher spending. We have increased spending more than we have in the past two decades. This makes us overspend on the military.

The congress has also decided that we should give a raise to the troops. This includes a 2.6% raise. They are pushing for this by 2019. This has been the highest raise since 2010. If the military wants a boost in spending, they need to justify their reason for the boost. They should know where the money comes from, they would need budgetary vision, they need to know how the increase would be deployed.

Our military has done things that make it seem like they’re wasting money. They would build ships, planes, and weapons that the pentagon did not request. They did this to provide jobs for for congressional districts. This would cause operation of unnecessary bases, massive cost overruns, and dubious combat systems. Money should be set by need, not by random operations. If anything we should spend spend some of the money on maintenance and improving readiness.

We want to spend more money on the military, yet we say that our economy is in danger of overheating. These two aren’t a good thing to mix up. We should not base our military spending on national security, we should base it off our economy. The money that they add to the budget has to come from somewhere else. We take the money from other budgets which seems like a solution, but it is not. By taking the money from other budgets, we fix the problem temporarily but not in the long run. The military could invest in improving the efficiency on how they get their supplies. This could save them billions of dollars. We could use this extra money to improve our worsening economy. It is outrageously out of line and this could help push it for improvement.

Congressman Barney Frank of Massachusetts said “If we do not make reductions approximating 25 percent of the military budget starting fairly soon, it will be impossible to continue the fund of adequate level of domestic activity” He also states that in 2001 our budget was $432 billions to $720 billion in 2011. That is an increase of about 67%. Most of this money came from borrowing. This increased debt tremendously. There are also many other reasons why debt has been growing. Tax cuts is responsible for some of it. Increase in government spending and the largest postwar recession play a big part in it too.

If we used our military investments in other things, such as education, it would represent an 18.5% boost in capital improvements nationwide. This would increase the financial struggles of public county schools and help keep them in good conditions. The republican party is all about being ready for terrorism, and being ready for the rising threat of nuclear power, and any other immediate threat confronted to the U.S.

When you look at our education system nationwide, it is viewed that we are struggling with it. This can be traced back to our big military spendings. If we look at NASA we can see that they cut their budget by about one billion dollars in the last three years. At the same time if we look at our military budget we can see that it is increasing by the same amount as all of NASA’s budget. I feel like this is a waste of our time and resources to be fighting wars that have nothing to do with us, than to have better research and outer space exploration and new discoveries.

Should We Spend More Money on the Military?. (2019, Dec 15). Retrieved from https://studymoose.com/sam-weeberwomackeng-11201-december-2018should-we-spend-more-money-example-essay 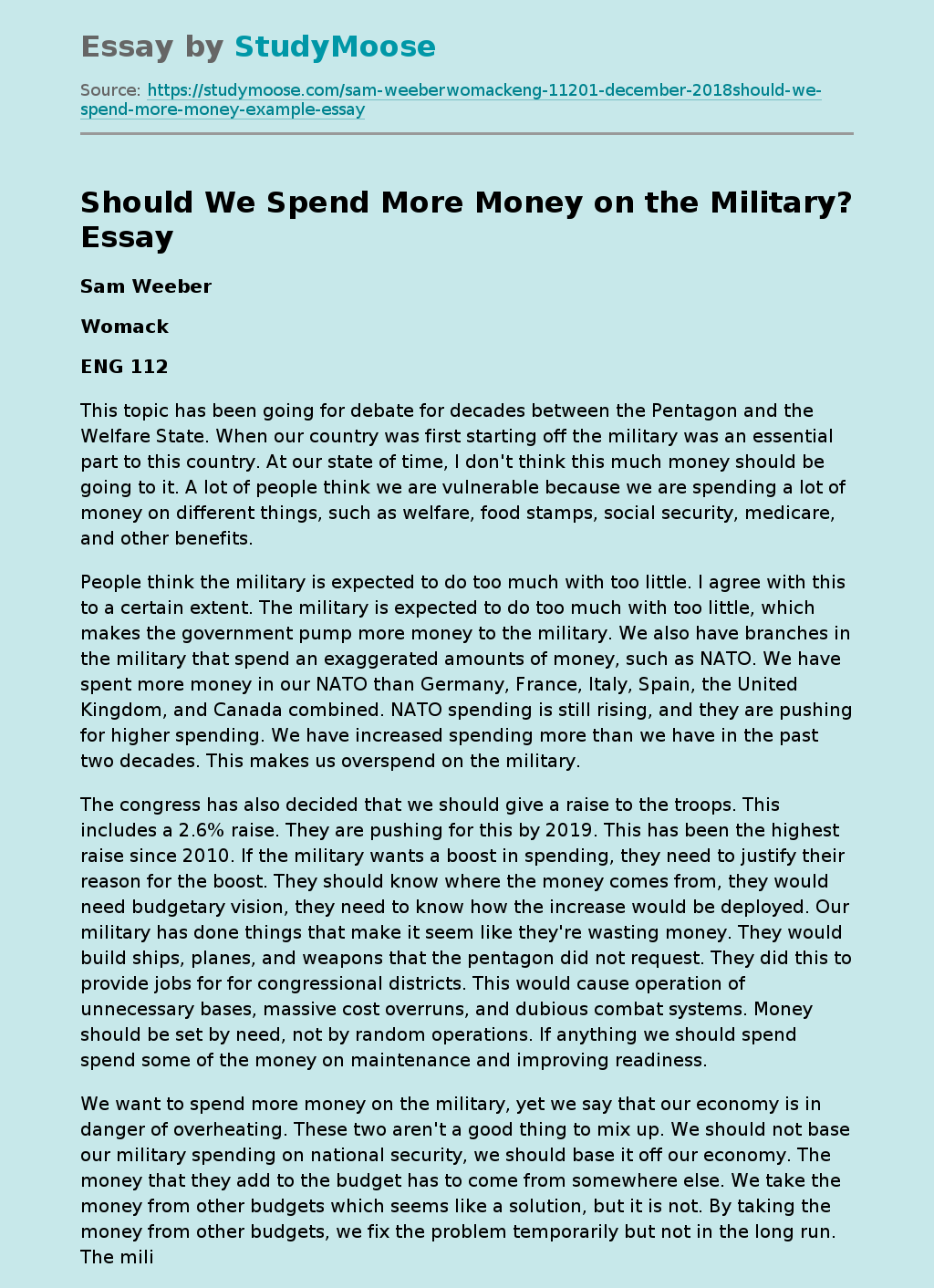