Trials today compared to the Salem witch trials of the 1690’s are different in many ways, as you may already know. Compared to then we have way more freedoms and privileges that some people take advantage of. Even though they are both places for justice, but they differ in the way you are defended, how the public opinion effected your trial, and religious bias.

During the Salem witch trials the defense you receive was very limited. When you where arrested it was solely based on accusation and no solid evidence that you where a witch.

Don't use plagiarized sources. Get your custom essay on
“ Salem Witch Trials VS Trials Today ”
Get custom paper
NEW! smart matching with writer

The court was ran on the opinions of women that felt threated of other women. Those accused of being a witch where not required to have a lawyer. The accused had very little chance of leaving the courtroom alive if a child spoke at their trial because the children at the time where thought of as innocent and unable to do any wrong. In todays courtrooms it is highly advised to have a solid defense or case.

In the courtrooms your trial is most of the time tried by a jury one of the luxuries that the 5th amendment gives us. Even before we get to the trial there must be hard evidence that the accused had something to do with the crime otherwise the person must be let free. If the person accused of the crime is truly guilty the punishment must fit the crime as stated in the 8th Amendment. Say if you where convicted of petty theft you wouldn’t get the death penalty, but if you did that in 1690 you probably dead.

Today the public opinion is strong in today’s society. There is always a debate on how power is split among our three branches of government. In Salem during the trials if one where to speak against the judges ruling they would have been punished along side the accused. Those who challenged the courts where thought to want to over throw the it. This offence was not taken lightly, it often resulted in death. This was meant to keep the people living in fear and not speak against the judges ruling. Death was the most popular of all the penalties given. It was especially meant for those who where convicted of being witches even the smallest of suspects. Today the opinions of others could keep you alive. Many people in today’s society are against the death penalty and others are pro death penalty, which is ok since we all are entitled to an opinion. That is why the death penalty is only used in the worst of felonies. That is why in Salem witchcraft was the worst offence anyone could do because it affected your morals and your believe system.

In Salem puritans where the main people in this location. Religion was a big deal in this time, it was one of the main reasons the puritans left England in the first place. In the courtrooms religion was the deciding factor whether you lived or not. The ones who decided you lived or you died where then ministers of the church. It was said that every case presented in the courtrooms there was one minister to call life or death. No one ever questions the judge but no one ever dared question a man of god. Most of the laws where created from morals of the bible. Those who did break the laws where always founded guilty due to the bias of those in the courtroom. The people that where found guilty sometimes had charges added to there list just because someone thought the crimes committed where worthy of death. In our present-day courts , we have the separation of church and state. That simply means that our government and religious problems should be and always separated and should never mix for any reason. Even if our religions shape some things politically they don’t fly in the court systems anymore. 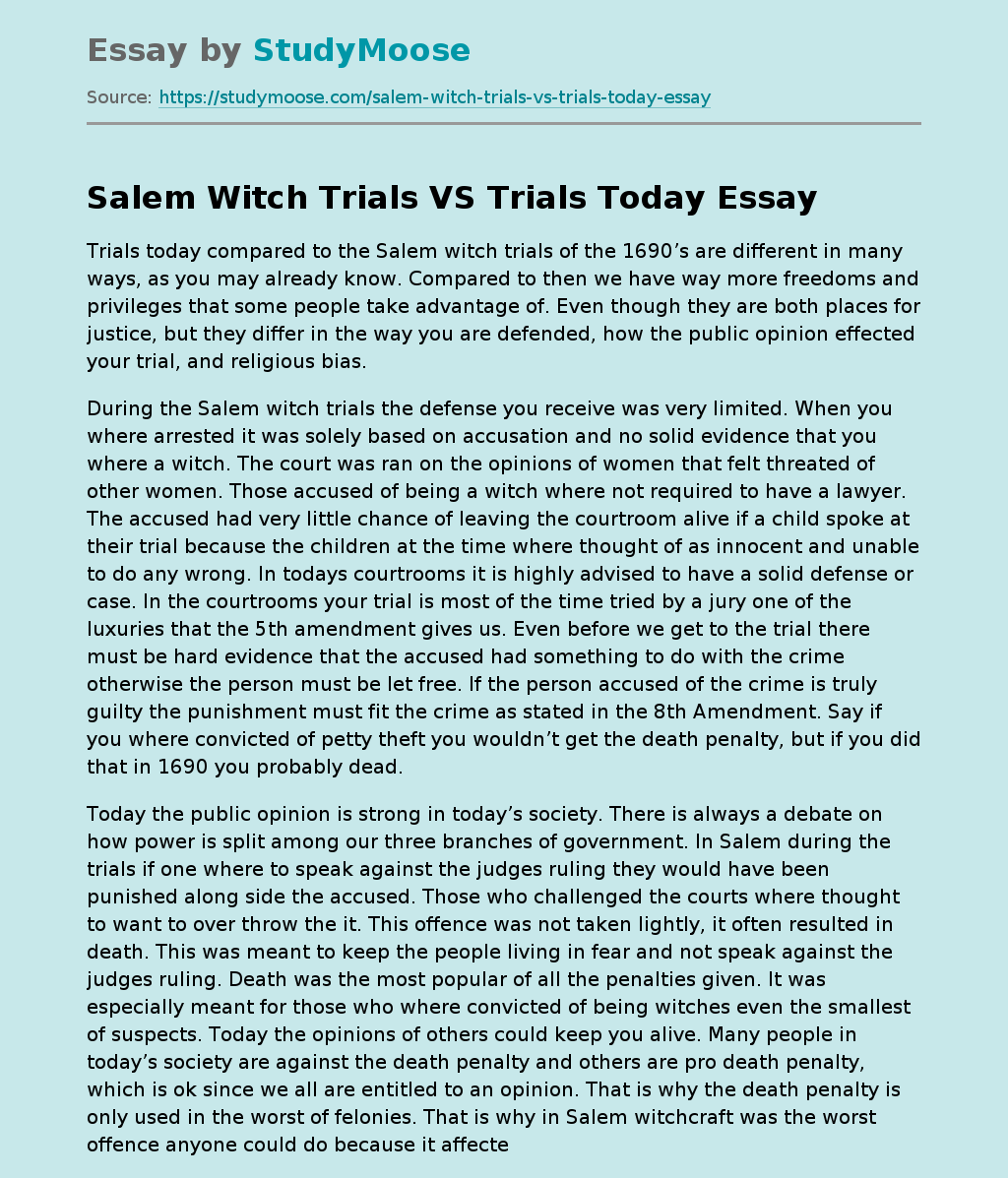