Even before the reader meet the monster, Mary Shelley builds up tension before its entrance. For example, “my candle was nearly burnt out” reinforces the nail-biting atmosphere and also comes back to the use of traditional Gothic. The readers’ first impression of the monster is given from Victor’s point of view and is therefore, slightly biased. Mary Shelley describes the monster as having a “shrivelled complexion and straight black lips” which automatically makes the reader pre-judge the monster because of his ghastly appearance and create a fear of him.

Don't use plagiarized sources. Get your custom essay on
“ Saintly soul ”
Get custom paper
NEW! smart matching with writer

The use of the modifier “shrivelled” to define the monster’s complexion emphasises the fact that the monster is constructed from dead body parts. Mary Shelley also goes on to describe the monster having “black lips” which links to the Gothic genre and the fear of the unknown. This could today be considered as a racist comment as Mary Shelley is making the reader judge the monster by the colour of his lips and “yellow skin”.

At that point in the nineteenth century, people were just beginning to become aware of other cultures owing to immigration.

However, a nineteenth century reader would still have felt an uncertainty towards different races as they were thought of as something “out there”, and this point is reflected through Victor’s opinion of the monster which is based on the colour of the monster’s skin. At this point in the novel, only the monster’s appearance expresses monstrosity and we cannot judge him solely upon his exterior.

On the other hand, Victor Frankenstein’s first impression upon the reader causes them to emphasise with the protagonist and feel compassion for him.

Robert Walton is the first character to meet Victor when “his limbs were nearly frozen, and his body dreadfully emaciated by fatigue and suffering” which makes the reader feel sympathetic towards him. As Victor is in a dreadful state, the reader feels concern and apprehension towards his condition. Mary Shelley’s use of the word “emaciating” suggests that Victor is gradually wasting away and the word “suffering” suggests that Victor is in a lot of pain and makes the reader feel he is a humble person who has come across harsh circumstances.

It is evident from the start of the novel that appearance is an important theme in the story as many of the character’s personalities and conditions revolve around the idea of appearance. Elizabeth’s character reflects this theme strongly, as she along with the monster, is alienated due to her appearance. She is an incredibly attractive woman and is therefore “initially singled out for her beauty” (York Notes Advanced). The characters of the novel treat her as though she is of a different species and Victor sees her as “a pretty present” and something to play with rather than an actual human being.

Due to her divine beauty Elizabeth is regarded as a spiritual and superior being, as she is described as having “celestial eyes” and a “saintly soul” which suggest that she is less of a real person and more of a heavenly angel. Mary Shelley wanted to show her reader how much one’s appearance can affect society’s opinion of them and therefore used Elizabeth to show how even the stunningly beautiful can be isolated because of their beauty. The main cause of both Victor and the monster’s sufferings is alienation.

The reasons for isolation

However, the reasons for their isolation from the rest of the world differ. The source of monster’s alienation is society as the monster longs for love and affection, “My heart yearned to be known and loved by these amiable creatures. “. The word “yearned “suggests that the monster has feelings and emotions and wants nothing more than acceptance into society. In contrast, Victor’s alienation from society is self-imposed as he allows his passion for science to overcome the love he has for his friends and family.

Frankenstein becomes so obsessed with discovering the secret to life that he becomes insensible towards his surroundings, “and the same feelings which made me neglect the scenes around me caused me also to forget those friends who were so many miles absent”. Victor pushes his loved ones away from him and suffers later in life because of this. The consequences of alienation in both of these character’s lives is that it unleashes the monster in both of them. The monster only wants to be appreciated and understood but in return all he receives is rejection and hurt which results in his misery and monstrosity. 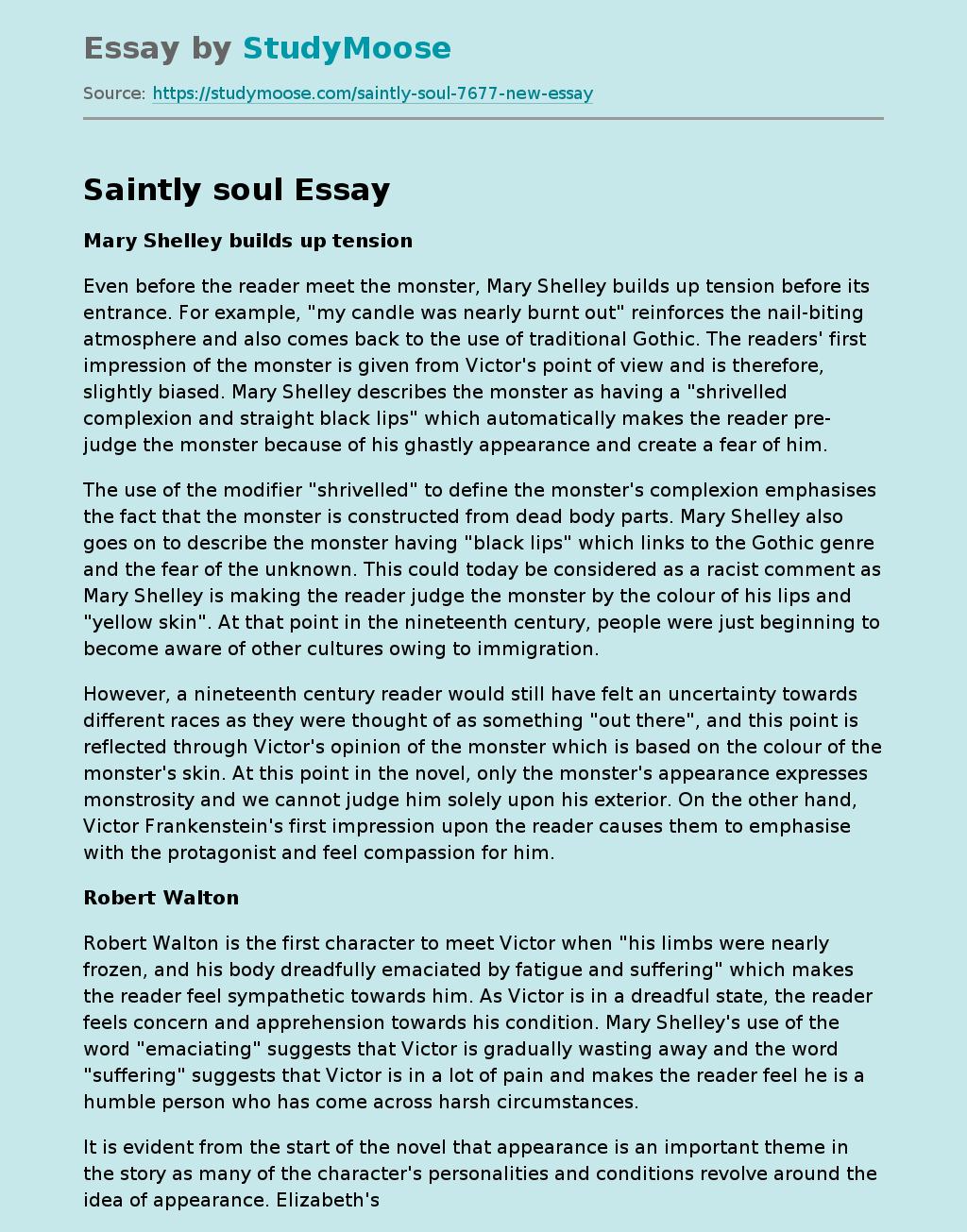