Don't use plagiarized sources. Get your custom essay on
“ Sahih Bukhari Book ”
Get custom paper
NEW! smart matching with writer

Many Centuries have passed now but we all depend on Sahih Bukhari and Sahih Muslim. Shah Abdul Aziz said that someone saw Imam Ali Nasfarani in a dream after his death and asked about his cause of salvation. He indicated toward Sahih Muslim and said Allah granted me just because of this. This dream proved that Sahih Muslim is accepted by Allah Almighty.

The best narration of Imam Muslim was that in which four relations come to the Holy Prophet? in the chain of narration.

There are more than 80 a hadith in Sahih Muslim. Thulathiat in which, chain has three relations to the Prophet ?, these are approximately twenty two in Sahih Bukhari but no one mentioned in Sahih Muslim.

Methodology for the compilation of Sahihain

Imam Bukhari also said that he wrote that book, sitting in Masjid Haram. He has done Istikhaarah then Nafl prayers and after the satisfaction of a chain of narration and the text he includes that hadith in the book. Abdul Quddus Hamam heard from his teacher that Imam Bukhari wrote the titles of Sahih Bukhari, sitting between the Holy grave and the pulpit of Messenger ?. He also offered two Raka’t Nafal prayers to write the title of Sahih Bukhari.

Imam Bukhari spent more than one-fourth part of his life for the compilation of his book and at the end he produced his epoch- making book which is accepted by all schools of thought. Imam Bukhari started journey to different areas and cities for the collection of hadith and he started his journey from the Holy city of Makkah. Imam Bukhari visited and stayed everywhere as long as his pursuits of hadith demand. He met traditionists and got a hadith from them and communicated to them for their own knowledge. Imam Bukhari didn’t hesitate to stay at one place for many years or more than one journey at a same place just for the sake of hadith knowledge. Hafiz Ibn Hajar said: “In starting Imam Bukhari visited these states to prepare his draft of book but for the final writing and compilation he sit in Masjid Haram”.

Imam Bukhari extracted many meanings from text of a hadith through his extraordinary abilities, and then divided it into different chapters. In some chapters he only wrote ayahs and didn’t discuss a hadith and sometimes not only wrote the interpretation of ayahs but also indicate the important points. Imam Nuwwi said that Imam Bukhari’s purpose was not only, the collection of Sahih a hadith but also the interpretation of problems related that hadith. That was the reason many of the chapters are empty from the chain of narration and he narrated that hadith with Prophet only and made it Mu’alaq, which is only used as a proof.

Some places there are many a hadith are included in a chapter and some chapters are without any hadith or ayah. So in a nutshell, all the styles used by Imam Bukhari for the compilation of Sahih Bukhari were deducted for the solution of all legal issues faced now a day.

Ibn Hajr wrote in Fatah Al Bari that the title of any chapter is for the easiness of the reader. The titles of Sahih Bukhari are the indication of Bukhari’s knowledge. Scholars concluded the purposes of his titles in these points which are briefly discuss as under:

In short, other narrators didn’t claim, but gives some other terms which were used by Imam Bukhari for a compilation of his book Al Jamai’ Al Sahih which are as under:

So the narrators should be on the 1st rank in these terms. There is an example of Hafiz Ibn Hajr in which he elaborated the authenticity of hadith based on five Segments of memory and company of teachers, which are discussed as under:

In 1st category the narrators who are intelligent and strong in their memory and they met many teachers for the learning of hadith. These narrators are considered the highest ranked narrators such as Younas bin Yazid, A’qeel bin Khalid, Malik bin Anus, Sufyan bin A’yneeyah and Shuaib bin Abi Hamza

Those narrators come in the second stage, who have strong memory which can be God gifted but they didn’t spend more time in the company of teachers. These types of people didn’t become expert in hadith so they came in 2nd category, such as Imam Awzaa’i, Laith bin S’aad, Abdul Rahman bin Khalid and Ibn Abi Za’ib. Imam Bukhari brought a hadith mostly from the narrators of 1st category. Sometimes, he chose a hadith from them, but after a lot of investigation.

The third category is for those who haven’t strong memory but they spend most part of their life with the teachers of a hadith such as Jafar bin Burqaan, Sufyaan bin Hussain and Ishaq bin Yahyah kalbi. Imam Muslim narrated a hadith from them but Imam Bukhari refused them.

They are the people who are neither strong in their memory nor having teachers for a hadith such as Zam’aa bin Saleh, Mua’awiyyah bin Yahya Al Sadfi and Munaa bin Sabah. They are the narrators to whom Imam Abu Dau’d narrated a hadith.

Abdul Qudus bin Habib, hakam bin Abdullah and Muhammad bin Saeed are included in the fifth category in which the narrators are weak. Imam Tirmizi sometimes took their hadith but Imam Maja took a hadith from them continuously. Imam Bukhari and Imam Muslim never took any hadith from them.

Imam Bukhari narrated same hadith in many places of Sahih Bukhari but at all stages he narrated hadith with a different chain of narration. He always produced thought provoking meanings from them which are the requirement of title. Sometime Imam Bukhari narrated hadith many times with the same chain of narration, but with some special purposes. Allah knows better about that purposes. Here I try to extract some of these purposes which are as under: 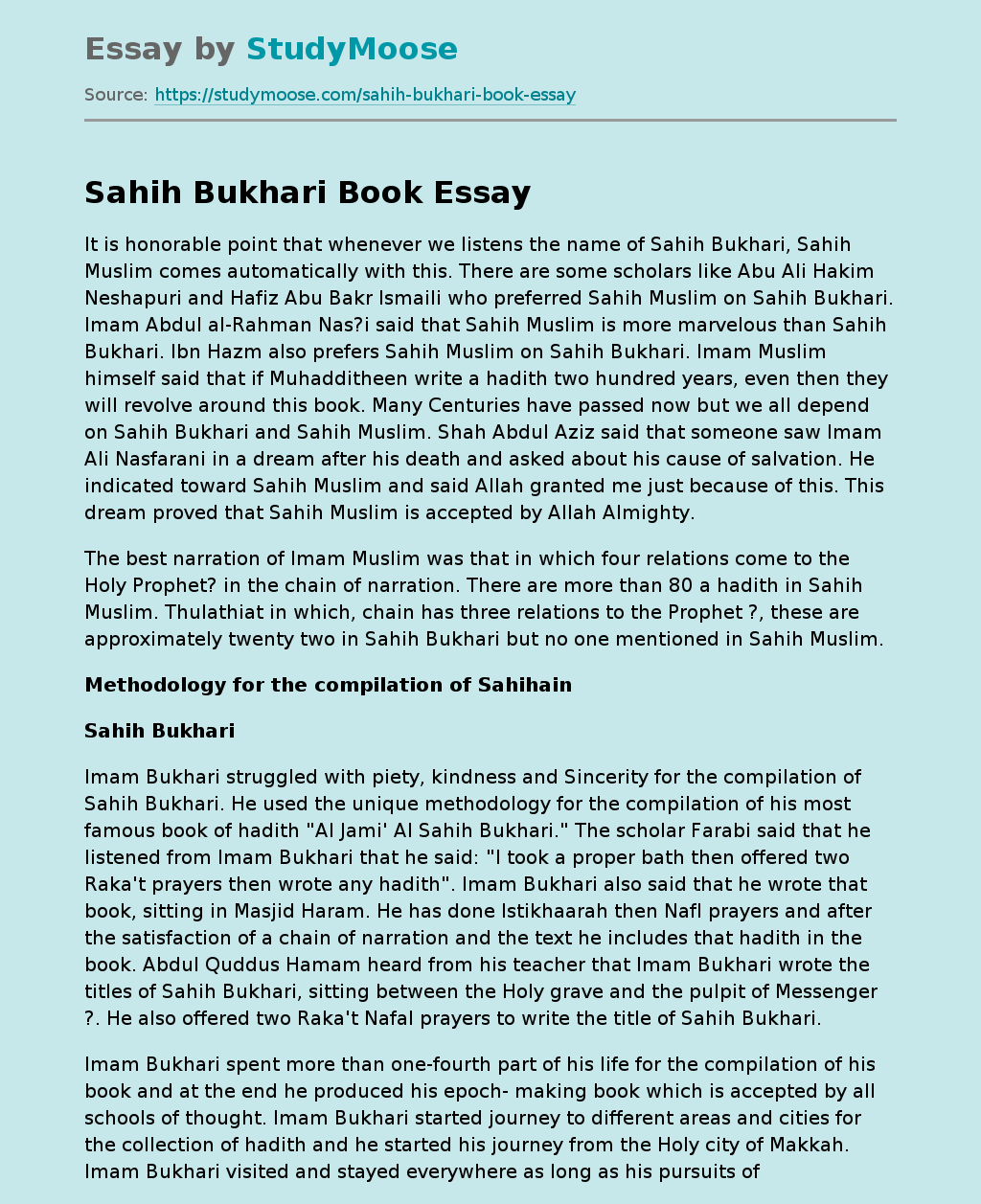