1.1 Safeguarding is protecting vulnerable adults or children from abuse or neglect 1.2 My own role and responsibilities in safeguarding individuals is my duty of care. I have the responsibility to report any signs of neglect or abuse (with the consent of the person) as soon as I suspect anything, even if doubt is present better to be safe. 1.3 Physical abuse:- any non-accidental act or behaviour causing injury, trauma, or other physical suffering or bodily harm. Abusive acts toward the vulnerable can often result from family members mainly feeling they have the right to do so or the stress of the burden they bring Domestic abuse:- any incident or pattern of incidents of controlling, coercive, threatening behaviour, violence or abuse between those aged 16 or over who are, or have been, intimate partners or family members regardless of gender or sexuality.

Don't use plagiarized sources. Get your custom essay on
“ Safeguarding is protecting vulnerable adults or children from abuse or neglect 12 My ”
Get custom paper
NEW! smart matching with writer

The abuse can encompass, but is not limited to psychological, physical, sexual, financial and emotional.Sexual abuse:- also referred to as molestation, is usually undesired sexual behaviour by one person upon another.

It is often perpetrated using force or by taking advantage of another. When force is immediate, of short duration, or infrequent, it is called sexual assault.Emotional/psychological abuse:- is a form of abuse, characterized by a person subjecting or exposing another person to behaviour that may result in psychological trauma, including anxiety, chronic depression, or post-traumatic stress disorder.Financial/material abuse:- which is the illegal or unauthorized use of a person’s property, money, pension book or other valuables (including changing the person’s will to name the abuser as heir), often fraudulently obtaining power of attorney, followed by deprivation of money or other material belongings Modern Slavery:- is the term used within the UK and is defined within the Modern Slavery Act 2015.

Safeguarding is protecting vulnerable adults or children from abuse or neglect 12 My. (2019, Aug 20). Retrieved from https://studymoose.com/safeguarding-is-protecting-vulnerable-adults-or-children-from-abuse-or-neglect-12-my-essay 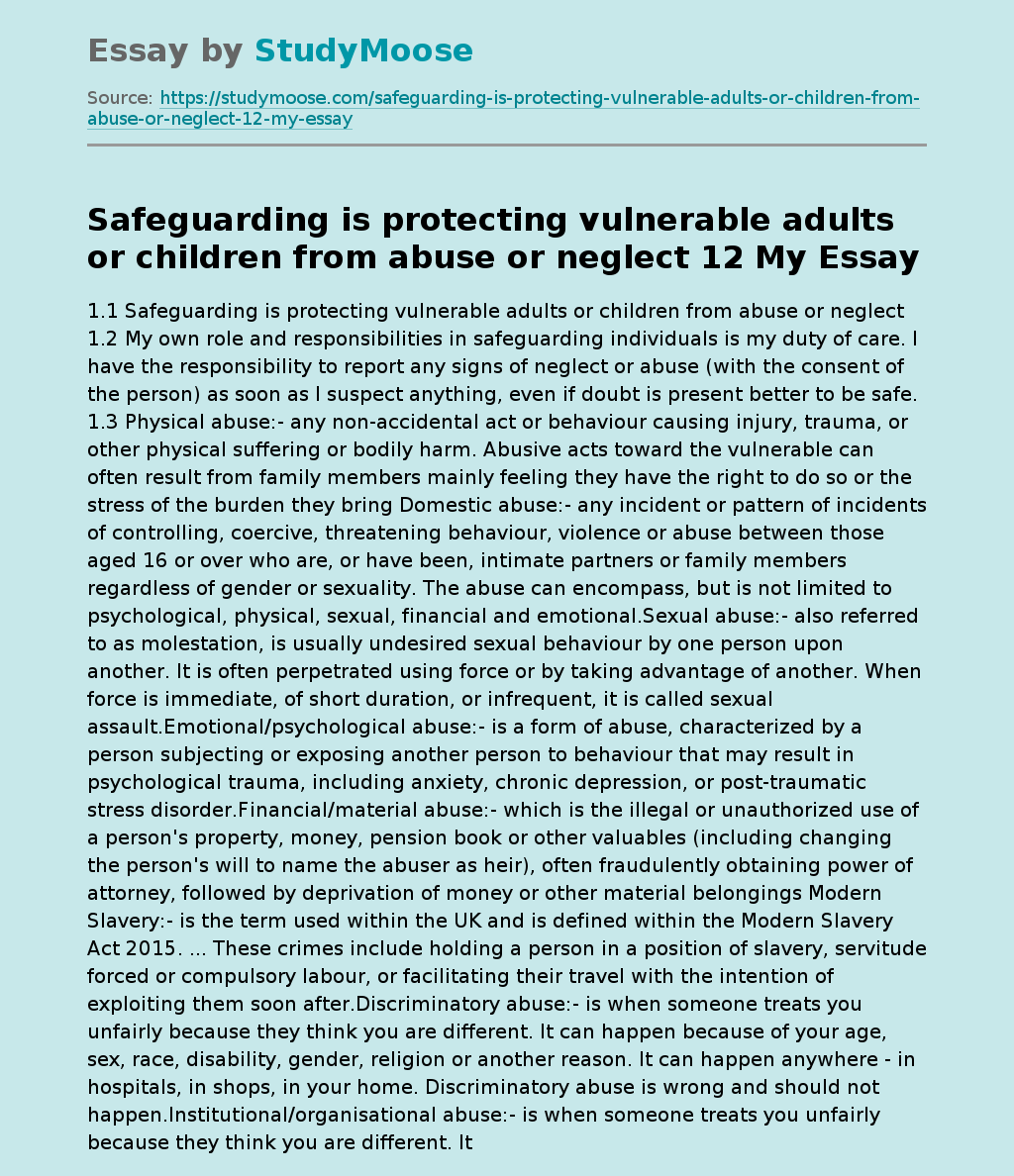