Sacrament of Holy Orders in Christianity

Holy Orders is the sacrament through which the mission entrusted by Christ to his apostles continues to be exercised in the Church until the end of time: thus it is the sacrament of apostolic ministry. It includes three degrees: episcopate(Bishops, presbyterate(Priest), and diaconate(Deacons). It is one of the Sacraments of Vocation — re directed towards the salvation of others; if they contribute as well to personal salvation, it is through service to others that they do so. They confer a particular mission in the Church and serve to build up the People of God.

Turn in your highest-quality paper
Get a qualified writer to help you with
“ Sacrament of Holy Orders in Christianity ”
Get high-quality paper
NEW! AI matching with writer

The priesthood was established by God among the Israelites during their exodusfrom Egypt. God chose the tribe of Levi as priests for the nation. Their primaryduties were the offering of sacrifice and prayer for the people.Christ, in offering Himself up for the sins of all mankind, fulfilled the duties of the OldTestament priesthood once and for all. But just as the Eucharist makes that sacrificepresent to us today, so the New Testament priesthood is a sharing in the eternalpriesthood of Christ.

While all believers are, in some sense, priests, some are set aside to serve the Church as Christ Himself did

WHY IS THIS SACRAMENT CALLED “ORDERS”?

* The word order in Roman antiquity designated an established civil body, especially a governing body. * Ordinatio means incorporation into an ordo (order). In the Church there are established bodies which are ordo episcoporum, the ordo presbyterorum, the ordo diaconorum. Other groups also receive this name of ordo: catechumens, virgins, spouses, widows * Integration into one of these bodies in the Church was accomplished by a rite called ordinatio, a religious and liturgical act which was a consecration, a blessing or a sacrament.

* Today the word “ordination” is reserved for the sacramental act which integrates a man into the order of bishops, presbyters, or deacons, and goes beyond a simple election, designation, delegation, or institution by the community, for it confers a gift of the Holy Spirit that permits the exercise of a “sacred power” (sacra potestas) which can come only from Christ himself through his Church. * Ordination is also called consecratio, for it is a setting apart and an investiture by Christ himself for his Church. The laying on of hands by the bishop, with the consecratory prayer, constitutes the visible sign of this ordination.

THE THREE DEGREES OF THE SACRAMENT OF HOLY ORDERS

Catholic doctrine, the Magisterium, and the constant practice of the Church, recognizes that there are two degrees of ministerial participation in the priesthood of Christ: the episcopacy and the presbyterate.The diaconate is intended to help and serve them. For this reason the term sacerdos in current usage denotes bishops and priests but not deacons. Yet Catholic doctrine teaches that the degrees of priestly participation (episcopate and presbyterate) and the degree of service (diaconate) are all three conferred by a sacramental act called “ordination,” that is, by the sacrament of Holy Orders

The 3 Major or “Sacred” Orders:

* Bishops: The First Degree of the Priesthood:

Bishops have the greatest authority and jurisdiction (aside from Popes and Patriarchs), and have the powers to ordain men into the diaconate and priesthood, and to offer the Sacrament of Confirmation (this last power they can delegate to a priest), to dedicate churches and altars, to consecrate chalices and patens and bells, and to preside at the benediction of abbots. They are said to exercise the fullness of the priesthood. The symbol of this office is the mitre.

* Priests: The Second Degree of the Priesthood

The duties and powers of the priest are to confect the Eucharist at the Mass; offer the Sacraments of Penance, Communion, and Unction; to preside at the Sacrament of Holy Matrimony; to solemnly baptize; to preach; to teach, guide, and sanctify his sheep. With ordination to the priesthood, a man has received the fullness of the Sacrament of Order. The symbols of this office are the stole, the chasuble, a paten with bread on it, and a Chalice filled with wine.

The duties of the deacon are to handle the sacred vessels, to be of service to the priests and Bishops (inside and outside of the liturgy), to read the Epistle and Gospel at the Mass, to be general stewards, and to serve the widows and orphans. This Order is Sacramental, and the first of the three divinely-instituted grades of the hierarchy of Orders, the others being the priesthood and the episcopate. The symbols of this office are the dalmatic, the stole (worn over the left shoulder, as opposed to around the neck as priests wear them, and under the dalmatic), and the Book of the Gospels.

The duties of a subdeacon are to serve the deacon at Mass; to prepare the bread, wine, and sacred vessels for the Sacrifice; to present the chalice and paten at the Offertory, and pour water into the wine for the Eucharist; to chant the Epistle; and to wash the sacred linens. This office is non-sacramental, but it is now that the vow of celibacy is taken. The symbols of this order are the empty Chalice and the paten, basin and towel, two little cruets, and the book of epistles.

The duties of the acolyte are to light the Altar candles, carry the candles in procession, prepare the water and wine for the Mass, and assist the priest during the Mass. The symbols of this order are the candle, the cruet, and a linen bag. (Note that altar boys are sometimes designated “acolytes” and fulfill the duties of the acolyte during the Mass.)

In the early Church, the duty of the exorcist was to cast out demons. Now that duty belongs to the priest alone, but this minor order is kept in traditional priestly societies nonetheless. The symbol for this order is the book containing the Rite of Exorcism.

The duty of the lector is to chant the Epistle when Mass is sung without a deacon and subdeacon. The symbol of this order is the Book of the Epistles.

The duties of the porter are to ring the bells, to open the church and sacristy, and to open the book for the priest. Most of these duties have passed to the laity, such as sacristans, etc., but in traditional priestly orders, this clerical order is kept as an office and stepping-stone toward the priesthood. The symbol for this order is keys.

FORM and MATTER of the SACRAMENT

The importance of the ordination of the bishop, priests and deacons if for the life of the particular Church thus, its celebration calls for as many of the faithful as possible to take part. * It should take place preferably on Sunday, in the cathedral, with solemnity appropriate to the occasion. All three ordinations, of the bishop, of the priest, and of the deacon, follow the same movement. Their proper place is within the Eucharistic liturgy.

* The essential rite of the sacrament of Holy Orders for all three degrees consists in the bishop’s imposition of hands on the head of the ordinand and in the bishop’s specific consecratory prayer asking God for the outpouring of the Holy Spirit and his gifts proper to the ministry to which the candidate is being ordained. * As in all the sacraments additional rites surround the celebration. * The rites have in common the expression of the multiple aspects of sacramental grace. Thus in the Latin Church, the initial rites:

MINISTER of the SACRAMENT

WHO CAN RECEIVE THIS SACRAMENT?

* “Only a baptized man (vir) validly receives sacred ordination. * No one has a right to receive the sacrament of Holy Orders. Indeed no one claims this office for himself; he is called to it by God. * Anyone who thinks he recognizes the signs of God’s call to the ordained ministry must humbly submit his desire to the authority of the Church, who has the responsibility and right to call someone to receive orders. Like every grace this sacrament can be received only as an unmerited gift. * All the ordained ministers of the Latin Church, with the exception of permanent deacons, are normally chosen from among men of faith who live a celibate life and who intend to remain celibate “for the sake of the kingdom of heaven.”

EFFECT of the SACRAMENT

* An Increase of sanctifying grace

* As the duties of God’s ministers are manifold and onerous, it is in perfect accord with the rulings of God’s Providence to confer a special grace on His ministers. The dispensation of sacraments requires grace, and the rightful discharge of sacred offices presupposes a special degree of spiritual excellence. * Each level of ordination confers special graces, from the ability to preach, granted to deacons; to the ability to act in the person of Christ to offer the Mass, granted to priests; to a special grace of strength, granted to bishops, which allows him to teach and lead his flock, even to the point of dying as Christ did.

* The Character – A spiritual indelible mark impressed upon the soul

* The sacramental character of order distinguishes the ordained from the laity. It gives the recipient in the diaconate, e.g., the power to minister officially, in the priesthood, the power to offer the Sacrifice and dispense the sacraments, in the episcopate the power to ordain new priests and to confirm the faithful. * Once a man has been ordained, he is spiritually changed, which is the origin of the saying, “Once a priest, always a priest.” He can be dispensed of his obligations as a priest (or even forbidden to act as a priest); but he remains a priest forever.

Sacrament of Holy Orders in Christianity. (2017, Jan 09). Retrieved from https://studymoose.com/sacrament-of-holy-orders-in-christianity-essay 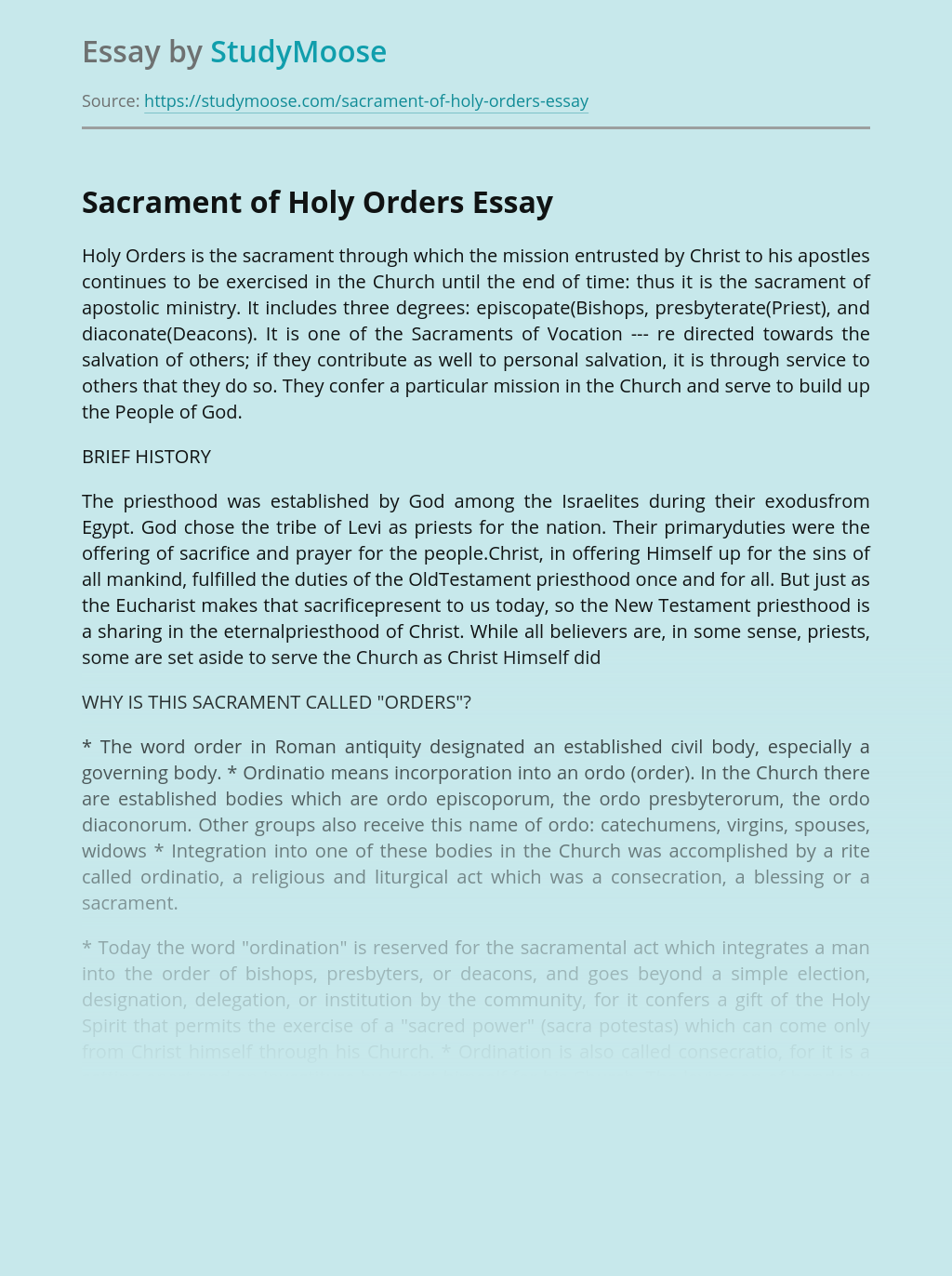 Turn in your highest-quality paper
Get a qualified writer to help you with
“ Sacrament of Holy Orders in Christianity ”
Get high-quality paper
Helping students since 2015
Stay Safe, Stay Original