Sachin Ramesh Tendulkar (Listeni/ˌsətʃɪn tɛnˈduːlkər/; born 24 April 1973) is a former Indian cricketer widely acknowledged as one of the greatest batsmen of all time, popularly holding the title “God of Cricket” among his fans. Some commentators, such as former West Indian batsman Brian Lara, have labelled Tendulkar the greatest cricketer of all time. He took up cricket at the age of eleven, made his Test debut against Pakistan at the age of sixteen, and went on to represent Mumbai domestically and India internationally for close to twenty-four years.

Turn in your highest-quality paper
Get a qualified writer to help you with
“ Sachin Tendulkar: Indian Sport Legend ”
Get high-quality paper
NEW! AI matching with writers

Later in his career, Tendulkar was a part of the Indian team that won the 2011 World Cup, his first win in six World Cup appearances for India. He had previously been named “Player of the Tournament” at the 2003 edition of the tournament, held in South Africa. In 2013, he was the only Indian cricketer included in an all-time Test World XI named to mark the 150th anniversary of Wisden Cricketers’ Almanack.

Tendulkar received the Arjuna Award in 1994 for his outstanding sporting achievement, the Rajiv Gandhi Khel Ratna award in 1997, India’s highest sporting honour, and the Padma Shri and Padma Vibhushan awards in 1999 and 2008, respectively, India’s fourth and second highest civilian awards. After a few hours of his final match on 16 November 2013, the Prime Minister’s Office announced the decision to award him the Bharat Ratna, India’s highest civilian award. He is the youngest recipient to date and the first ever sportsperson to receive the award. He also won the 2010 Sir Garfield Sobers Trophy for cricketer of the year at the ICC awards. In 2012, Tendulkar was nominated to the Rajya Sabha, the upper house of the Parliament of India. He was also the first sportsperson and the first person without an aviation background to be awarded the honorary rank of group captain by the Indian Air Force. In 2012, he was named an Honorary Member of the Order of Australia.

In December 2012, Tendulkar announced his retirement from ODIs. He retired from Twenty20 cricket in October 2013 and subsequently announced his retirement from all forms of cricket, retiring on 16 November 2013 after playing his 200th and final Test match, against the West Indies in Mumbai’s Wankhede Stadium. Tendulkar played 664 international cricket matches in total, scoring 34,357 runs. 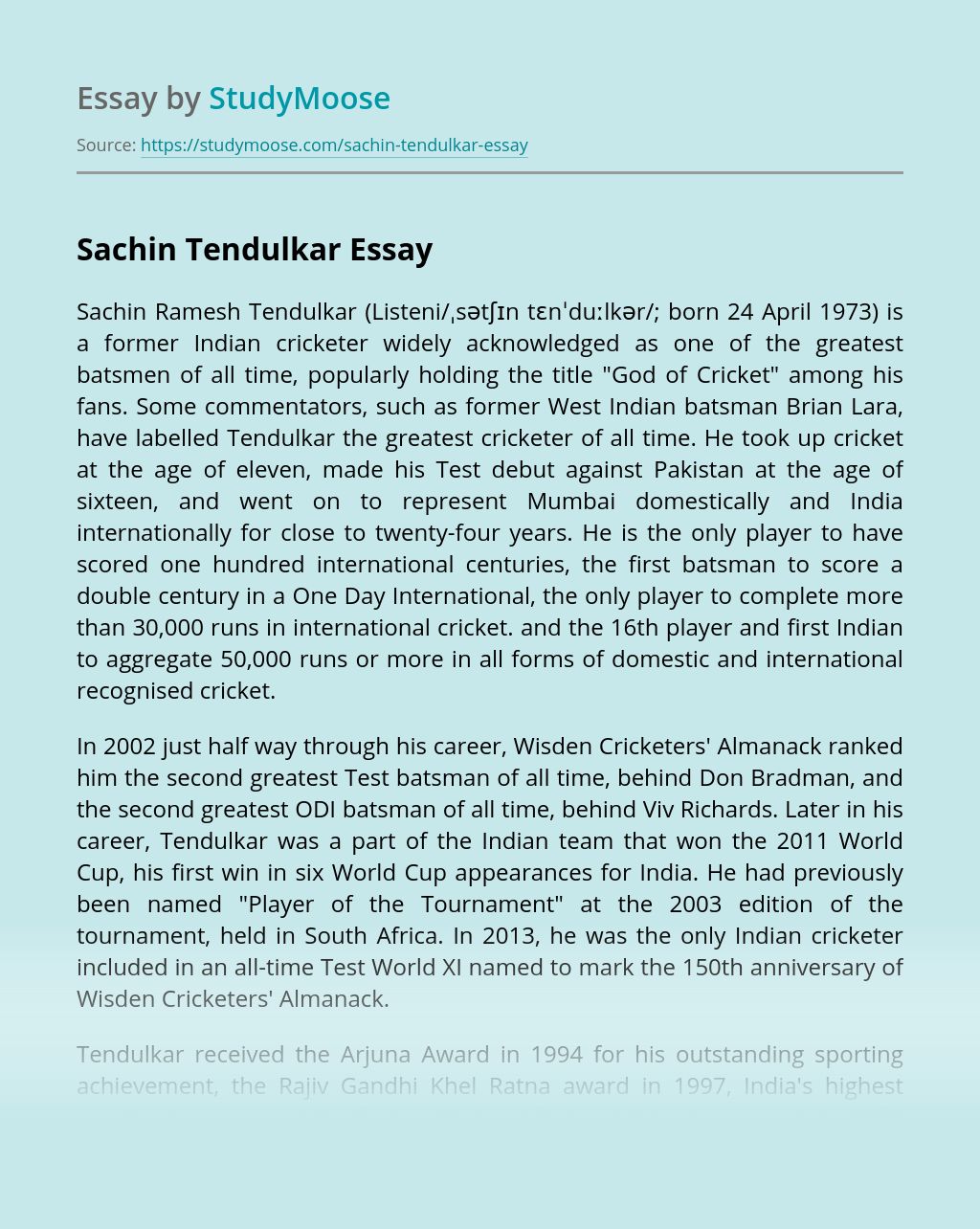 Turn in your highest-quality paper
Get a qualified writer to help you with
“ Sachin Tendulkar: Indian Sport Legend ”
Get high-quality paper
Helping students since 2015
Stay Safe, Stay Original