In this paper, I’m going to discuss the argument that the famous American anthropologist, Ruth Benedict, has put forth regarding ‘ethical relativism’. Ethical relativism is the theory that holds that morality is relative to the norms and values of one’s culture or society. That is, whether an action is classified as right or wrong depends on the moral norms of the society in which it is practiced. The same action may be morally right in one society but be morally wrong in another.

Don't use plagiarized sources. Get your custom essay on
“ Ruth Benedict: Ethics Are Relative ”
Get custom paper
NEW! smart matching with writer

For the ethical relativist, there are no universal moral standards — standards that can be universally applied to all peoples at all times.

The only moral standards against which a society’s practices can be judged are its own. If ethical relativism is correct, there can be no common framework for resolving moral disputes or for reaching agreement on ethical matters among members of different societies. In my opinion, morality is culturally relative and completely reliant on the societal pressures and surroundings you have been brought up with, and it plays an integral part on your conception of ethics and morals.

In ‘Ethics Are Relative’, Ruth Benedict asserts morals are culturally defined based on what is considered appropriate behavior in the society.

To illustrate her point, Benedict utilizes the examples of homosexuality and murder, which are regarded to many in our society as immoral and even wrong to a certain extent. For example, Benedict states homosexuality in ancient Greece, was widely accepted and did not have any negative associations with it.

Benedict also states in the culture of the Kwakiutl, a culture which has been without contact to and thus has remained uninfluenced by our “standardized worldwide civilization,” the death of a loved one (no matter if the person has died of accident or natural causes) is considered an “insult” which is to be dealt with by committing murder.

According to Benedict, each of these examples demonstrates how what is considered immoral in one society is considered moral in another. Benedict’s argument is: (1) If what is accepted by society, based on shared beliefs, as normal behavior varies from culture to culture, then morality would vary from culture to culture. (2) Each culture, based on shared beliefs, decides what is considered acceptable and normal behavior within their society. (3) Therefore, morality is relative to the culture.

If Benedict’s argument is true, it would mean that morality exists solely as a creation of individual society’s. Since morality is not an independent, higher concept outside of societal inclinations, it would be able to be changed by society. Therefore, since morality can change at any time, morality fails to exist in reality except on a superficial level, which makes morality meaningless. Why follow any “moral” action in society then? Just get a majority of people in the society to act conversely to the “moral” action also, and then the converse action will become “normal” and thus “moral.

Consequently, the question remains, just because an action is “normal,” does it make the action “moral? ” Benedict states in Ethics Are Relative, “We recognize that morality differs in every society, and is a convenient term for socially approved habits. ” One thing she doesn’t end up answering in her essay is that, just because it becomes a habit, does this make it right? There have been times, when I looked up in the sky and wondered, ‘ Oh GOD, is this ethical? What will the society think of me? ’

Overall, I think that the analysis that Benedict has come up with is pretty reasonable and it’s laid out in a way that makes us reason with ourselves to come to a conclusion based on morality. I make this statement of agreeing with Benedict based on a personal experience proving the clear thesis of Benedict’s argument. Last summer, I had visited Thailand and I learned that the norms in Thailand, are that when a couple gets married, the man moves in with the woman and her parents rather than where all around the world it’s the woman who leaves her house and joins the man in his routine.

Normally as we would say, relative to our societies, that the son of the house would take care of the parents in their old age, whereas in Thailand it’s the daughter of the house that takes care of her parents all throughout her life. These incidents made me believe and lead to a conclusion that every culture is based on their own set of rules, and regulations which they prefer to follow and are more easily adapted to people who follow the same rules and regulation of certain ways of leading their lives. 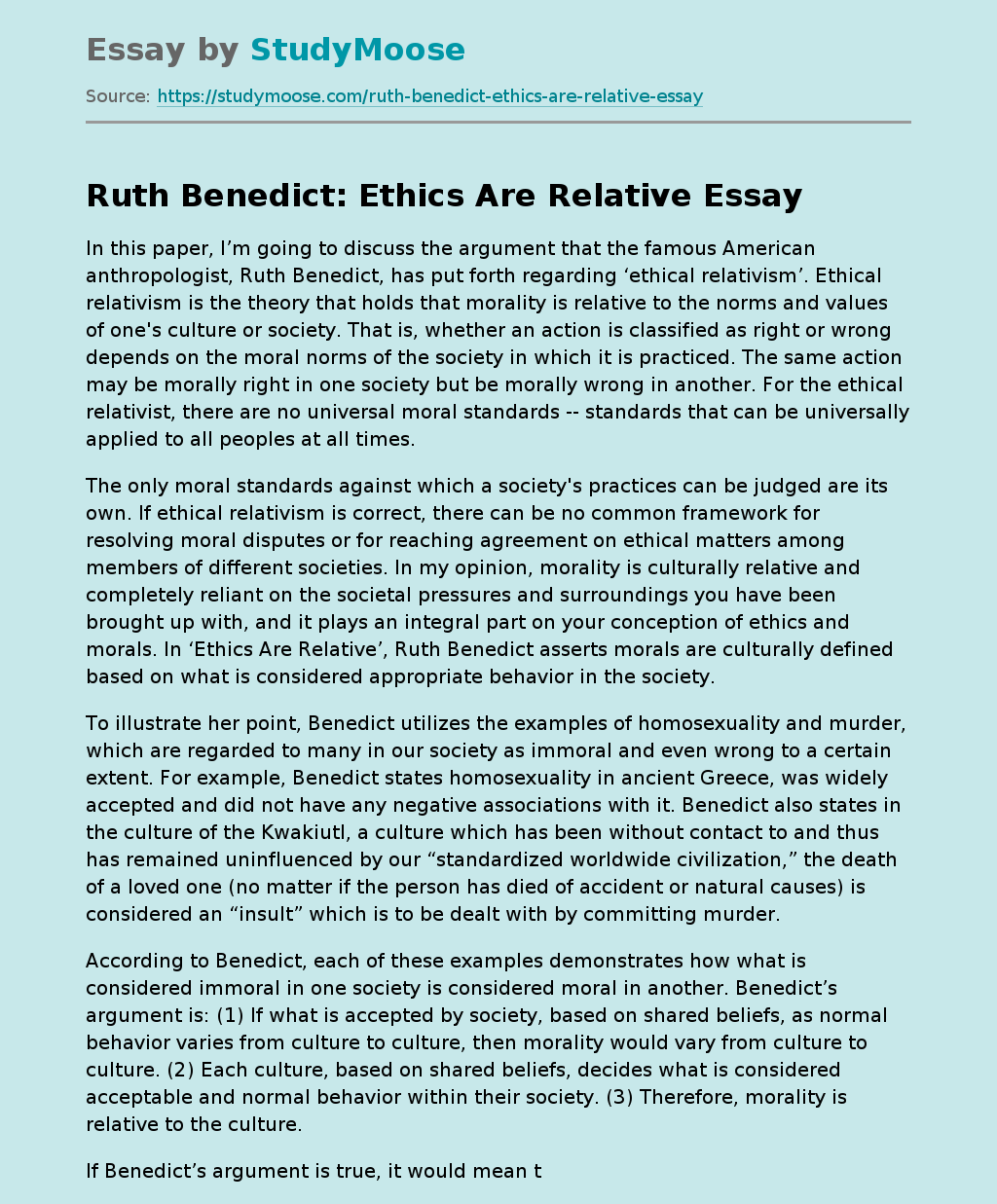