Russia tea market Russia Most of Northern European Russia and Siberia has a subarctic climate, with extremely severe winters in the inner regions of Northeast Siberia (mostly the Sakha Republic, where the Northern Pole of Cold is located with the record low temperature of ? 71. 2 °C/? 96. 2 °F), and more moderate elsewhere. The strip of land along the shore of the Arctic Ocean, as well as the Russian Arctic islands, have a polar climate. Throughout much of the territory there are only two distinct seasons—winter and summer; spring and autumn are usually brief periods of change between extremely low temperatures and extremely high.

Don't use plagiarized sources. Get your custom essay on
“ Russia Tea Market ”
Get custom paper
NEW! smart matching with writer

The coldest month is January (February on the coastline), the warmest usually is July. Great ranges of temperature are typical. In winter, temperatures get colder both from south to north and from west to east. Summers can be quite hot, even in Siberia. The continental interiors are the driest areas. The tea market continues to develop The annual volume of the Russian tea market in 2002 has grown.

The source of the growth is the increase of the population income and number of the tea factories in Russia, improvements in the production and logistics functions, development of the retail chains. The tea production in Russia grows For the last several years there has been a stable growth of the bulk tea import to Russia. After the tariff rates for the import of the bulk and packed tea had been differentiated it became more profitable to carry out the secondary processing and packing of the bulk tea on the territory of the Russian Federation.

This led to the dramatic change in the import structure – the share of the bulk tea import increased from 30% in 1998 to 68% in 2002. The state investment policy triggered the intensive development of the tea production capacities in Russia and facilitated the present situation when all the major tea market operators have their own packaging factories in Russia. Orimi Trade started to operate its tea factory located in Leningrad Oblast in the year 2000. Accordingly to the opinion of the industry experts the tea factory “Nevskiye Porogi” is one of the most up-to-date tea packaging factories in Europe.

The tea from Ceylon instead of Indian tea India has for long time played the leading role in the structure of the tea import to Russia. After the cancellation of the state benefits in the form of the tax concessions for the goods imported from India the share of the Indian tea in the overall import volume decreased. In the new market reality Indian tea lost the competition to the tea from Ceylon which proved to have better price/quality ratio and took second place in terms of volume on the Russian market.

In the year 2000 the market share of Indian tea amounted to 71% but it has been decreasing ever since. In 2001 India still remained the major supplier of tea to Russia with the share of 50% in the overall import mix. 2002 totals show that Ceylon tea has 39% share of all tea import while Indian tea has only 33 %. The Russians prefer to drink tea The average annual per capita tea consumption in Russia is 1 kg. Around 95% of the Russians drink tea. The tea is drunk mainly hot that is why it is a seasonal product with the consumption rate peaks in winter months.

The average hot beverages per capita consumption mix in Russia is the following: the average Russian drinks 3 cups of hot beverages daily, half of the population drink daily two cups of tea and one cup of coffee. Brand loyalty When buying tea the Russian consumer first of all pays attention to the brand name. 86% of those who buy tea limit their choice to 3 brands. Around 70% of tea buyers demonstrate the persistent loyalty to the brand. During the last half a year around 21% of them has refused from the previously bought brand.

The most commonly mentioned reasons for switching to another brand are the following: change or worsening of the tea flavour or ability to buy a more expensive product. The consumption of tea bags grows As to the tea bags segment Russia repeats the pattern of the European tea market. We consume more tea bags with every year. In 2002 the share of tea bags on the Russian market has increased from 7% to 12%. Accordingly to the industry experts this growth will continue in the future (for comparison purposes, the share of tea bags on the tea market of Great Britain today amounts to 90%).

The increase of the tea bag sales is by many explained not only with the increased population income but also with the influence of the Russian producers on this market. The tea in tea bags becomes cheaper and more tasty as the national producers understand better than anyone else the high requirements to tea quality put forward by the Russian consumers. Thus for the production of the tea bags they choose the grades that are not worse than traditional leaf grades in terms of flavour and aroma. World market

Tea is supplied to the world market mostly by India (up to 1 million tons), Sri Lanka (more than 200,000 tons), Indonesia (160,000 tons), China, Kenya, Bangladesh and Zimbabwe. In Russia, the Indian and Ceylon teas are most familiar. Speaking of the problems facing the industry, CEO of the Nikitin company Alexander Dubov named inflexible customs duty rates that are not adjusted in line with the market and lobbying efforts on the part of “certain Western companies” which want the World Trade Organization to revise its present duty rates, which equal 20 percent on packed teas and 5 percent on bulk teas.

Some of them, however, are experiencing production declines, caused sometimes by their inconvenient locations. The structure of freight traffic is such that Moscow and St. Petersburg factories have no problems delivering their produce to the provinces, while the factories located in the regions do have problems with distribution. This is precisely what caused the Irkutsk tea factory to shut down and this is why new tea factories are built mostly around Moscow and St. Petersburg. As regards domestically grown tea, it is processed and packed mainly at the Adler and Dagomys tea factories (Krasnodar Krai).

Although Krasnodar tea has a delicious taste, it is extremely climate-sensitive and requires very careful handling on transportation, processing or blending. The same is true of teas grown in Georgia and Azerbaijan. Tea consumption in Russia According to the independent market and media research company Comcon, the following brands top the list of consumer preferences in Russia: Maisky Chai Brook Bond Dilmah Princess Gita and Lipton Closely followed by the other brands. The ratings differ by small percentages, which again testify to strong competition on the market. Gallup Media Russia reports that 98. percent of Russians drink tea and, according to state statistics, per capita tea consumption in Russia equals 1. 5 kilogram per person per year, while in Great Britain the corresponding figure is 2. 5 kilograms. This indicates that Russia’s tea market has the potential to develop. Tea is the only product the consumption of which is higher in the provinces than in the big cities. The leaders in terms of per capita consumption of tea in Russia are the northern lands, Siberia and the Caucasus. “Russia’s tea industry will develop,” senior manager of the Milford company Sergei Kramarenko said. However, there are some problems that may negatively affect the tempo of its development. The most serious problem is that of quality: Many well-known, though dishonest, companies practice blending premium brands with cheaper ones and selling the mixtures as premium brands. Naturally, these companies show higher cost efficiencies, but this is achieved at the expense of quality. Such dishonest methods of competition undermine both the market and consumer confidence. ” Demand on the market is increasing, even for exclusive brands, and so does the rating of preferences for teabags (15 percent).

In addition to the factor of convenience, the increased demand for teabags has resulted from massive promotional campaigns organized by such gigantic companies as Douwe Egberts and Unilever. Aware of the trend, Russian companies have rushed to produce tea bags and invest in brand advertising. They can save on advertising tea bags as a product – their competitors are doing that for them. Other trends on the market include increased consumption of green teas, herbal teas and flavored teas. Of the last category, most popular are teas with bergamot and lemon.

Not very long ago this segment of the market was fully controlled by foreign companies, but now domestic companies are gradually breaking in. RUSSIA: TEA MARKET IS CONSOLIDATED Russian tea market is distinguished by a high degree of consolidation: seven leaders, i. e. «Avalon», «Akbar», «Akhmad», «Grand», «Dilmah», «Orimi Trade» and Unilever (enumerated in alphabetic order), controlled over 80% in natural terms in 2006, according to «Nielsen Russia». A general trend of increase in demand for more expensive and qualitative products is typical of tea market. Scented teas remain the most popular, i. . over 30% of sales fell to them last year. This segment along with the green teas segment shows the highest growth rates on the market. RUSSIA: COLD TEA MARKET IS 19 MILLION DOLLARS According to the data of “Business analyst”, the cold tea segment remains to be one of the most fast-growing in the market of soft drinks. The total volume of cold teas consumption in Russia reached in 2006 18-19 million dollars, which is higher by 55% as against 2005. High competition level is showed by the market now. 96. 2% of the cold tea market in value terms fell in 2006 on three main brands.

RUSSIA: TEA DEMAND INCREASED BY 1. 5% IN 2006 According to estimates of Discovery Research Group, the Russian tea market volume is 160-220 thousand t, in 2005 it was 170 thousand t. This figure is estimated in value terms as 1-1. 2 billion USD. The tea demand in Russia increased in 2006 1. 5% in comparison with 2005. The market volume in money terms increased by 15. 7%. The low rate of growth of the market, 90% of sales whereof falls on black tea, is associated by experts with the balance in tea and coffee consumption in Russia. The tea import grew by 8. % during the last five years. Supplies from India decrease and the same from Sri Lanka, China, Vietnam increases. RUSSIA: TEA SALES PATTERN BY POINTS OF SALE According to ACNielsen research company, tea sales pattern by points of sale looked within the period from December, 2005 to May, 2006 as follows: point of sale /portion / change in comparison with similar previous period. Supermarkets and minimarkets / 32. 3% / + 4. 8% Grocery stores / 31. 1% / — 3. 9% Stalls and pavilions / 2. 4% / + 0. 1% Open markets / 34. 2% / — 1%. RUSSIA: TEA WILL BE PROMOTED AMONG THE YOUNG PEOPLE

The yearly consumption of tea in Russia is equal to 170 thousand tons, per capita — 1 kg a year. By the consumption of tea Russia occupies the third place in the world, after China and India. The volume of Russian tea market is evaluated as being equal to US$ 1 billion. . . RUSSIA: TEA FROM SRI LANKA OCCUPIES 42% OF MARKET In accordance with the data of the association “Roschaikofe”, the leaders between the tea suppliers to the Russian market are:Sri Lanka — 42. 8% of market, India — 25. 6%, Indonesia — 10%. Less than 10% of market are occupied by: China — 6. 8%,Kenia — 5. 7% and Vietnam — 3. 5%. For the other countries remains 5. 6%. 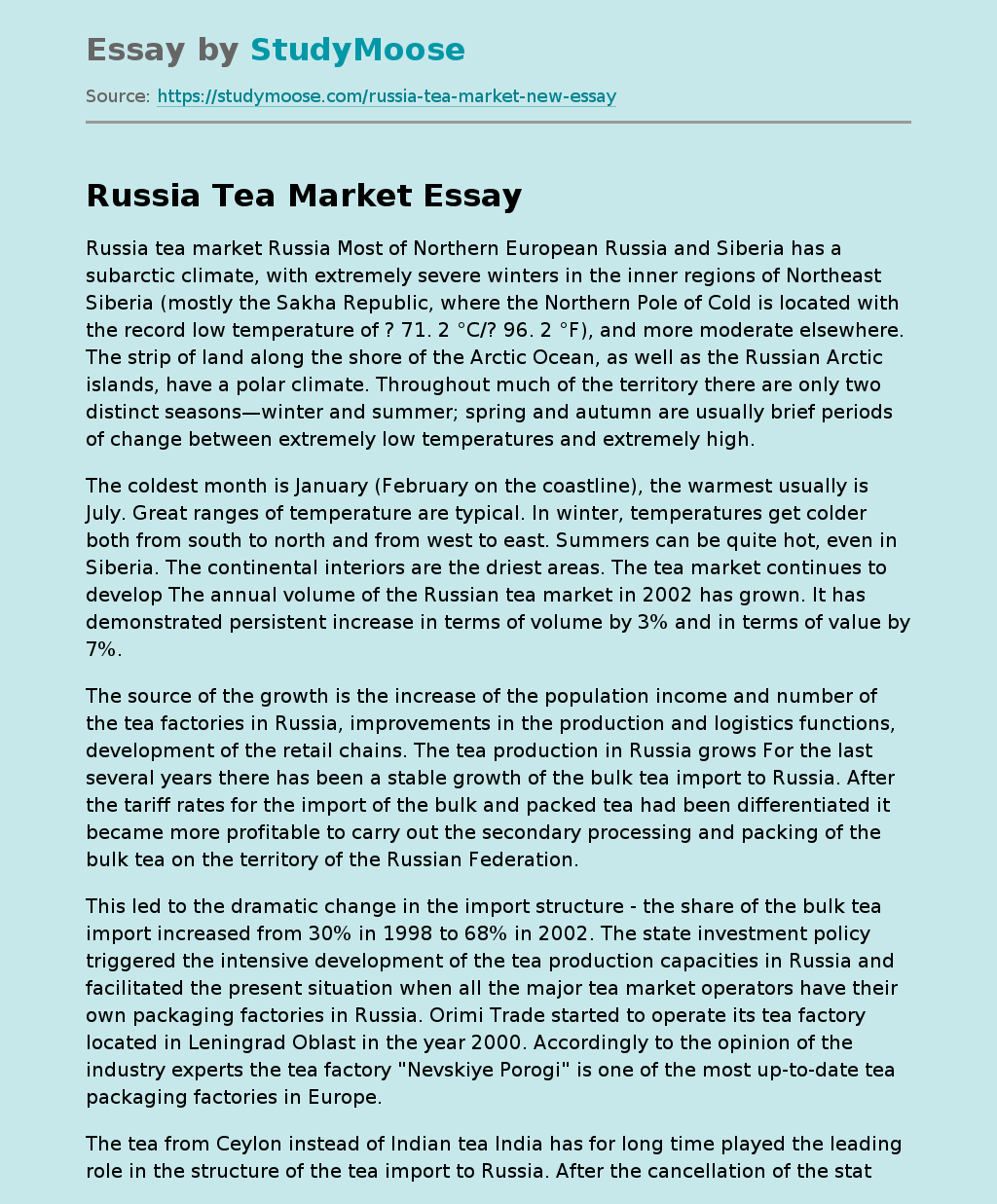