Imagine reading a book and not being able to portray the image, it would basically be whole lot of jumbled letters on a piece of paper that aren’t creating any meaning. The use of visual images can assist people to understand the true meaning of a novel or movie; they play a vital role in any story. Distinctively visual texts aim to influence the way we interpret the images we see. Critically affecting the way we make interpretations of the experiences we encounter in the world.

Don't use plagiarized sources. Get your custom essay on
“ “Run, Lola, Run” ”
Get custom paper
NEW! smart matching with writer

The distinctively visual represented in Run Lola Run by Tom Tykwer and the digital novel named inanimate Alice are very similar when it comes to the powerful images created within the text. Powerful images challenge our understanding of ourselves and our world in many methods these images help to create a story and ad in depth meaning to the text. The 1998 film ‘Run Lola Run’ directed by Tom Tykwer uses visual techniques to convey messages to the audience and involve the audience in the experiences that the images create.

The using of many influential techniques

The use of many influential techniques create distinctively visual images that are both impressive, unique and challenge our initial thought of the film, they therefor create powerful images in connection with the film. With the use of techniques such as constant motifs, music techniques, animation and camera techniques, Tykwer explores and conveys ideas about love, chance and the importance of time. To enhance these themes Tykwer portrays distinctively visual images of Lola running, the red filter scenes, animated sequences and the split screens.

The major theme in the film is time as time governs the actions and outcomes of Lola throughout the film. The importance of time is represented through the closes up shots of the pendulum, grandfather clock and the cuckoo clock in the opening scenes. This constant motif metaphor of the clock prepares us to what will happen in the movie and shows us the amount of pressure lola is under to save her beloved boyfriend manni. In the beginning of the film you see an animation of Lola being swallowed by a giant clock. This shows Lola being swallowed by the giant clock is symbolic of time being more powerful than she is.

This demonstration the importance of time and that time is ticking away as Lola only has 20 minutes to work out how she is going to help Manni find the money for him. Throughout the film you are constantly reminded of the colour red, once again the colour red is another powerful visual motif which adds meaning and challenges our understanding of the film. The colour red suggests a sense of passion and freedom from Lola’s vivid hair. The colour of Lola’s hair makes her stand out as the protagonist of the film, as well as symbolising her attitude of rebelliousness towards authority and her egoism.

The editing in RLR is fast paced and significant in many ways. Tykwer has used several editing techniques to help the audience engage with the powerful shots that are exposed within the film. When Lola is trying to figure out who to approach for the money the fast paced flashing in of different faces, combined with the rotating camera emphasises on how images play a vital role in telling the story. By the use of these camera techniques and the importance of the sound techniques it helps engage the audience with the story and once again challenges our thought of the film.

My second chosen text is inanimate Alice which is a digital novel that tries to encourage the younger, hands on generation. Inanimate Alice is an interactive multimedia story which tells a story about A young girl who grows up to become a videogame designer, the story takes place in China when Alice is eight years old. As we follow Alice through these episodes we discover how complex the narrative becomes. This digital novel shows exactly how images add a vital role to the coming together of the final story.

The combination of images, sound, text, puzzles and games illustrate and enhance the narrative. In episode one, we discover many different techniques that help the binding of the story. The use of juxtaposition between the brightly coloured flowers and the dark, dull grainy colour of the road they are traveling shows how the effect of powerful images can tell the story and how it challenges the understanding of the world around us. These dominant images give us the mental picture of what’s going on in the digital novel and makes it easier for one to understand.

To challenge our thought on the novel director Kate Pullinger uses the variety of different music and sound techniques. As each slide is played to us the music and sound changes and gets more and more complex which helps ad to the importance of the telling of the story. The music is either upbeat, sad, or tense which this adds to the effect and makes you feel like you are a part of the story. With the arrangement of music and the constant split screen effect, pullinger is able to create a power story with meaning and emotion.

Ultimately in conclusion Tom Tykwer and Kate Pullinger use a wide variation of techniques to convey the final outlook of the story. With the use of camera techniques, split screens, interactive multimedia, motifs, metaphors and juxtaposition this therefore helps to creates meaning and challenges our understanding of ourselves and our world. Finally distinctively visual texts are texts that allow the audience to create an image within their mind, by using an array of language and visual techniques and I believe strongly that this is showed in run Lola run and inanimate Alice 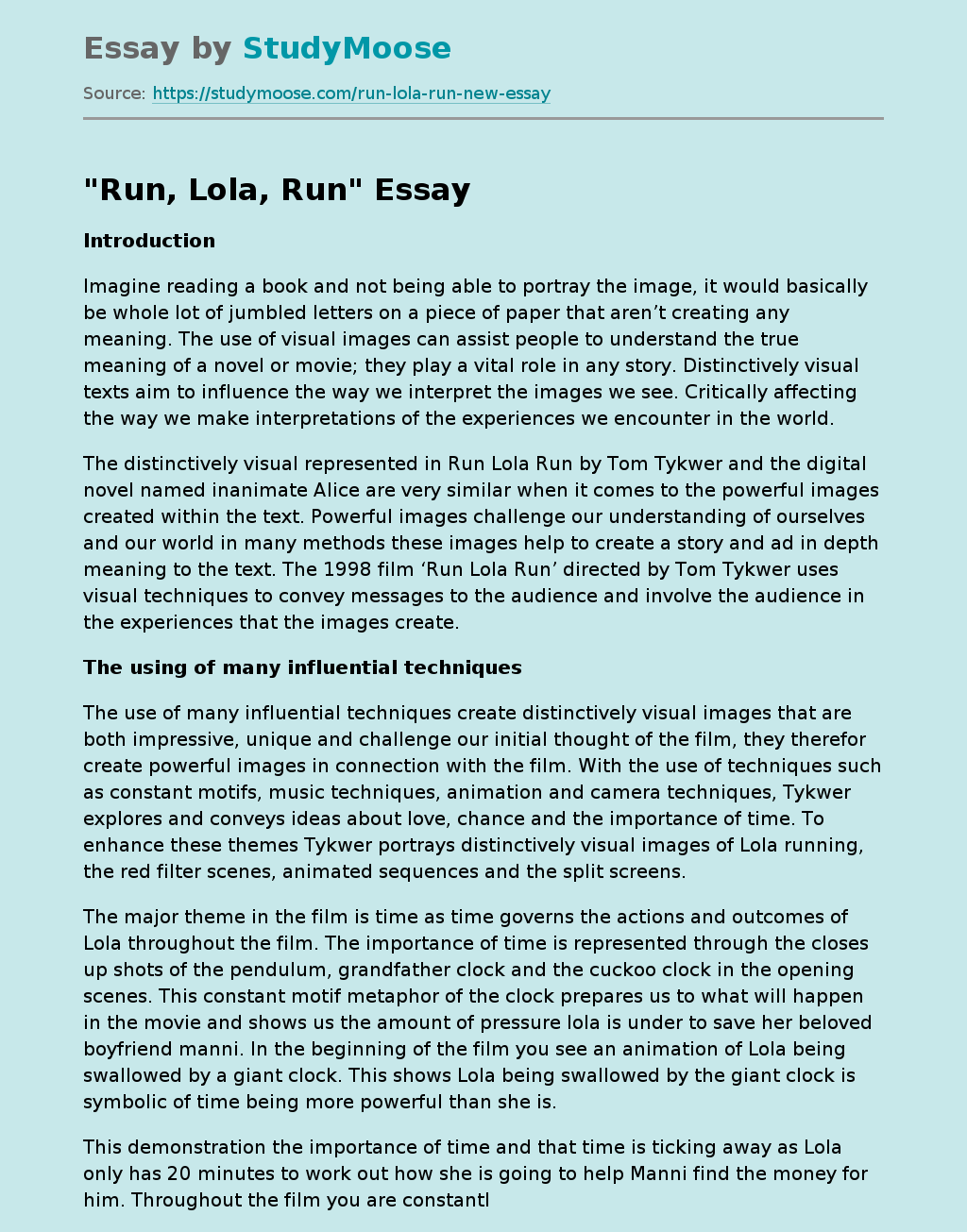