A distinctively visual text aims to influence the way we discover and understand the images we see. Significantly altering the way we make understandings of the experiences that we encounter in the world. Techniques used to portray Distinctively visual are applied in the film ‘Run Lola Run’ directed by Tom Tykwer and the picture book ‘Red Tree’ written by Shaun Tan through the use of motifs, colours, lighting and reading paths. The use of these techniques help to highlight the important themes in both texts such as love, hope and time.

The film Run Lola Run presents visual images and reflects the power of post modernism. Tykwer has included in the film a range of themes and ideas, which symbolise the cultural background such as chance versus freewill. The colour red appears right throughout the film, as a motif representative of different sentiments and thoughts dominant to the film’s essential message. Red suggests a sense of liberty and desire typically by Lola’s vibrant hair.

The colour of Lola’s hair makes her unique as the character in the film, as well as symbolising her attitude of disobedience towards authority and her individuality.

Another motif is circles and spirals in the film, they have been incorporated throughout the film, from the various extreme close ups of clocks to the logos upon buildings. Examples of these are the Bolle sign on the wall behind the phone booth where Manni waits for Lola and the spinning spiral at the Spirale Bar. These circles all represents the film’s dominant message that life is circular and cynical; beginnings are the end of which came previous and endings are the new beginnings.

The image of the spiral is used in the film to represent misperception and worry.

In ‘Run Lola Run’ time is shown to be a major concern right from the beginning. We can see this in the first few seconds of the film when there is a low angle shot looking up at a pendulum swaying then the camera pans out to show us a gargoyles head for a clock. The gargoyle opens its mouth and starts to consume everything including us. This shows that early in the film the use of the camerawork helps to portray that time is overwhelming and uncontainable which is linked directly to the predicament that Lola is in where she only has twenty minutes to save her boyfriend Manni and no matter what she does she can’t alter the time she has. This major event is the whole significance for the film ‘Run Lola Run’.

The use of split screen image is continuously reappearing in the film. This is shown in the numerous scenes between Manni, Lola and the town clock, as Lola competes against time to reach Manni and save him. This is used to draw in and engage the audience and make them wonder what is going to happen next and allow them to wonder if Lola will make it to Manni in time.

This is in contrast to Shaun Tan’s book ‘Red Tree’ which shows how with time people can heal and conditions can change. In picture 3 we see the little girl in the shadow of a giant fish looming over her. Tan has used dull colours to show the gloominess of her situation. She looks small and insignificant. The fish can be a symbol for how she is feeling with its downturned face and mouth; also it looks as if it has tears running from its eyes. However in the picture there is a single red leaf in the gutter, which is a reoccurring motif in every picture, which symbolises hope.

In ‘The Red Tree’ the idea of time is present with the reoccurring motif of the red leaf. At the start of the book it doesn’t pay attention to the leaf, towards the end of the book the little girl starts to notice it and a smile begins to show on her face. This is used to represent to the reader that it takes time for a good outcome to occur, also that time play a major role in someone’s life. The use of ‘and wait’ represents that the persona is just waiting for something to happen. This makes the reader feel sorry and concerned toward the little girl.

Studying these texts has made it clear that important ideas, techniques and images in both ‘Run Lola Run’ and ‘The Red Tree’ have motivated and tested our understanding of reality, chance, time, fate and love. 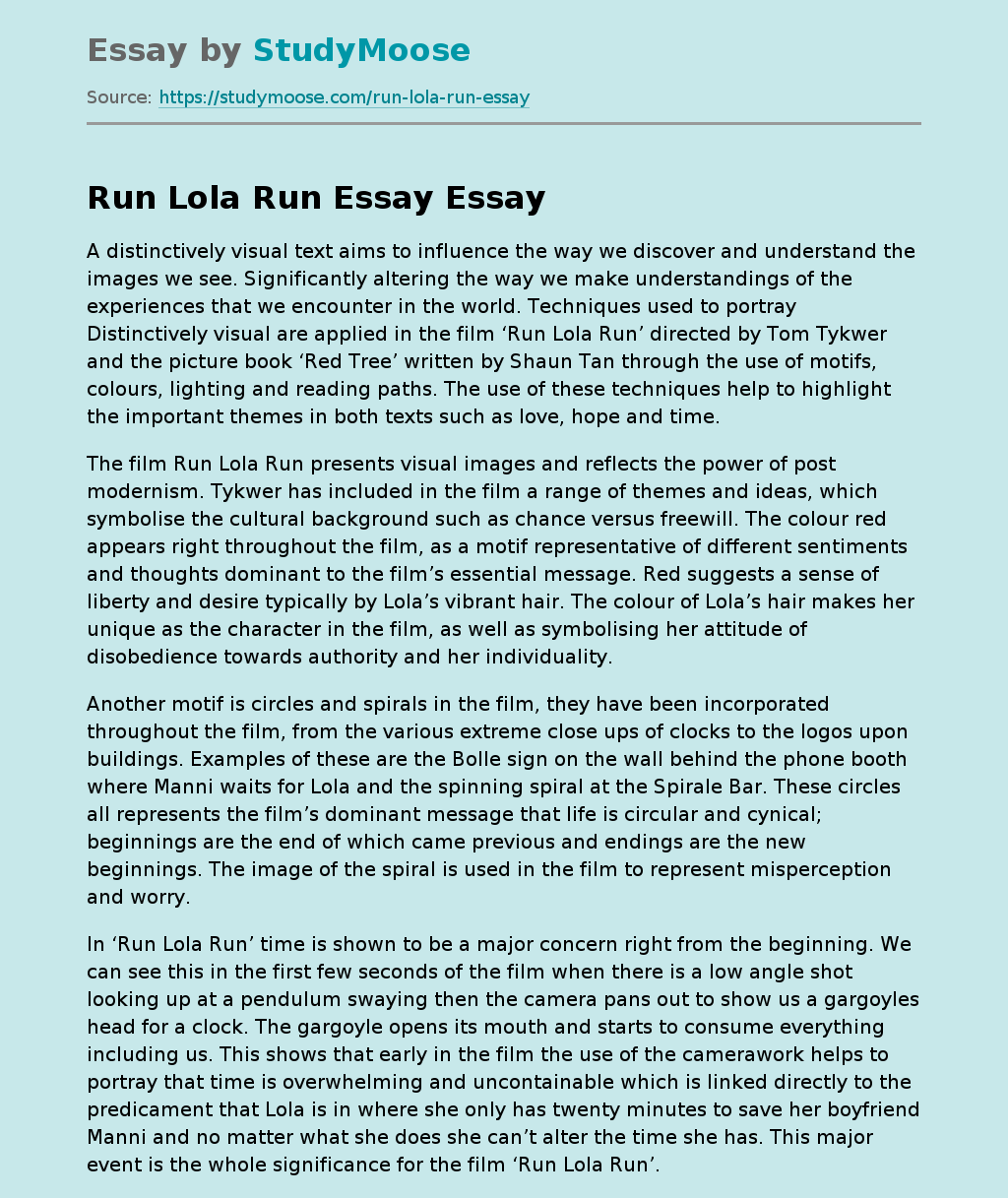