John: Run Lola Run directed by Tom Tykwer, is an intense, fast paced action film with implications about fate, love, chance, time, choice, and consequence. Not a second in this movie is boring, as it is as high paced as the title implies, whilst being both physically and mentally straining. At the beginning of Run Lola Run, two quotes are shown; one about time and the other is a philosophical statement about what a game is. These two statements viewed together arises an idea and an important concept of the movie that life is like a game.

Tykwer conveys this concept in the film through the themes of love, time and chance. Run Lola run is different to ordinary films, it is not something you would go see in the cinemas it is unique, unusual and incorporates animation creating the sense that life is a game.

The water tower written by Gary Crew and illustrated by Steven Woolman is also not your typical children’s book; there is something unusual and unique about this text due to its page layout switching from portrait to landscape conveying disorientation within the text and also through its sense of mystery and the unknown while also having to draw to your own conclusion to the story creating engagement with the reader also leaving them wanting more.

Both of these texts demonstrate distinctively visual techniques to portray distinctive experiences.

Henry: Tykwer explores the notion that love has an overwhelming ability to influence our choices. This experience exhibits how relationships shape meaning and is revealed through the distinctively visual use of the symbolic motif of the colour red.

Red has many connotations and meanings to it such as; danger, warning, passion, and love. It is seen throughout the film as it is the colour of the phone in Lola’s house, the colour of the phone booth manni uses, the ambulance, the bag the money is in, the red wash screen during Lola and Manni’s death reflections and of course Lola’s bold red coloured hair that streams behind her visually representing her as power, charisma and purpose while being a constant reminder of her passion and love for manni, and also demonstrating the danger she puts herself in in order to keep her loved one in her life.

Anything red within the film becomes the salient image due to its deliberate bright red colour which draws our attention and becomes the first subject that a viewer sees when looking at an image, this gains our attention and the object is then linked to the connotations about the colour red for example a red ambulance could mean danger as it crashes through the glass in the film and carries ill people, or the red telephone which is Lola’s source of bad information from Manni. The use of a split screen within the film visually connects Lola and manni by placing the two side by side; reinforcing that these two are a pair emotionally and physically. This split screen reveals how reliant they are on each other as manni needs Lola to save him and Lola cannot imagine life without manni. A medium shot is used here revealing an exhausted Lola desperately begging and pleading manni to wait for her. Lola and manni need each other and should be next to each other it doesn’t make sense for them to be apart.

In saying all this, Lola’s choices are influenced by her love and devotion to manni and these distinctively visual techniques highlight this experience explored by Tykwer through the two’s shared desperation. What are your thoughts john? John: Yes Henry, I can see how Tykwer has explored this, but I can also recognise how Steven Woolman the illustrator of the Water Tower has also used similar distinctively visual techniques. In the water tower, the use of a motif is also present as it is in Run Lola Run, this motif is an unknown symbol almost looking like an eyeball which gives the impression this town and the people in it are being watched while also insinuating that an alien-like presence is lurking in this small country town. This motif is seen on every page of the text and is even incorporated into some of the picture book’s layout.

The symbol is on the town’s people’s hats, the town’s machinery and household items such as water tanks; the symbol is in the towns people’s eyes and printed on their hands appointing that these labeled town’s people are also aliens while this same symbol is on the water tower itself. The front page of the water tower is very powerful, Woolman has used the colour green to emphasise the alien presence and sense of mystery. On the front cover, the water tower is the salient image which immediately gives the book a central figure and demands gaze from the reader and focuses attention. The use of framing that Woolman has incorporated on the front cover adds to the alien effect he has created throughout this text, the green water ripples are framing the water tower looking like signals being sent from a UFO and creates a sense of importance towards the water tower conveying it is the source or base of this alien presence.

These water ripples can also be interpreted on numerous pages  the book symbolising as crop circles, again creating the presentiment of an alien presence. Henry: Yes that it quite clever john. Well I can see that Tykwer has explored the experience that time is monsterous and can consume you due to Run Lola Run presenting a life-threatening situation with three alternate possible endings as to how Lola tries to resolve the crisis in 20 minutes. Tykwer has explored this experience of time being monsterous and fearful in the opening scene of a swinging pendulum of a grandfather clock, which seems to be almost taunting us as an audience. A close up shot has been used here to immediately highlight the vital importance of time in this film while foreshadowing the power and dominance that time has. The sound effect of a clock ticking loudly is intimidating and creates a sense of pressure or tenseness in such a tone that it is frightening or pumping a sense of fear at the viewer foreshadowing that what is to come ahead is to be feared. At the end of the opening scene we get consumed by the clock, this action of entering the gruesome, out of the ordinary clock, implies that the audience is entering a place where time is perceived differently than from what we normally experience.

John: Henry, drawings feature many distinctively visual techniques that allow the story to be immersive as well as being told through the distinctively visual pictures and images as well as the text. Woolman has illustrated the front cover in such a way that the water tower is viewed at a low angle shot as if it had been painted from lower down the hill from the tower reinforcing the metaphor within the written text established through the verb phrase “casting a long, dark shadow across the valley, across Preston itself.” This use of a metaphor establishes a suspenseful tone, which is supported through the distinctively visual illustrations and visual text. This low angle shot also constructs a notion of power and dominance of the tower as it is viewed from a low point as it sits on the hill higher up looking more prominent, intimidating and of high command. This makes us as the reader engaged in both the written and visual text as much as one another while also again highlighting the importance of the water tower due to its dominance over the town of Preston.

Henry: Woolman is very creative indeed john and the water tower is definitely full of successful distinctively visual techniques! Speaking of which, Tykwer explores the notion that, in life, our outcomes are influenced by what may appear inconsequential and chance encounters can have a  impact on our existence through the structure of the film being segregated into three narratives or in other words three chances to save the love of her life and restarting the game when she doesn’t like the ending. Tykwer’s use of a visual metaphor of the glass symbolically smashing, represents that the actions that one makes even if its a small action, can shatter the individual’s life or the others that are around them which can be consequential towards the individual. The montage of still Polaroid images creates a realisation of the result of outcomes due to different encounters with chance.

Lola’s choices influenced the outcomes of the lives of people within these Polaroid images, different decisions created different outcomes. Lola unknowingly caused the car accident all due to her choices, timing and chance with significantly different results in each of the narratives or ‘games’ she plays and this raises a concept that It’s not just what a difference a day makes but what a difference mere seconds make to everyone’s life John: Well henry, I think we both definitely agree that both these texts are distinctively visual and incorporate many affluent visual techniques and elements that portray distinctive experiences and encounters that engage an audience and draw them into the text. Tykwer and Woolman have done this exceptionally and have brought insight into our minds of the distinctively visual idea and concept. 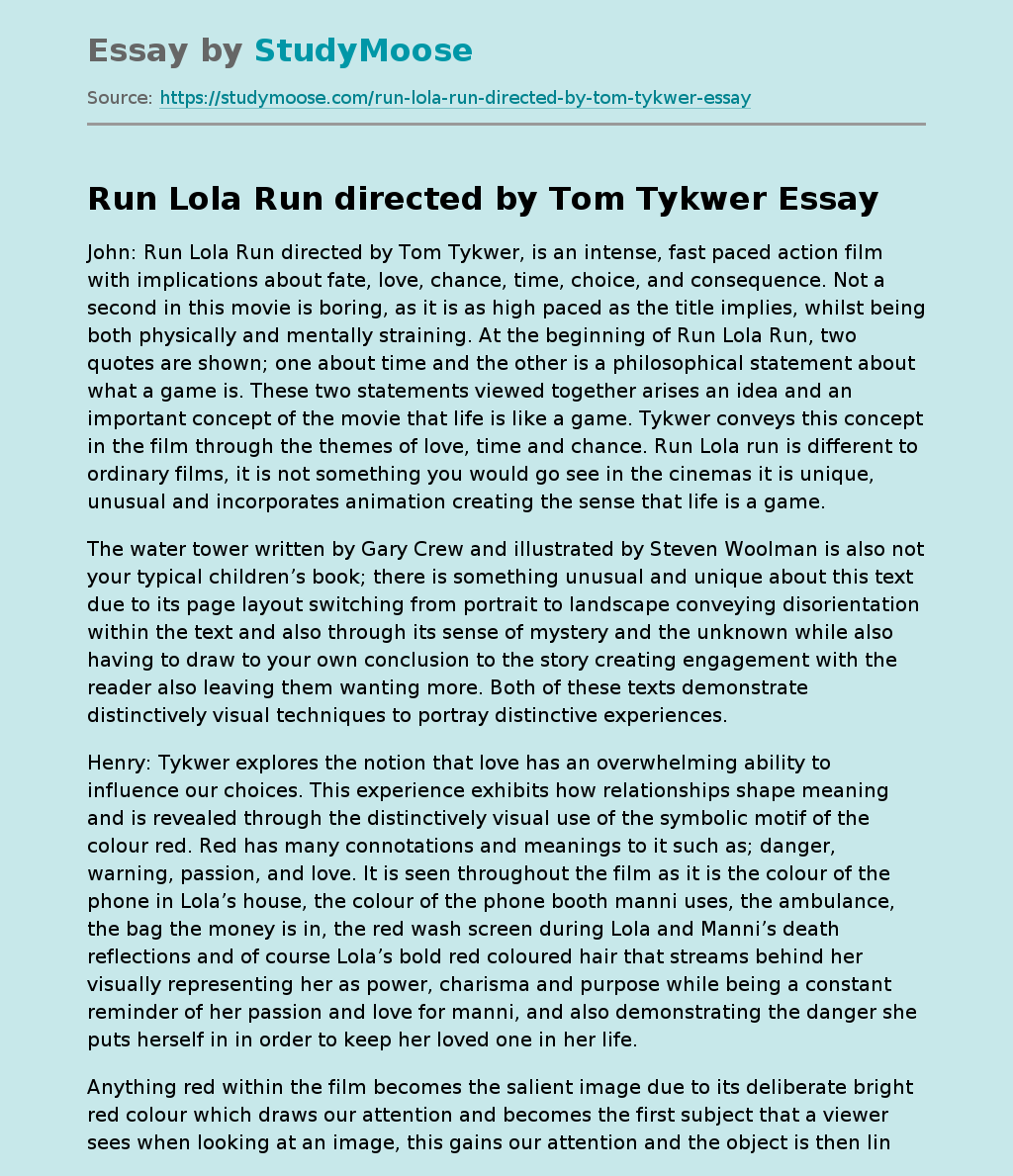