Although Olaudah Equiano’s struggle with self-identity does not apply to W.E.B. Du Bois’ concept of double-consciousness in a clearly outlined manner, his constant struggle between his African heritage and his European culture is in the same vein of thought. While Equiano is vying to be both an African and a European at once, he seems to only be able to occupy one of those identities at a time, like he is held back not only by society but also by his own perception of himself and his identities.

Don't use plagiarized sources. Get your custom essay on
“ Rudimentary Double-Conciousness in Olaudah Equiano ”
Get custom paper
NEW! smart matching with writer

As a direct result of this inward identity crisis, Equiano’s double-consciousness is most readily found in the many instances throughout his writing where he speaks of himself as being on a level lower than the Europeans but a level above other slaves, being at once the oppressed and the oppressor. He refers to other slaves as his “poor countrymen” and “poor creatures”, concurrently empathizing with and lowering their status levels (Equiano 135).

He simultaneously sees himself as a second-class citizen to the white Europeans while also actively elevating himself above his fellow slaves. Even in writing of his native nation in Africa he switches between the use of “our” and “we” when speaking of the parts of his culture Europeans may be more open to, compared to the use of “they” and “the natives” when discussing more foreign aspects of the culture, such as the concept of libations and its role in their religious practices (5-12). He is at once part of and separate from his identity as an African.

Though, Equiano’s double-consciousness may be more potent or palpable in this specific regard because he is conscious of his white audience; he chooses when to relate to them versus when to other himself as a way to appeal to them or put them at ease, so in turn they may be more receptive to what he has to say.

One of the most tangible instances of Equiano’s double-consciousness can be found in his attempt to connect the beginnings of African and Western religion; his wish to be descended from a biblical beginning most likely comes from a feeling of cultural inferiority, which itself stems from his acute awareness of ethnic difference. Equiano has an obvious and strong desire to be accepted into, what he considers to be, a dominant culture. But this desire is matched with his conscious acknowledgement of his African identity. The result of this struggle is an African man who slips into the role of a “supreme” Western person whenever he can manage. Even in the title of Equiano’s writing can evidence of double-consciousness be found. He refers to himself both in his birth name, Olaudah Equiano, and his given slave name, Gustavus Vassa; he simultaneously purports himself to have two identities while he is not wholly either identity, lifting himself to the level of his past freedom while also pushing himself down to the level of subjection. This is a pronounced instance of his “twoness”, of these two irrevocable identities that he is constantly swaying between. It is as if Equiano assimilates to European culture, but not to the idea of being European. He is European in social, cultural, and religious terms, yet he retains the view of an oppressed African, and as a result he is able to view European culture from both the inside and the outside; in other words, he has the advantage of being knowledgeable of what life is like both within and outside of the veil. So while Du Bois’ concepts may manifest themselves in Equiano in an indirect or unclear way, the connections can be made plainly evident. 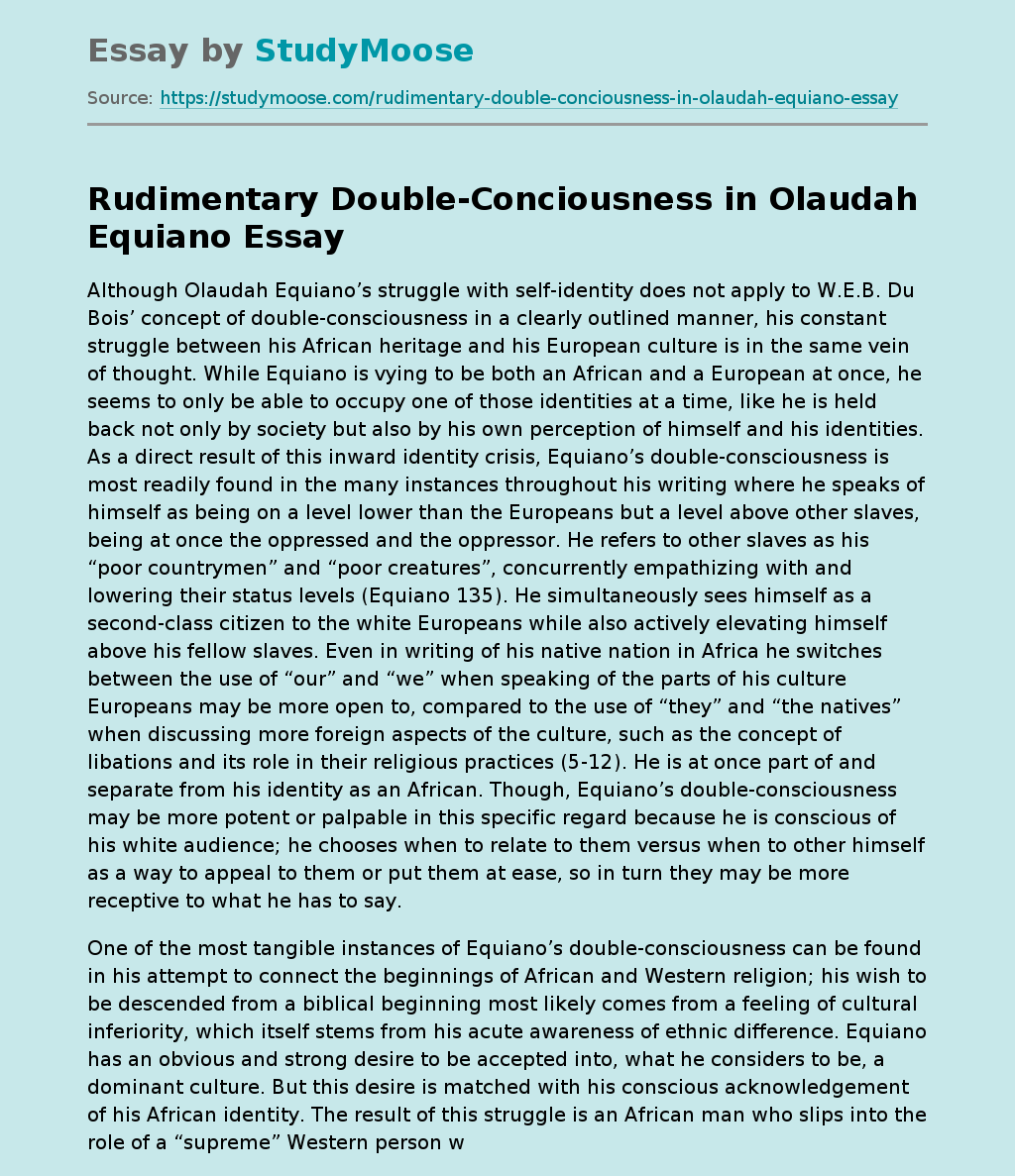