In today’s society it is quite possible for people to be accused and punished for committing a crime they didn’t actually do. It would be nice to think our judicial system is 100% accurate but unfortunately that is not the case. Innocent people are convicted of crimes they didn’t commit more often than a lot of people would like to admit. In some cases people who were later on found to be innocent have actually been put to death.

Don't use plagiarized sources. Get your custom essay on
“ Rubin Carter ”
Get custom paper
NEW! smart matching with writer

A couple examples of this would be Ruben Cantu and Carlos DeLuna. Ruben Cantu was convicted of a capital murder and investigators found out about 12 years after his death that he didn’t commit the murder and was falsely accused.

Later on detectives found out that he wasn’t even there the night of the murder. Carlos was another person who was accused of a crime he didn’t commit. Police didn’t find out till 20 years later that Carlos DeLuna was innocent and had nothing to do with a teen stabbing in Texas.

It was Carlos Hernandez, a man who even confessed to committing the crime many times that was in fact guilty. Those are just two examples of our judicial system not being accurate at all. Just because somethings may point to a person doing a crime doesn’t mean that the person actually did and there needs to be more research and evidence to back all this up especially if people are being sentenced to life sentences in prison.

Rubin Carter who was accused of committing a triple murder was in fact innocent, after almost 20 years of being behind bars. Rubin who was also a middleweight boxer other known as “The Hurricane” was arrested for the murders of three people downtown in the Lafayette which is a New Jersey bar. The night of the triple murder it was said that Patty Valentine the one who walked in on the three victims being shot had told police and detectives that she saw the car the shooters had gotten into it. Alfred Bello who was at the scene of the crime during all of this said that he was only there for robbing the cash and he had told police he saw the shooter approaching the bad and he was just in fact an eye witness.

The description of the car Patty Valentine gave matched Rubin Carters car, which is what made him a suspect in the first place. Although he pleaded his innocence the detective who was in charge of the case had a grudge against Rubin since early childhood and framed him for the crime according to Rubin, which resulted in him going to three life terms in prison. While in prison Rubin decided to write an autobiography about his life to take out his frustration and despair. His book called “The Sixteenth Round”. His novel seemed to have gotten a lot of attention from people and that’s what got it published. It also caused Bob Dylan to write a song in his name.

After 19 years of being in jail a young boy by the name of Lesra Martin reads Rubin’s book and gets so moved by the case that he convinces his foster family of Rubin’s innocence. He then decides to write Rubin a letter while he’s in prison telling him what his book meant to him and how much he believed in everything Rubin Carter was saying. The young boy Lesra finally ends up meeting him by visiting him in jail and they establish a friendship that you would never expect between a teenage boy and someone convicted of murder. Lesra Martin then puts in motion a new appeal which would eventually set Rubin free.

One thing that shows Rubin’s innocence of this triple murder case is the fact that Rubin was quote on quote “On top of the world”. He had a very high chance of becoming a heavy weight boxing champion as well as millions of dollars being in his grasps so why would he throw that all away just to be thrown into jail for three life term sentences. This was something that he has always dreamed about doing and from watching this film and learning about this trial that went on I don’t believe he would just give something like that up. To be heavyweight boxer it takes a lot of training and motivation as well as a lot of other traits and attributes to be successful, it’s not something you just get over night. Why would somebody work so hard for something like that just to have to give it up? Others may say that because of his fighting skills and violence that may cross his mind often may of lead him into doing such a violent crime but that is definitely not enough evidence to accuse someone of doing such a crime.

Another thing that helps shows that he was not guilty was just the way he treated the people that worked endlessly to get his freedom. He didn’t want to bring anyone down with him and didn’t want anyone to go out of their way for him especially if he knew it wasn’t going to get him anywhere in the end. He showed a lot of mental strength while being in prison and seemed pretty positive despite what was happening. The way he ignores everyone who accuses him, just accepts everything how it is and accepts that he has to do the time even though he is innocent really shows the character of him and may not scientifically prove his innocence but definitely lessens him.

This last reason doesn’t necessarily prove Rubin was innocent but shows how easy it was for him to be an easy target for this crime. The place and the time that all this occurred was a very racist time and a lot of people would agree that a black person was more likely to be accused of a crime then a white person. Rubin was framed by racist detective, police and prosecutors. His boxing career, his background, and the colour of his skin made him the perfect target of this crime and that is why he was involved in the first place. The jury of this trial was all white which is unfair at that time because of the amount of racism that went on in that time.

A couple other things I’d like to add that really shows Rubin carter’s innocence was that the night of the murder one of the victims that was in the hospital actually got to identify the suspect. This was Rubin, they asked the victim to tell the police if it was him who murdered the people and shot him. The victim told the detectives that it was not Rubin who committed the murder but because of the state that the victim was in (blind in one eye and very hard seeing through the other) they did not take his word for it and Rubin Carter was still said to be guilty. This is a very unfair judgment Rubin was also put through numerous test and lie detector tests and passed all of them.

Overall from looking at all the pieces of evidence that show Rubin Carters innocence and looking at the reasons why Rubin was accused and convicted in the first place really does prove that he is not in fact guilty. Just because he was black and the description of the shooter was black was not a good enough reason to make him a prime suspect. Either was the car description a valid reason. There were other people who could have been suspected but because of his skin colour it was a very racist assumption. For such a serious crime with really long consequences they needed to put a lot more time into the trial and get more evidence to prove the case. Rubin was just a black middleweight boxer who happened to be in the wrong place at the wrong time which led to such critical consequences. 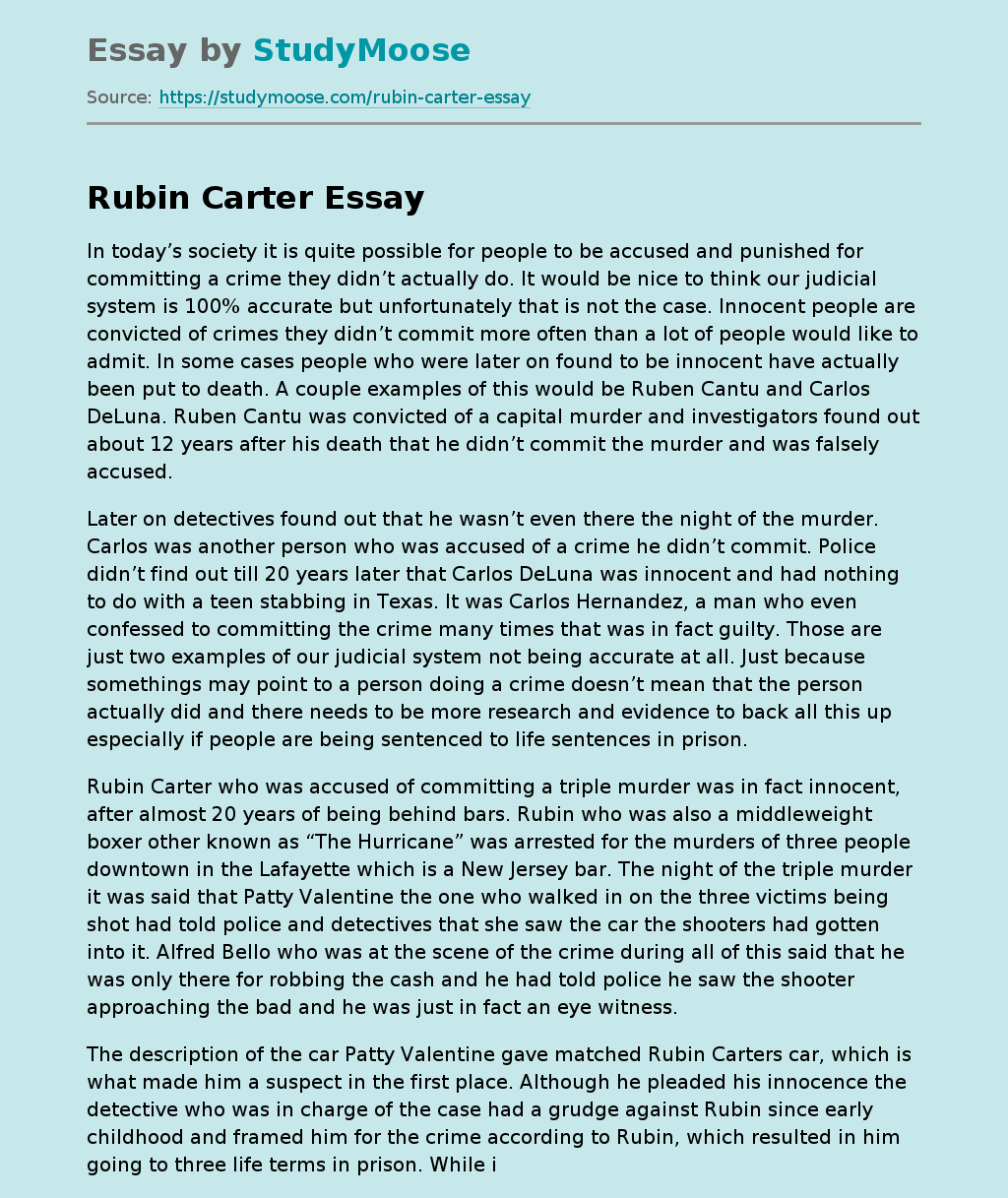