William Faulkner was not only one of the greatest Southern writers of all time but one of the great American authors of all time. His works have long been criticized and analyzed for their deeper meanings and themes. One of his most analyzed works is his short story “A Rose for Emily”. While Faulkner uses numerous techniques and strategies which include the chronology of the story, his strongest weapon is his usage of the narrator as an omniscient gossip. Thomas Dilworth says that “the narrator is as important to the plot as Emily Grierson.

Don't use plagiarized sources. Get your custom essay on
“ Rose for Emily Analysis ”
Get custom paper
NEW! smart matching with writer

Whether this is true or not, the narrator is an important part that helps makes the story what it is, a great Southern short story. While the narrator is never narrowed down to a specific person he seems to speak as a representative of the community and it is apparent that he knows everything about Miss Emily and of every event that happens in the small town.

Proficient in: A Gap Of Sky

By seeing everything that the narrator sees, we get to see all the happenings throughout the story, but this view isn’t always objective. The narrator’s bias and opinions bleed through the narration.

“In the process of telling it, he implies his own and his society’s cultural values, which influence attitudes and behavior toward Miss Emily in a way that implicates him and the townspeople in her fate”(Dilworth). By his talking about how the town pities Miss Emily it makes you feel pity for her also.

The narrator plays a sort of antagonist in the story with his opinions of Miss Emily. If you believe everything the narrator tells you in the story it allows him to skew the story in any way in which he seems fit.

By making you listen to the narrator’s thoughts Faulkner makes you listen to his own thoughts. For example, the following line, “Then we said, “She will persuade him yet,” because Homer himself had remarked–he liked men, and it was known that he drank with the younger men in the Elks’ Club–that he was not a marrying man”(Faulkner) is interpreted quite different from an objective line such as “Homer drank with the younger men in the Elk’s Club, and wasn’t the marrying type “.

The second statement raises no question of Barron’s sexuality while the narrator does raise that question in the first sentence. Homer’s sexuality is never actually stated or proved but it does force you to keep the possibility in your mind as you read the rest of the story. James Wallace states “To believe that the narrator here reveals something true about Homer is to become exactly like the narrator and his society of gossipy, nosy neighbors”(Wallace).

Little subtleties such as this one sway your outlook on the characters and the story in general and whether realized or not change the way you read the story. With immense skill and rhetoric Faulkner successfully inputs the narrator into “A Rose for Emily” changing the complexion on the story and transforming it into the classic that it is now, a gothic tale of Southern Society.

Dilworth, Thomas. “A Romance to Kill for: Homicidal Complicity in Faulkner’s ‘A Rose for Emily’.Studies in Short Fiction. 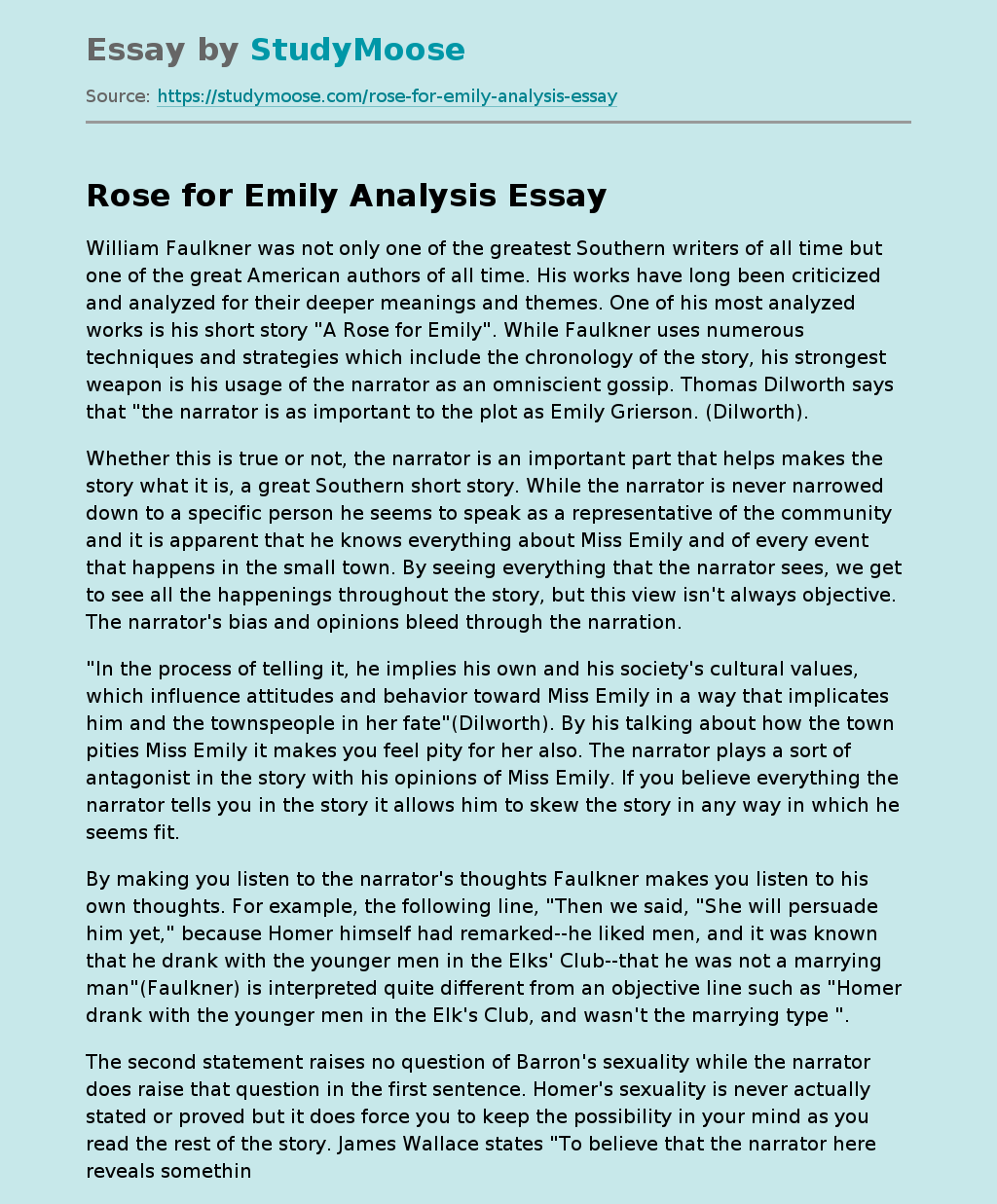