Categories: Romeo And Juliet
Download paper
Download
Essay, Pages 3 (734 words)
Views
182
S1-Why is Friar Laurence reluctant to marry Paris to Juliet?
Friar Lawrence is concerned because Paris does not “know the mind” of Juliet. In other words, Paris doesn’t know if she wants to get married to him.
S1-How does Paris explain the sudden haste of the marriage plans?
Paris explains that it is a good thing to rush the marriage because a long “mourning period” and extended sadness is dangerous. Paris explains that Capulet is smart to rush the marriage to stop Juliet’s crying.
Turn in your highest-quality paper
Get a qualified writer to help you with
“ Romeo & Juliet: Act IV Study Questions ”
Get high-quality paper
NEW! AI matching with writers
S1-What is ironic about the conversation between Juliet and Paris?
Juliet and Paris talk about love and confession of love to Friar Lawrence. Juliet actually confesses her love for Romeo to Paris, but he remains unaware of her “confession.”
S1-If Friar Laurence cannot help her, what does Juliet threaten to do?
Juliet tells the Friar that she will kill herself by letting the “bloody knife play the part of the umpire.
Get quality help now

S1-Why does Friar Laurence think that Juliet will accept his plan?
Friar Lawrence thinks that Juliet will accept his plan because she is so willing to die rather than marry Paris. The Friar thinks that his plan that feigns death will be a good solution to the problem.
S1-Describe the friar’s plan for Juliet.
The Friar tells Juliet to go home and tell her parents that she is willing to marry Paris. After she tells them the news, she is to go into her bedroom and drink a vial of liquid.
Get to Know The Price Estimate For Your Paper
Topic
Number of pages
Email Invalid email

The liquid that she drinks will stop her pulse and turn her skin cold. Juliet will appear to be dead for 42 hours, after which she will wake up from a “pleasant sleep.”

S2-What does Juliet say that makes her father happy?
Juliet tells her father that she was wrong to disobey him. She asks him for her forgiveness and tells him that she will do whatever he asks of her.
S2-How does Juliet show her maturity and independence in this scene?
After hearing Juliet’s willingness to marry Capulet, he decides to move the wedding. The wedding will now be held the next day. This creates a problem in the timeline the Friar has established for the poison and notification of Romeo
S3-If the potion does not work, what will Juliet do?
At one point in the scene she questions whether she is doing the right thing. For only a moment she hints at asking the nurse for guidance with her decision. Juliet decides to go through with the plan established by her and the Friar without consulting anyone else.
S3-If the potion does not work, what will Juliet do?
As she has stated in the previous scene, Juliet will use a knife and take her own life if the poison does not work.
S3-What are some of the fears Juliet has about the potion?
Juliet is afraid the Friar may have mixed the potion incorrectly. She thinks it may be poison. Juliet also worries that she will wake up in the tomb before Romeo comes to save her. This worries her because she is not sure if she will have air inside the tomb causing her to die of suffocation. She also comments on the rotting body of Tybalt that is lying in the tomb.
S4-What is happening in this brief scene?
Scene IV is a very brief scene that shows all of the Capulets planning for tomorrow’s wedding. The servingmen are preparing logs for the fire and setting tables. The cooks are working in the food that will be served to the guests.
S5-Describe the imagery Shakespeare uses in describing Juliet’s “death”?
“Her blood is settled, and her joints are stiff” – lividity and rigor mortis
“Death lies on her like an untimely frost upon the sweetest flower” – Frost will kill plants and flowers
S5-What does Friar Laurence say to comfort the Capulet family?
Friar tells the Capulets that heaven gave them Juliet, now heaven has a need for her and she will experience eternal life; therefore, we should be happy for her since she is resting in heaven.
S5-What even are the Capulets now preparing for?
The Capulets are now preparing for a funeral instead of the wedding. Capulet indicates they will use the same food and table settings; however, they will play sad music as his “joys” are buried. 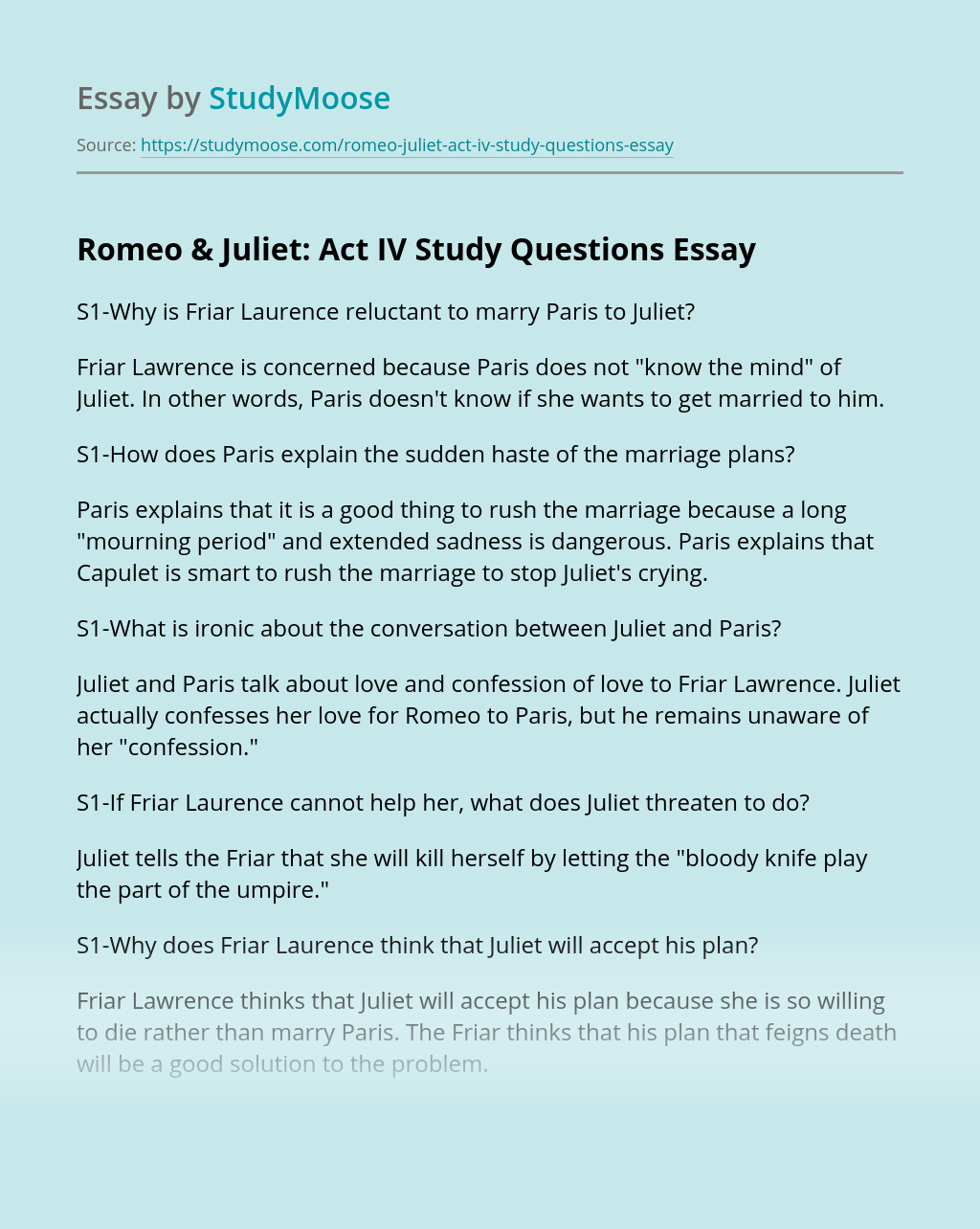 Turn in your highest-quality paper
Get a qualified writer to help you with
“ Romeo & Juliet: Act IV Study Questions ”
Get high-quality paper
Helping students since 2015
Stay Safe, Stay Original