Romeo and Juliet - Zeffirelli and Luhrmann

The two main film interpretations of Shakespeare’s “Romeo and Juliet” are Zeffirelli’s, made in 1968, and Luhrmann’s, made in 1997. Although they use the same original script written by Shakespeare, these two films are very different. Zeffirelli’s is set in the 16th century, at the time when the screenplay would have first been written whereas Luhrmann has set his film in modern time but still using the Shakespearian language. The most popular and well-known scene of “Romeo and Juliet” is the balcony scene where Romeo and Juliet first declare their love for each other.

Don't use plagiarized sources. Get your custom essay on
“ Romeo and Juliet – Zeffirelli and Luhrmann ”
Get custom paper
NEW! smart matching with writer

Luhrmann’s version of the balcony scene is started with a shrill crash as Romeo enters the Capulet’s house and knocks a post to the ground. This gains the audiences attention immediately for the scene. Romeo’s movements are clumsy and speech is fast-paced and raspy. Romeo escapes outside and awkwardly attempts to climb a vine below Juliet’s window. The camera pans out frequently to show the view of their entire Capulet estate, this shows the importance of where they are as it’s a forbidden area for Romeo to be.

Romeo’s inept actions put a brief comical twist into this classic tragedy. From Juliet’s window, a small figurine of the Virgin Mary can be seen for a short time through the curtains. This has a strong symbolic meaning, showing the contrast between Romeo and Juliets sexual intentions and a sense of purity and religion.

It could also be a symbol of warning meant for Romeo and Juliet.

When Juliet is first seen in the Lurhmann version, she is the complete opposite of Romeo. Juliet is wearing a flowing white dress, signifying her innocence and inexperience; she delicately exits an elevator and begins to speak her lines with full use of facial expressions, acting confused and stressing the unimportance of names. Romeo jumps out abruptly and the serenity of Juliet looking over her swimming pool is broken by her shocked high-pitched scream. The two fall together into the pool with the same startling affect used at the opening of the balcony scene, grabbing the attention of the audience. The sudden movements are quickly slowed as Romeo and Juliet start to talk.

Their words are hurried and there is an obvious need for secrecy which is stressed by the security cameras and guards surrounding the area. Their kisses are romantic and loving but not lacking passion. Juliet is suddenly struck with fear of being caught with Romeo and with another sudden movement, she leaves the pool. The scene ends romantically and with both Romeo and Juliet feeling happy. Throughout the film, Romeo and Juliet are both on the same level, showing that their characters are equal at this time. The romantic feel is constantly interrupted by sudden movements or noises to keep the audiences concentration, making the film interesting to watch.

Zeffirelli starts the balcony scene with Romeo gazing longingly at Juliet who is on her balcony dreamily staring across her garden. Romeo’s lines are whispered, romantic and spoken very slowly and softly. The scene is shot through the leaves to show the mystery and danger of Romeos being there. The bright light silhouettes Juliets figure like an angel. Juliets dress is low cut and quite revealing making her seem mature and seductive, which is very different to Luhrmann’s interpretation of Juliet as his is very innocent. When Juliet first sees Romeo, her actions become quick, rushed and sudden. Juliet spends the entire When Romeo and Juliet share a kiss it is sexually motivated and very passionate. Romeos movements become excited and quick as he swings from trees.

Romeo and Juliet - Zeffirelli and Luhrmann. (2016, Jun 25). Retrieved from http://studymoose.com/romeo-and-juliet-zeffirelli-and-luhrmann-essay 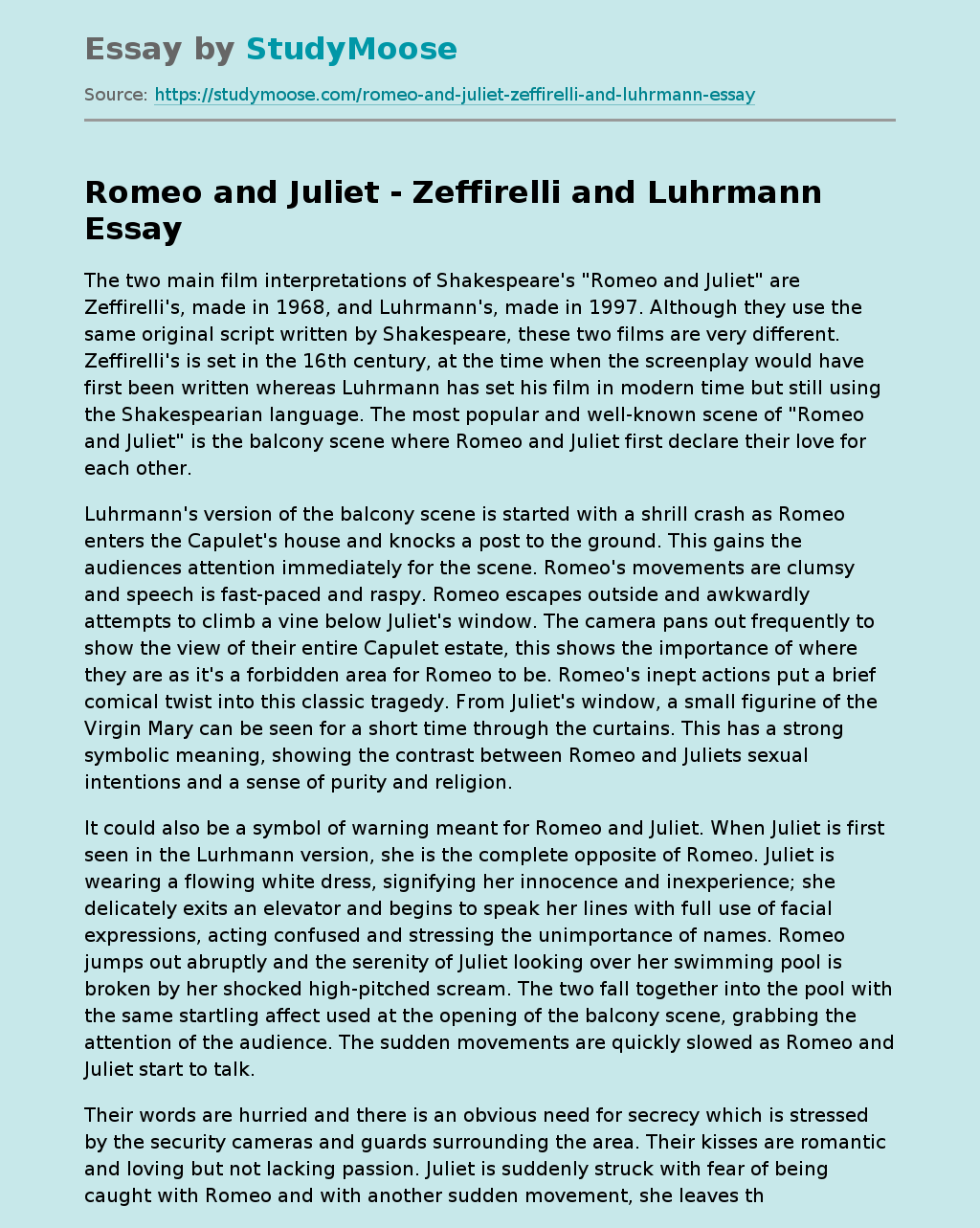