At the beginning of the scene, why does Benvolio think that there will be a fight?
It’s hot outside, and the Capulet’s are out and about
What does Mercutio acuse Benvolio of in lines 15-30
He has just a quick a temper as anyone else
When Tybalt and Mercutio first begin arguing, what does Benvolio try to get them to do?
Stop fighting or take it somewhere else (private) so they won’t get in trouble with the Prince
What does Tybalt call Romeo?
a villain
Why won’t romeo fight Tybalt?
He loves Juliet, and doesn’t want to fight anyone of that household
What does Mercutio think the reason Romeo refuses to fight?
he is a coward
Why does Mercutio keep repeating, ” A plague o’ both your houses?”
If Romeo would’ve fought he wouldn’t be dying
What does Romeo say that Juliet’s love has done to him?
made him feminite
Why does Romeo call himself “fortune’s fool”?
because when he had the dream before going to the ball it showed death
When Benvolio relates to the Prince what happened, what does he say Romeo tried to do before Mercutio was killed?
To ward Tybalt off
What does Lady Capulet accuse Benvolio of?
Lying because he’s a Montague
What is Romeo’s punishment for killing Tybalt?
banishment
Why is Juliet so impatient for the Nurse to return?
She wants to know the latest news on Romeo
Describe Juliet’s rapidly changing attitude towards Romeo in this scene.
Get to Know The Price Estimate For Your Paper
Topic
Number of pages
Email Invalid email

Don't use plagiarized sources. Get your custom essay on
“ Romeo and Juliet Study Guide Act 3 ”
Get custom paper
NEW! smart matching with writer
First, she is upset with Romeo for killing Tybalt.
Get quality help now
Marrie pro writer

Then she is affectionate towards hi, because he is her husband, and she should defend him. Then she feels yearning for him

What piece of news has upset Juliet the most?
Romeo’s banishment
What does the nurse promise to do?
Go and get Romeo to comfort a suicidal Juliet
How does Romeo react to the news of his banishment?
He is ungrateful because everyone else will get to see Juliet, but he won’t
Romeo tells Friar Laurence that he cannot know or understand how he feels. Why?
Friar has never felt real love before and he has never loved someone else
What argument does Friar Laurence use to prevent Romeo from killing himself?
Juliet’s alive, Tybalt’s dead, and he got a lighter punishment
What plan does Friar Laurence reveal to Romeo?
Go and see Juliet, but leave immeaditly, go in the morning and disguise himelf
What does the Nurse give to Romeo
the ring from juliet
What does Capulet tell his wife to say to Juliet?
Juliet will be getting married to Paris on Thursday
As Romeo is preparring to leave Juliet, what argumetn does she use to convince him to stay?
it is still night, because she hears the nightingale
What is it that convinces Juliet a bit later that Romeo should leave?
She doesn’t want him to die because of her
Just as Romeo is about to descend the rope ladder and leave Juliet, what does Juliet say about the way he looks?
he looked pale and like he was in a tomb
Why does Lady Capulet think Juliet is crying?
Because Tybalt is dead
After Lady Capulet breaks the news about Paris, what is Juliet’s response?
She doesn’t want to marry Paris on Thursday
she would rather marry Romeo (whom Lady Capulet thinks is her enemy)
If Juliet’s mother does not arrange to delay the marriage, what will Juliet do?
kill herself
What is Capulet’s reaction to Juliet’s threats?
he threatens to kick Juliet out, and to hit her
What is the Nurse’s advice to Juliet
Forget about romeo and marry Paris
How does Juliet’s attitude change toward the Nurse?
she is never going to trust her again
What “scheme” does Juliet devise to get rid of the Nurse and to get out of the house?
she needs to go to shrift
Suzanne Pittman
Share 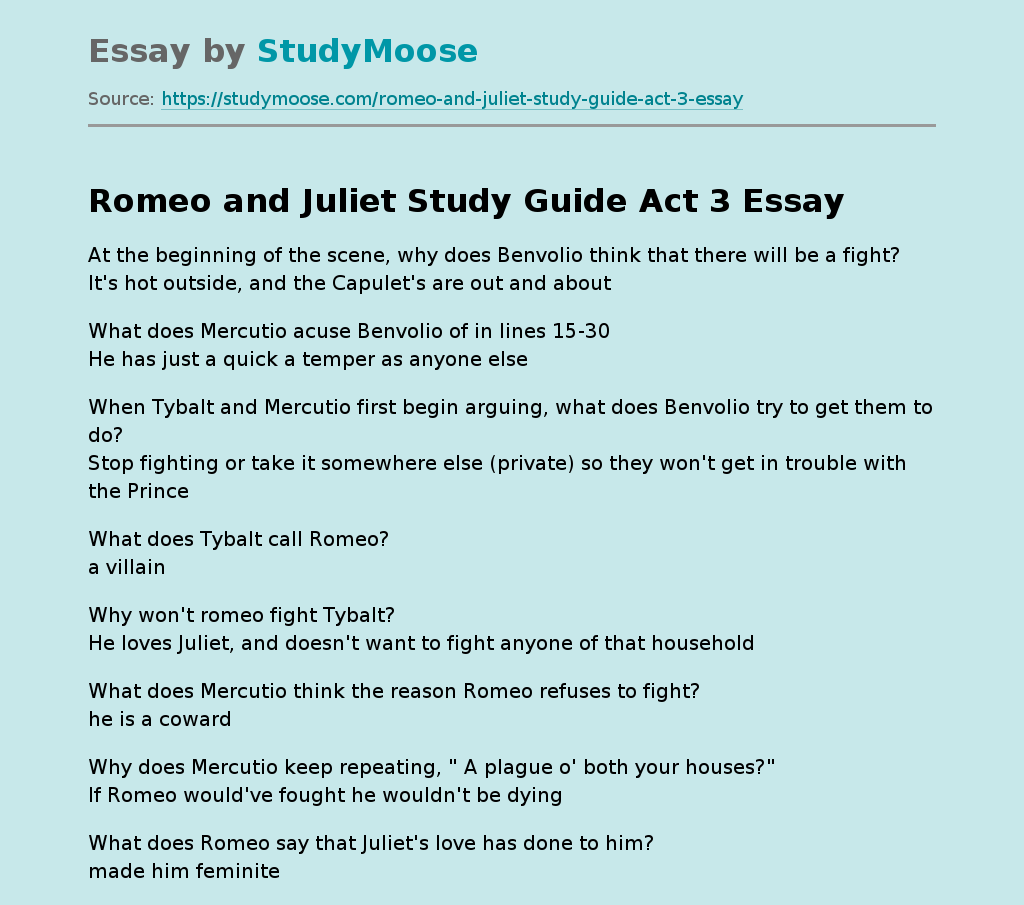