In what city does the play take place?
Verona, Italy
Why are Romeo and Juliet called “star-cross’d lovers”?
They are thwarted by fate through influence of the stars
Who is fighting at the beginning of the first scene?
The Montague and Capulet servingmen
Who tries to break up the fighting?
Benvolio
What threat does the Prince make to Lord Montague and Lord Capulet
He threatens to kill them if they are caught fighting again
Benvolio and Montague describe the way Romeo has been acting.
Don't use plagiarized sources. Get your custom essay on
“ Romeo and Juliet Study Guide Act 1 ”
Get custom paper
NEW! smart matching with writer

What do they have to say about him?

Romeo is depressed, isolated, and secretive
Why is Romeo so sad? Explain.
Because he loves a girl but she does not love him back
What is Benvolio’s advice to Romeo?
He advises him to forget her and find someone else
Why does Capulet think it will be easy for Montague and him to keep the peace?
Because they have the same punishment and are older/more mature now
What does Paris ask about Capulet? What is Capulet’s first answer? What does he change his mind to?
Paris asks for consent to marry Juliet (at first Capulet says she is too young, but later he tells Paris to ‘woo’ Juliet at the party)
What problem does the servant have?
He cannot read the list
What is the name of the woman Romeo loves?
Rosaline
What do Romeo and Benvolio decide to do?
They go to the party to meet girls
How old is Juliet?
13 (almost 14)
When Lady Capulet asks Juliet how she feels about marriage, what is Juliet’s answer?
Juliet does not think about it
Following Juliet’s answer, what does Lady Capulet then tell Juliet?
She tells her that she should at least meet Paris
According to Mercutio, who or what is Queen Mab, and what does she or it do?
She is a dream-giving midwife of fairies
What does Mercutio say about dreams?
He says dreams are not indicative of real life
What is Romeo’s mood at the end of this scene? Explain.
Get to Know The Price Estimate For Your Paper
Topic
Number of pages
Email Invalid email

+84 relevant experts are online
Hire writer
Romeo is apprehensive because he believes he will die as a result of tonight’s events, yet he is accepting and believes he is in fate’s hands
What does Romeo think of Juliet the first time he sees her?
He thinks she is the most beautiful girl in the world
How does Tybalt recognize Romeo?
He recognizes Romeo’s voice
When Tybalt is ready to seize Romeo and throw him out of the party, what does Capulet say to Tybalt?
Capulet says Romeo should be allowed to stay because he is a good man (he is avoiding a fight)
Explain what the conversation is between Romeo and Juliet.
They discuss (in a metaphor/sonnet) praying & kissing
How does Romeo find out Juliet’s last name?
He asked the Nurse Juliet’s mother’s name
How does Juliet find out Romeo’s last name?
She tells her Nurse to find out.
Marta Beck
Share 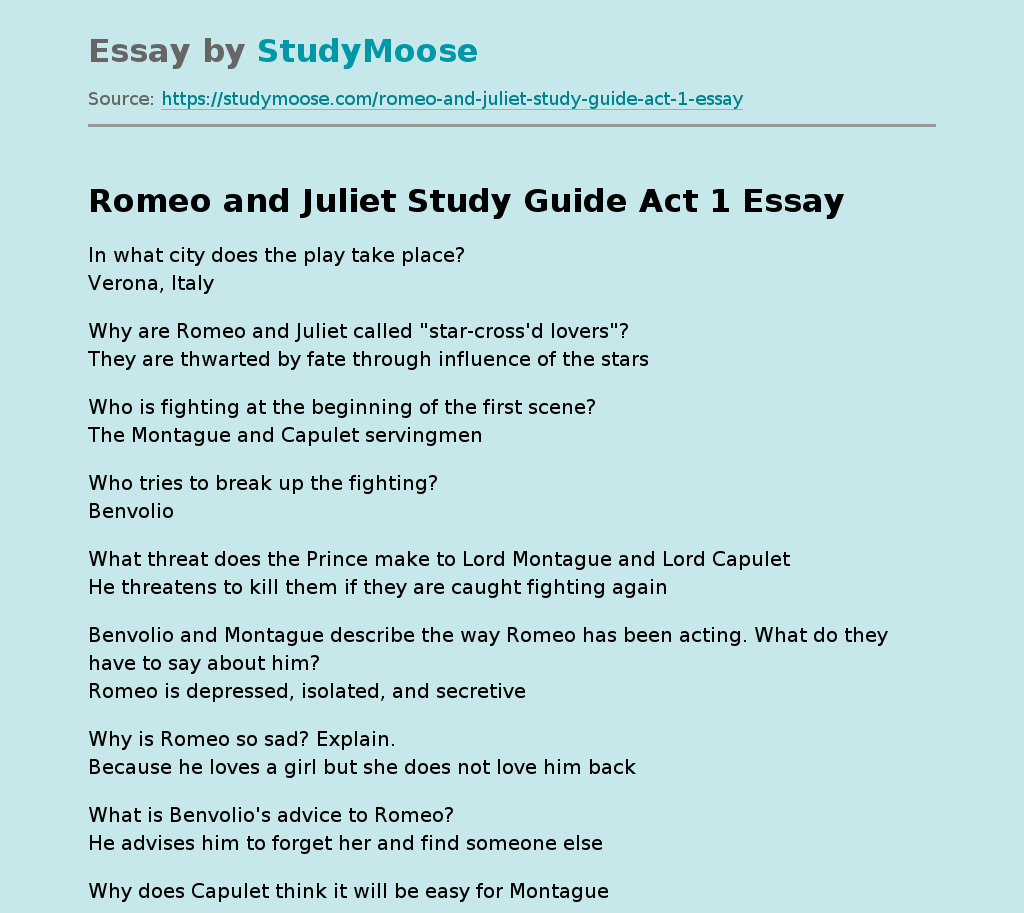