Don't use plagiarized sources.
Get Your Custom Essay on ﻿Romeo And Juliet Friendship Essay Just from $13,9/Page

Shakespeare presents Romeo and Mercutio’s friendship as frivolous and light-hearted but caring. Shakespeare shows this through the dialogue when Mercutio says, “Nay gentle, Romeo, we must have you dance.” Mercutio is trying to cheer Romeo up to have fun and forget about Rosaline. Shakespeare uses the imperative “must” to suggest to the audience that there is control in the friendship as Mercutio wants Romeo back to himself because Mercutio thinks Romeo has lost his way and needs to be brought back to himself.

Romeo and Mercutio’s friendship is presented by Shakespeare as a caring friendship. This is shown to the audience when Mercutio says,” Prick love for pricking , And you beat love down.” Mercutio is giving Romeo advice ,which is to fight back at love for giving him heartache ,which shows the audience the care in their friendship and that Mercutio wants to see Romeo happy, again, showing the audience he cares. Shakespeare uses repetition of the word “love” to reinforce that Mercutio’s view of love is different to Romeo’s showing the differences in their friendship and that they aren’t the same as they have different personalities.

Shakespeare uses the metaphor, “Prick love for pricking, And you beat love down.” This metaphor is used by Shakespeare to imply that, again, he is giving him advice to move on which shows even more care in their friendship. Shakespeare uses foreshadowing, which is that love is violent, to tell the audience that Romeo will get over his heartache as he moves on to love Juliet. The audience may feel that Mercutio genuinely cares for Romeo and wants him to be happy, even though they have different views on love, but they may feel it’s not the best friendship as Mercutio doesn’t offer Romeo the sensitivity he needs.

Shakespeare presents Romeo and Mercutio’s friendship as caring in and witty and sarcastic way. This is shown to the audience by Shakespeare when Mercutio says,” you are a lover borrow cupid’s wings and soar with them above common bound.” Mercutio is trying to cheer Romeo up in a sarcastic way to try and make him laugh and show Mercutio wants him to enjoy himself, which shows the audience that he cares. Shakespeare uses the metaphor,” borrow cupi’s wings and soar with them above common bound.”

The metaphor is advice to imply to the audience that Romeo is cupid in the situation as he falls in love easily and he needs to be free from love and fly away from it to be back to himself. The metaphor also is giving the audience an insight into his character, which is that he falls in love all the time telling us he is a romantic. Mercutio is being serious but trying to make it seem a joke to cheer Romeo up telling the audience that he does care for Romeo by being sarcastic in a funny and witty way, but meaning no harm.

Romeo and Mercutio’s friendship is presented by Shakespeare as a loyal friendship. This is shown by Shakespear through the dialogue when Romeo says,”and fire-eyed fury be my conduct now!” This tells the audience that Romeo is loyal to Mercutio is loyal to Romeo. Shakespeare uses alliteration “fire-eyed fury” which used to reinforce how frustrated Romeo is and “fire-eyed fury” is used as a metaphor by Shakespeare to reinforce how angry Romeo is. Puncuation is also used to show Romeo’s anger to the audience, “!”. The word “conduct” is used by Shakspeare to foreshadow the impact of Tybalt’s death, where Romeo killed Tybalt because Tybalt killed Mercutio when Mercutio was protecting Romeo, which shows the audience the loyality in Romeo and Mercutio’s friendship. This may make the audience feel that Shakespeare is foreshadowing that love wont be as easy and because Romeo is angry it may hint to the audience that it is something to do with his actions.

Shakespeare presents Romeo and Benvolio’s friendship as a caring and reliable friendship. This is shown through the dialogue by Shakespeare when Benvolio says,” I’ll pay that doctrine or else die in debt.” Benvolio is the more emotional friend who you would rely on as he cares for Romeo’s sensitive side and his emotions. The use of the verb “die” is used by Shakespeare to tell the audience how much Benvolio cares and would do anything for Romeo as he loves unconditionally, as they are cousins.

I think that both friendships are good friendships to have, nut Romeo and Benvolio’s friendship was best because he was a more emotional friend and he cared more for Romeo’s emotions. Benvolio also shows the audience that he cares a lot for Romeo in a better way than Mercutio does and is more reliable than Mercutio. I think the audience feels that Mercutio doesn’t take Romeo’s feelings seriously sometimes even though he cares a lot but isn’t a friend you would rely on. The audience think Romeo and Mercutio’s is better because Benvolio is too serious and isn’t as humorous as Mercutio, but Benvolio is really just being mature and is doing what’s best for Romeo. 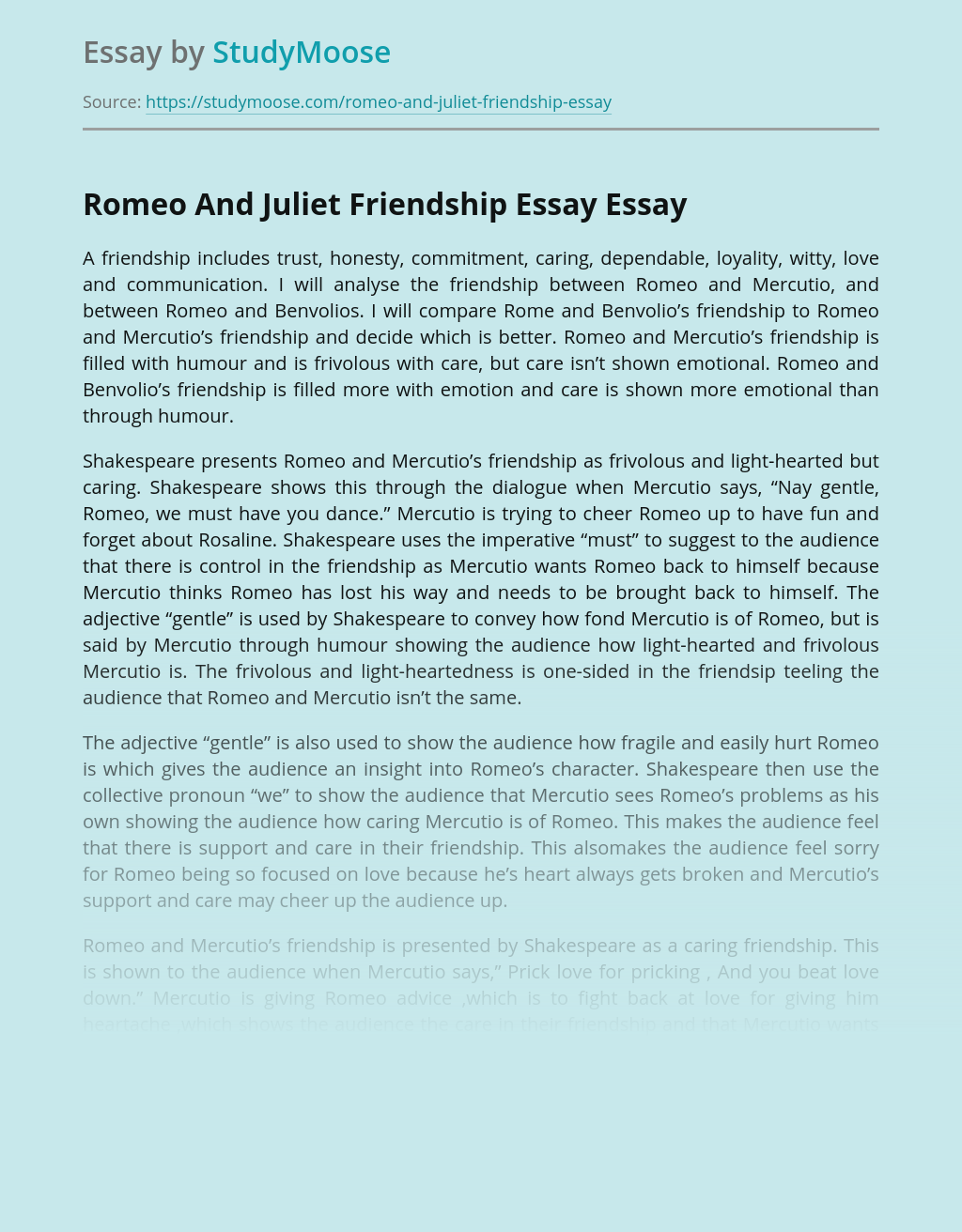 Titanic (1997) is a wonderful love story based on real life events, as told by Rose, the main character of the story. Kate Winslet captured her character beautifully, acting as if she were really in a higher class in 1912. Most of this movie takes place on the Titanic, although some of it takes place...

Living just for existence has never been the objectives of my life.I have always looked forward to get the best out of my life. As a student of Bachelor of Technology in E.I.E(Electronics&Instrumentation Engineering), I look to graduate study to widen my ken, which would facilitate in fulfilling my ambition of doing Master’s program in...

Get Essay
It’s more fun in the Philippines

During the late 1800 hundreds, a community of people in religious manner came together to explore the culture in a religious like, campground. As time progressed in this are, larger crowds became amass due to the increased amount of attractions imp laced in the area, drawing in large crowds well over 150,000 per season(annually). Soon...

Comparing the Efficiency of Punishment versus Rehab AJS/502 Comparing the Effectiveness of Punishment versus Rehabilitation Two objectives in the criminal justice system are that of rehabilitation and punishment, and society reserves high expectations the system will live up to those expectations. Everyone in the criminal justice field and the public have concepts and viewpoints on...