Tybalt
Juliet’s cousin
Friar John
was quarantined in a sick house and couldn’t deliver a message to Romeo
Mercutio
put a curse on both houses as he was dying
Paris
asks permission of Juliet’s father to marry her
Friar Lawrence
makes potions out of herbs he collects
apothecary
sells poison because he is poor
Lord Montague
Romeo’s father
Lady Montague
dies from grief over Romeo’s banishment
Lord Capulet
wants Juliet to wait 2 years before marrying
Rosaline
girl Romeo loves at the beginning of the play
Benvolio
Romeo’s cousin and the play’s peacemaker
Lord Capulet
character who is a good host
Nurse
the character who usually acts as messenger between Romeo and Juliet
Tybalt
character who kills Mercutio
Paris
character who scatters flowers at Juliet’s grave
Prince Escalus
ruler of Verona
Friar Lawrence
receives “confessions” of the two lovers
Juliet
apologizes to parents for disobedience
Mercutio
dies by Tybalt’s sword
Paris
seeks parental consent to marry
Romeo
dies from drinking poison
Balthazar
brings wrong message to Romeo
Juliet
dies by dagger
He is upset and wants to fight him
How does Tybalt react when he sees Romeo at the Capulet party?
Mercutio
Which character ridicules the Nurse when she comes to deliver Juliet’s message to Romeo?
Romeo
Who places Paris’s body near Juliet’s?
Friar Lawrence
Who runs away from the Capulet monument in fear?
Nurse
Who finds Juliet’s “dead” body in her bed chamber?
Tybalt-mean, fighter, against Romeo.

Don't use plagiarized sources.
Get Your Custom Essay on Romeo and Juliet final test review Just from $13,9/Page

Makes him the true antagonist

Who might be considered the villain in the play?
Romeo
Who kisses Juliet at the Capulet’s party?
Rosaline
Who do Romeo’s friends think he might be with after the Capulet party?
banishment
What punishment does the Prince set for Romeo after the second street fight?
Verona
In what city does MOST of the play take place?
Mantua
To what city does Romeo go near the end of the play?
Tybalt
Whom does Mercutio call the King of Cats?
It wont work
It’s poison
She’ll suffocate in the tomb
She’ll go mad waiting for Romeo in the tomb
What fears does Juliet experience before taking the potion?
Friar Lawrence
Who gathers herbs and knows what to do with them?
1564
year of Shakespeare’s birth
1616
year of Shakespeare’s death
The Bard
Shakespeare’s nickname
Stratford-on-Avon
In what city was Shakespeare born?
The Globe
What was the name of Shakespeare’s theater?
72 percent
What percentage of Shakespeare’s plays are written in poetic form?
*72 percent in poetic form
*Language has changed so much from his time
*Sentence structure was manipulated to fit the rhyme and meter of his poetry
Name a reason his plays are difficult to read
Anne Hathaway
Name of Shakespeare’s wife
Personification (the sun and the moon as ladies that are envious of each other)
“Arise, fair sun, and kill the envious moon…”
soliloquy
Juliet’s speech just before she drinks the poison
Assonance (rhyming EE sound in grief, brief, thee)
“It were a grief so brief to part with thee”
foreshadowing
“These violent delights have violent ends”
personification (death eating)
alliteration (repetition of D sound)
“then love devouring death do what he dare”
alliteration (repetition of C sound)
“He’s the courageous captain of compliments”
Foil (they are opposite characters – peacemaker vs.

Benvolio and Tybalt in the same scene
exposition
Act I
rising action
Act II
turning point/climax
Act III
falling action
Act IV
resolution (also known as denouement)
Act V
dramatic irony
When Juliet is talking about Romeo and he is below the balcony but she doesn’t know it
pun (soles of shoes vs. sad inner soul)
“You have dancing shoes with nimble soles. I have a soul of lead…”
personification
“Death is my son-in-law, death is my heir”
allusion (Aurora – goddess)
“Should in the farthest East begin to draw the shady curtains from Aurora’s bed”
rhyming couplet
“My only love sprung from my only hate! Too early seen unknown, and unknown too late”
allusion (Venus – goddess of love)
“Speak to my gossip Venus one fair word”
Mercutio
“Oh, then I see that Queen Mab hath been with you…”
Juliet
“You kiss by the book…”
Romeo
“He jests at scars that never felt a wound”
Nurse
“There’s no faith, no trust, no honesty in men…”
Romeo
“Then, I defy you stars!”
Friar Lawrence
“Women may fall when there’s no strength in men…”
Capulet
“I tell thee what, get thee to church o’Thursday or never after look at me in the face”
Nurse
“Then hie you hence to Friar Lawrence’s cell. There stays a husband to make you a wife”
Mercutio
“Ask for me tomorrow and you shall find me a grave man”
Prince
“For never was there a story of more woe than this of Juliet and her Romeo”
Juliet
“My only love sprung from my only hate, too early seen unknown and known too late”
Romeo
“Did my heart love till now? Forswear it sight, for I ne’er saw true beauty till this night”
Benvolio
“Compare her face with some that I shall show, and I will make thee think thy swan a crow”
Tybalt
“This by his voice should be a Montague. Fetch me my rapier, boy…”
Romeo
“But soft, what light through yonder window breaks? It is the east, and Juliet is the sun”
Juliet
“What’s in a name? That which we call a rose by any other name would smell as sweet”
Capulet
“He bears him like a portly gentleman, and, to say truth, Verona brags of him to be a virtuous and well-governed youth.” 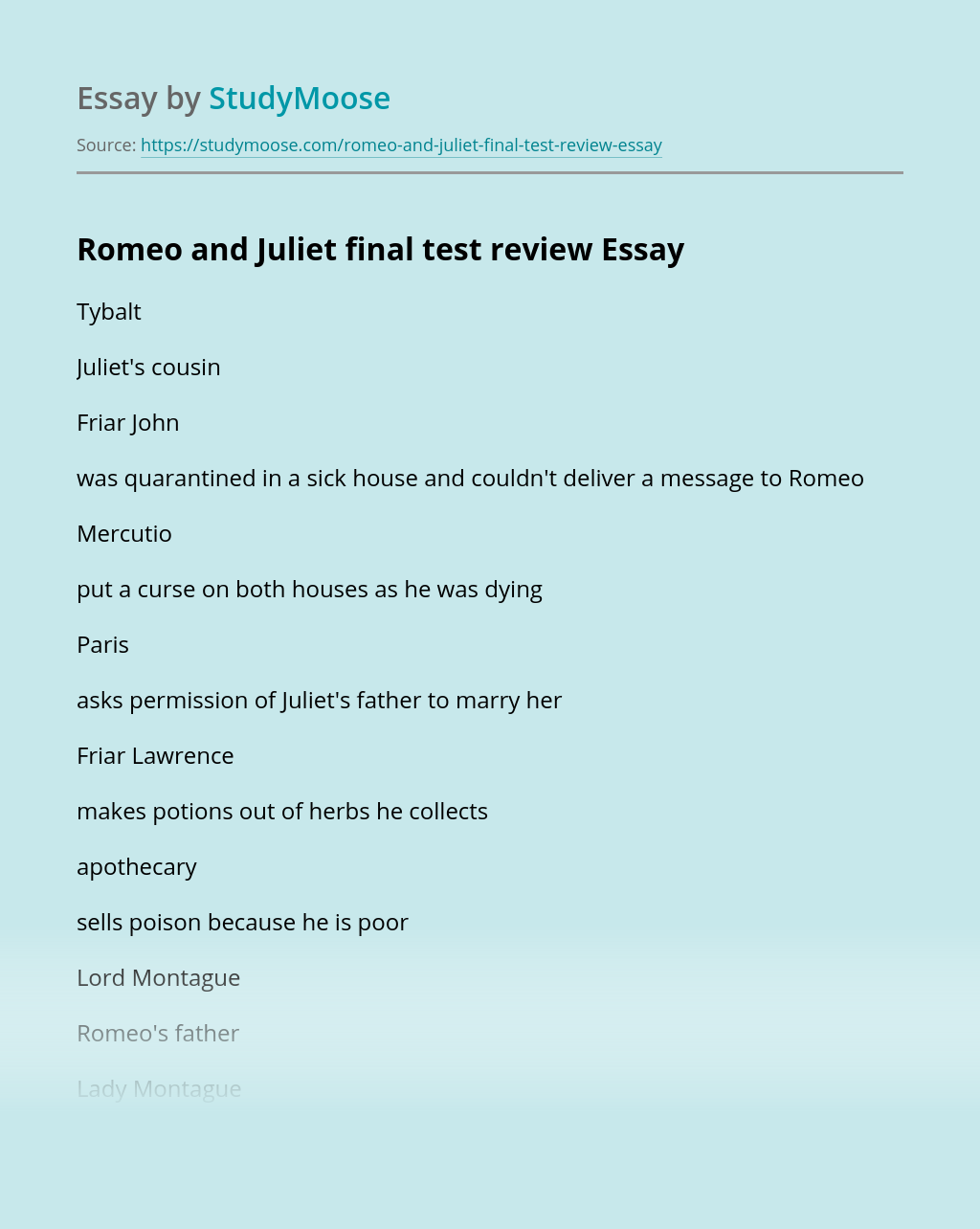 A1. The nursing profession has evolved significantly over the decades. One of the factors that have greatly influenced these changes has been the involvement of nurses in the development of theories and data base needed to support the advancement of our profession. In the last half of the twentieth century, nurse researchers (1950s) and nurse... VIEW ESSAY

View sample
Get Essay
Discrimination Based on Sexual Orientation Presentation

Discrimination is prejudice toward members of minority or subordinate groups without considering the effects of prejudice and discrimination, discrimination often affects minority groups on the basis of age, race, religion, sex, sexual orientation, etc. If a person or group of people are treated unfairly in areas of public life such as employment, recruitment, customer service... VIEW ESSAY

In todays world, web accessibility isnt just nice perk but is an actual necessity. Accessibility is important no matter what part of life it includes, whether its inclusion in schools, public areas or the internet. Being able to appropriately access websites leads to more and better information, which in turn leads to a more independence... VIEW ESSAY