“Romeo and Juliet” is a romantic and astounding play, which describes lofty and pure love of two young people. In its essence, love is an inexpressible and indescribable feeling, for the sake of which people breathe: a feeling, which encouraged noble knights to sacrifice their lives, to perform heroic exploits in honor of love to their ladies; a feeling which prompts affectionate person to donate the whole world to the beloved one; a feeling owing to which people lose their heads, and make thoughtless, and frantic actions; a feeling to which people surrender themselves completely.

Main Themes in Romeo and Juliet 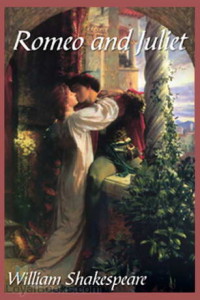 Write an analytical essay on one topic. In your answer, make detailed reference to the play as a whole and support your answer with well chosen illustrative evidence.

PUBLISHER · Thomas Creede (in the Second Quarto, using the title The Most Excellent and Lamentable Tragedie, of Romeo and Juliet)

CLIMAX · The deaths of Romeo and Juliet in the Capulet tomb (5.3)

ANTAGONISTS · The feuding Montagues and Capulets; Tybalt; the Prince and citizens of Verona; fate

POINT OF VIEW · Insofar as a play has a point of view, that of Romeo and Juliet; occasionally the play uses the point of view of the Montague and Capulet servants to illuminate the actions of their masters.

FALLING ACTION · The end of Act 5, scene 3, when the Prince and the parents discover the bodies of Romeo and Juliet, and agree to put aside their feud in the interest of peace.

Romeo – The son and heir of Montague and Lady Montague.
Juliet – The daughter of Capulet and Lady Capulet.
Friar Lawrence – A Franciscan friar, friend to both Romeo and Juliet.
Mercutio – A kinsman to the Prince, and Romeo’s close friend.
The Nurse – Juliet’s nurse.
Tybalt – A Capulet, Juliet’s cousin on her mother’s side.
Capulet – The patriarch of the Capulet family, father of Juliet.
Lady Capulet – Juliet’s mother, Capulet’s wife.
Montague – Romeo’s father.
Lady Montague – Romeo’s mother.
Paris – A kinsman of the Prince.
Benvolio – Montague’s nephew.
Prince Escalus – The Prince of Verona.
Friar John – A Franciscan friar charged by Friar Lawrence with taking the news of Juliet’s false death to Romeo in Mantua.
Balthasar – Romeo’s dedicated servant.
Sampson & Gregory – Two servants of the house of Capulet.
Abram – Montague’s servant.
The Apothecary – An apothecary in Mantua.
Peter – A Capulet servant.
Rosaline – The woman with whom Romeo is infatuated at the beginning of the play.
The Chorus – The Chorus is a single character who, as developed in Greek drama, functions as a narrator.

The tragedie of Romeo and Juliet : a frankly annotated first folio edition / William Shakespeare ; annotated and with an introduction by Demitra Papadinis
Shakespeare, William, 1564-1616